Newsletter
Sign Up today for our FREE Newsletter and get the latest articles and news delivered right to your inbox.
Home » 1973 Schwinn Sting Ray – A Bike to Ride and Show 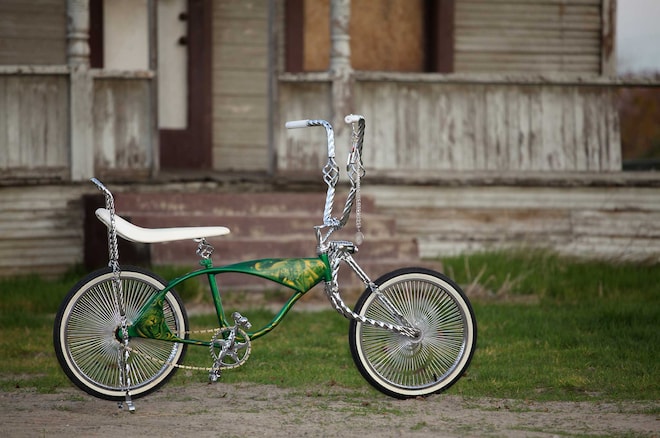 Jovan Valenzuela was hooked in the lowrider scene after his first time going to a car show with his uncles. Jovan bought himself this ’73 Schwinn frame in hopes of building it and becoming part of the scene. “It became my dream to have a lowrider bike. I wanted to build it to go out to car shows and go riding with people who enjoy the scene,” Jovan says. He began the build but found himself overwhelmed with the amount of time and money it would take to build one. He began losing motivation and interest in it. That all changed when he saw his cousin Damian Trevizo building his three-wheeler. “His build gave me the motivation to finish mine.

“I decided to go with an Aztec theme, not because that’s what everyone does but because that is part of my culture and I’m proud of it.” Murals of Aztecs were airbrushed throughout the bike. Jovan did a twisted with birdcage look throughout the bike because that is a style that he fell in love with when he was younger and always wanted it. “I didn’t build the bike for points, I built it for myself. If it gets me points great, but I won’t be adding anything to it just for points.” The build has taken him over a year and over $1,000 and he still isn’t done with it. The bike wouldn’t be where it’s at now without the help of his uncle Steve Trevizo, who has been helping him along the way.

Nathaniel Cox always had a lifelong goal of being featured in Lowrider but he didn’t know what it would take until a chance meeting with Lowrider Magazine editor Joe Ray.

Rides Strong Family Lineage Motivated The Build Of This 1963 Schwinn

In the Valerio family you springboard into the lowrider culture in only one way: you buy and build a lowrider bicycle.

Whether it be a home, a lowrider, or a young adult, laying a solid foundation is a fundamental part of the process.