Newsletter
Sign Up today for our FREE Newsletter and get the latest articles and news delivered right to your inbox.
Home » Custom Bicycle – Spawn 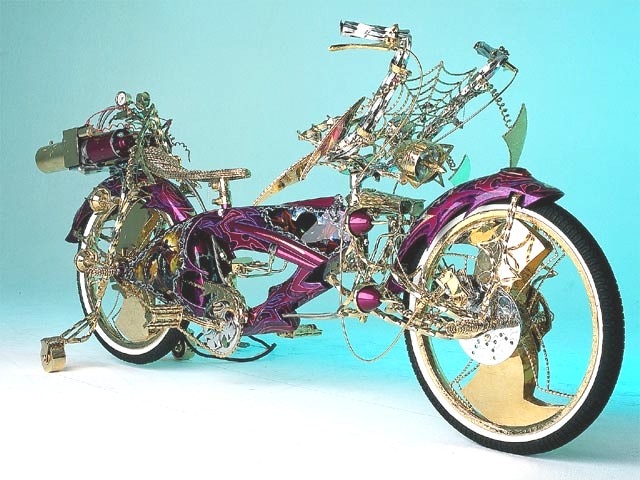 The West family of San Francisco, California, are no strangers to the lowrider community. You might have seen them grace the pages of Lowrider Bicycle Magazine back in the Winter ’98 issue. Since then, the father and son duo has not held back in trying to win the prestigious Lowrider Bicycle of the Year title. Their first bike, “Storm,” fell short of First Place, finishing a respectable Second. This never discouraged the Wests, who always regroup and come out stronger the next time.

With the top prize in mind, Angus and his dad John started from scratch. They acquired a cherry ’66 Schwinn Sting-Ray frame and then started to think about what they would do with this new bike. John works as a production painter at Don’s Auto Body in San Francisco, and made time to start modifying the 20-inch frame. First on the agenda was to incorporate hydraulic cylinders into the bike. This was done using 4-inch “stroke” cylinders which stretch out the frame at the hit of a switch. John then worked around the main modification and started to mold the rest of the frame. When John was done, he had a custom tank and rear skirts complemented by molded fenders. After ensuring that the work was perfect, the frame was sealed and painted in candy violet shades.

The frame was then left to cure before being shipped to “Fonzie” of Los Angeles, California, who muraled four scenes on the frame, included the mysterious comic action figure Spawn from which the bike gets its name. The frame was then pinstriped and gold leafed before being carefully re-clearing one last time. John then proceeded to leave the frame looking like glass (it would receive even more TLC when it was rubbed out). The buffed-out frame was then accessorized with custom parts that were made by John, including 20-inch rims, pedals, seat, handlebars and hydraulic-fitted forks. The raw pieces were shipped to Electro Form in Richmond, California, where the crew there made sure that the metal pieces would receive a show finish in combinations of chrome and gold. The two-wheeler was taken to Juanito in San Bernardino, California, who stitched up a monster display and custom seat.

After two years of building, the Finest Kreations members were ready to bust out. The duo made their debut in their hometown of San Francisco, where they dominated their class at the Lowrider Magazine Anniversary Tour show. With their first win under their belts, the Wests were ready to head to Las Vegas, Nevada, where to their surprise they repeated their Frisco feat. As you can see, the outcome was the prestigious Lowrider Bicycle of the Year title, which they plan to vigorously defend next year.