Newsletter
Sign Up today for our FREE Newsletter and get the latest articles and news delivered right to your inbox.
Home » Two Wheeler Custom Bicycle – Drag-N’s Gold 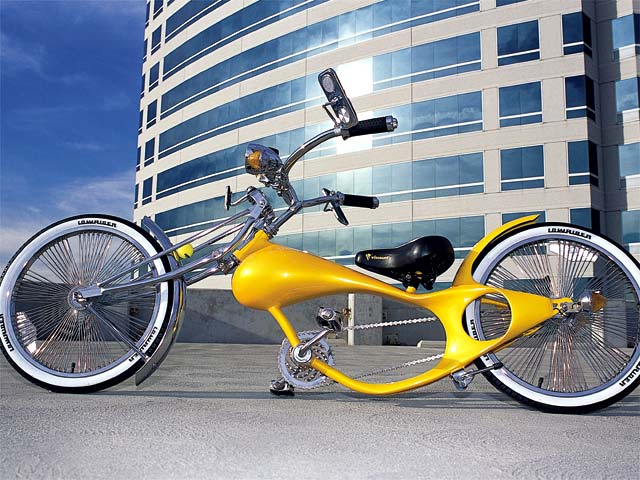 In medieval mythology, dragons were always the guardians of some sort of treasure. Some say it’s precious stones, others magical elements, but more often than not, dragons are the guardian of gold. The bike that you see before you, “Drag-n’s Gold,” started out as a gift from the folks at Lowrider Magazine and Aztlan Bicycle, Inc. in Pomona, California.

Armando M. Avila II, now age 15 of South Gate, California, built the new 20-inch Aztlan Cruiser when he was 11 years old at the Lowrider warehouse in Pomona, California. When the last nut was tightened, Armando took his first ride on the Cruiser around the Lowrider parking lot. Little did he know that his short ride around the parking lot would spark an obsession. No sooner did he get home; Armando was on the two-wheeler every day, cruising down the streets. As with anything that can be customized, Armando got the bug to turn the already cool bike into something really special.

Enter Joseph “’50’s Joe” Garcia and his family of the Drag-N Shop of Santa Fe Springs, California, who offered to do some “mild” custom bodywork on the bike. Well, anyone who knows Joseph knows that “mild” actually means “wild.” A customizer by trade, Joseph added a bulb-shaped gas tank to the split bars on the frame of the bike. Not content with that, the rear fender was cut and molded to the frame. The center post was removed and rear ports were added on each side of the frame, and the crank housing was moved forward 12 inches.

After a quick check the bike was ready to be lowered. Now don’t be fooled with the extensive modifications, this bike is all metal with a little Bondo (body filler) used to smooth out the grinder marks. Joseph added a 10-degree rake to the bike by cutting the main bar and pushing down on the frame. As more and more modifications were added, it was becoming apparent that this bike was starting to look like a Harley-Davidson… one of Armando II’s favorite motorcycles.

With the bodywork completed, it was time to think about paint. Little Ruben Ochoa of Duran’s Quality Painting in Baldwin Park, California, laid down a sweet-lookin’ butterscotch color over the frame. Victor Hernandez of Aztlan Bicycle, Inc. replaced some parts and added a couple more here and there to really bring the theme together. An expert in his field, Victor bolted the original Aztlan Cruiser parts back on the bike and added an extended chain to fit the new position of the Aztlan twisted 4-inch one-piece crank.

To keep with the Harley-Davidson theme, Victor added two Aztlan amber bee lights with visors on each side of the original Lowrider Bicycle bullet light. For more of a motorcycle look, he also added two more bee lights to the rear and a set of black handgrips with a chrome skull caps to the 20-inch Beach Cruiser handlebars provided by Slam-N-Ride in Pico Rivera, California. Finishing up with the Aztlan Bicycle 26-inch classic straight spring fork, the bike really took on the aggressive styling of a Harley!

More plans are in the works for this Lowrider-Harley-Davidson miniature, and with inspirations like Mike Berg’s bike “New Attitude,” it’s going to be a hard act to follow. If you check out the May 2000 issue of Hot Bike Magazine, you’ll notice that Mike Berg’s custom motorcycle on the cover has a similar look and the same color. While there are always ideas in the works for customizing, for now, clean is how the Drag-n’s Gold bike stands. Armando would like to give thanks to Alberto Lopez and the staff of Lowrider Magazine, Aztlan Bicycle, Inc., the Drag-N Shop and at the folks at home for all that they did for him.