Newsletter
Sign Up today for our FREE Newsletter and get the latest articles and news delivered right to your inbox.
Home » Custom Wood Bicycle – Woody 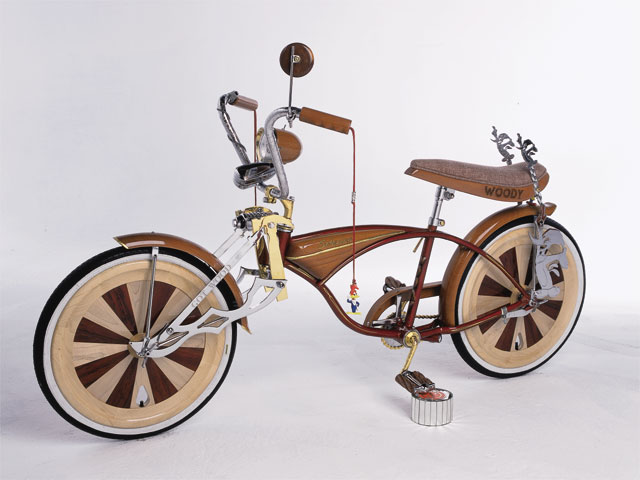 Three years ago, we caught a glimpse of the “Woody” bike owned by Iran Mestas of Chino Hills, California. Iran has come a long way since then, redoing his pieces to make one of the top bikes in the Street Custom category. As a custom furniture maker, Iran used all of his carpenter’s skills to do up his bike in a different fashion than others. And as we all know, wood is good.

Iran first started off by sketching out cool bike designs that would soon be crafted out of solid pieces of wood. Once all of the sketches were done, his next step was to transform these one-dimensional drawings into a 3D fixtures. The first thing that was crafted was the two-piece front tank out of redwood. Iran then gave the tank a smooth finish before it was bolted on to the sunburst with flake painted frame, which was painted by Iran’s father, Francisco Mestas. With the front tank finished, it was time to move on to other things, like his handcrafted accessories.

The trickiest thing to make was the custom bullet light. Iran spent countless hours on the light himself, along with his father trying to get it down to specs. The next thing that Iran tackled was the chain guard, which was carefully drafted and then cut out of a piece of wood to the exact shape and form. By this time, Iran was getting good at cutting out wood so he decided to do the bike’s mirror next. Iran didn’t know what he got himself into, as it turned out to be a little more difficult than he had thought. Iran actually made two or three mirrors before he finally got the one that he wanted.

But the adventure continued for Iran, who wanted to get even more creative and so had some pieces custom made. Consulting his friend Randy Beard for a good laser cutter, a guy named Joe was recommended to take up the task of cutting.

But this was no ordinary Joe who cut out all of the pieces, including the hammer and nail forks, and the Woody Woodpecker sissy bar. Once he got back all the laser-cut items, Iran had them dipped in gold and chrome by Meliton at Advance Tech Plating in Placentia, California. Meliton handled all of his pieces with much respect, giving them a show-quality finish. Iran’s buddy and fellow Legions club member Hernan D’Aloia handled the engraving. If you’re thinking that Iran was at the end of his building stages you’re wrong! He had more in mind.

Wanting to make his bike as unique as possible, Iran decided to redo the seat and fenders once more. Already knowing how to do them, he had them done in the matter of weeks. He then gave the seat, chain guard and front tank back to Joe, whose laser cutting included “Woody” alongside the seat. As for the tank, Joe laser cut Schwinn on both sides, while the chain guard sported the combination of both Schwinn and Woody. Iran also sent out his frame for artwork by Eliezer of Santa Ana, California. Eliezer added some small murals that would give him the extra points needed when it came down to judging.

With plenty already down, Iran wanted to see what else could be done. How about some wood rims? Iran quickly jumped on the opportunity gluing two different kinds of wood together and then rounding them on a lathe and adding hubs as well. As we all know, your bike must brake according to the Go-Lo rulebook. So Iran made his rear wheel have a coaster brake, enabling him to stop at any time. For the last feature, Iran made a set of twisted pedals. It sounds easy, but not when they’re made out of wood!

Iran’s bike was now complete and ready to hit the show circuit. Since starting his bike four years ago, he has come a long way and would love to thank the following people for all of their help and support. He would like to start off with his father for helping him discover his hidden talent in woodworking, his mom for being behind him 110-percent of the way, Joe for laser cutting all of his pieces, Hernan for applying his engraving skills to those parts and a super special thanks to all of the boys in Legions B.C.