Newsletter
Sign Up today for our FREE Newsletter and get the latest articles and news delivered right to your inbox.
Home » 1948 Taylor Tot Stroller – Blue Heaven 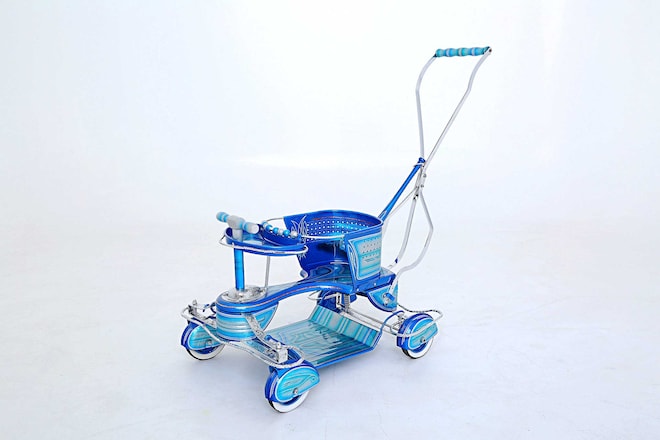 When you hold to heart the passion of lowriding and family values, then the welcomed addition of a baby brother is more than good news. So after the necessary cheers and celebratory shots are done and over with, the only thing left to do is figure out a gift to welcome him to the world.

For Angel Viramontes, the good news sent him and his father on a scavenger hunt that ended at the Pomona Swap Meet. It was there they found a Taylor Tot that was in rough condition. Rusted, tattered, and looking like a relic that was resurrected from the sea, they bought the bike and immediately went to work. They started by stripping it down to bare metal and fixing any rust spots that needed to be patched. Once complete, it was prepped, primered, and splashed with an Oriental Blue.

But just as they started to assemble the bike, Angel thought for a second that it could’ve been done better so the bike was stripped down once again and that’s when Angel shot it again—this time with Candy Oriental Blue with the addition of teal patterns.

Happy with the end results, he dropped the Tot over to Rick Munoz and that’s where he added a custom mural of Dodger Stadium, complete with the L.A. skyline on the backrest of the seat. Since the front and rear axles were removed, they then decided to have them sent out to Engrave It and it was there each of them were carved up, chromed, and then installed to complete the yearlong build.

Once fully assembled and detailed, they took a step back, admired the bike, and already had the perfect name: “Blue Heaven.” In all, this custom cruiser is sure to have other kids feeling blue, and it also serves as the starting point of yet another generation of lowriders who will continue to carry on the tradition, the family values, and the creativity found within our lifestyle.