Newsletter
Sign Up today for our FREE Newsletter and get the latest articles and news delivered right to your inbox.
Home » 1967 Chevrolet Impala Convertible – Drop it Like It’s Hot 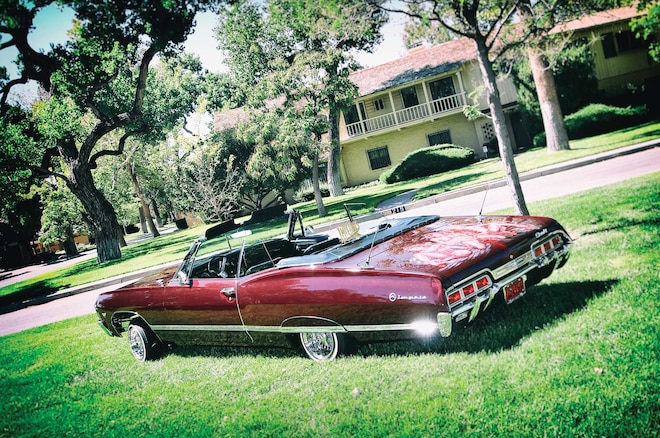 Andrew Chavez, of Albuquerque, New Mexico, isn’t one to brag about himself or tell many his life story, however, the rocky road that brought him to where he’s at now should be shared. Andrew opened up to LOWRIDER magazine and explained that he was not always a good person, and he admits he went through some hard times when he was younger. He was not only involved with street gangs, but illegal drug use. Heroin just about took his life, but fortunately, a stint in prison was a big wake-up call that made him realize that he took his free life for granted. While there, he recalled happier times when he was into lowriding and cruising. He realized what he lost and he wanted to go back to that time when cruising a lowrider brought him nothing but joy and happiness.

Andrew turned to God and prayed that he could find his way out of the mess he got himself into. With hard work and determination, Andrew eventually got himself away from drugs and out of the gang life. His wife, Annette, was a big support for him along the way. He says when he found himself this clean ’67 Impala convertible for sale along a roadside, it was the one thing that really brought him serenity. No matter what little things may have bothered him-even something as silly as a small argument with his wife-he found that a cruise in his ’67 would take away all worries and stress factors instantly.

The ragtop Impala has been in Andrew’s possession for seven years now and he definitely has no plans to let it go. In fact, many may think he’s fixed it up to the point where it’s fully complete, but he says he has more plans for it and wants to do more upgrades to it every year from now on so that it will be different in some way at each annual car show.

Still, Andrew’s real enjoyment will always come from driving around town and hearing the horns honking from passersby and just seeing people take pictures of his ride at intersections. Andrew sends big thanks to his wife for all her love, support, and patience during the build of this classic Chevy. He also sends thanks to Roberto, Pro Collision, and everyone else who lent a helping hand.

Body/Paint
Pro Collision in Albuquerque took care of the necessary bodywork before laying down a Turkish maroon color over the car’s body. “Shadow” from Dallas, TX, was the talented airbrush muralist who depicted the trio of curvy beauties.

Suspension
Slam Specialties in Albuquerque installed their custom airbag setup, allowing the Impala to slam low or rise up 8-10 inches.