Newsletter
Sign Up today for our FREE Newsletter and get the latest articles and news delivered right to your inbox.
Home » 1983 Cadillac Coupe DeVille – Love Her Madly 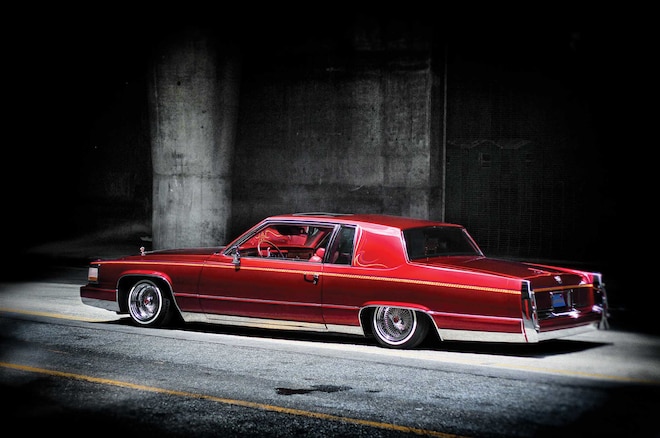 Mike Salcido of Pico Rivera, California, saw his first lowrider at the age of 15. He’s owned several lowriders, but his current 1983 Cadillac Coupe DeVille, “Love Her Madly” shares a special place in his heart because it’s the same year his son Michael Jr. was born. Mike originally purchased his Coupe DeVille in 1993 from a woman in Westwood, California. Of course his first modification to the Caddy was a brand-new set of 100-spoke all-chrome Daytons. Subsequently a year later, his friend John Romero added the hydraulic setup. Mike saw the potential for greatness as the car began to win at every car show it appeared.

As with many projects, this car had a lot of ups and downs and several friends and relatives contributed to its upbringing. After the original paint started to fade, Mike’s friend, Ruben from Ontario, California, stripped the original paint, molded the hood, and blocked the car. The Euro clip was bought from Mike over at Cadillac Connect of Orange County, California. Sunroof Performers out of South Gate, California, installed the sunroof. Mike reached out to his cousin, Roy Magdaleno, a retired Lifestyle Car Club member, and convinced him to paint his Caddy. Unfortunately, the car sat for several years due to financial difficulties and was almost sold in 2003. Fortunately, after Mike met his wife, Anita, things started to turn the corner; she convinced him to keep and finish the car.

Once again, Mike called his cousin Roy and they spent endless hours sanding, prepping, and painting the car out of the front yard of his house. Mike and Roy painted the car four times until they were satisfied with the old-school brandywine color. Dennis Jones from Whittier, California, did the 24-karat gold leafing and striping, and Rick Mungz of Monterrey Park, California, painted the murals.

All the chrome work was done by Jose at Choice Bumper in Santa Fe Springs, California, and the hydraulics were redone by Ray Gonzalez of Santa Fe Springs. Mike Perez of Whittier, California, did an original makeover on the interior and the sound system was installed by Tony Gonzales of Kolors Kustom. Mike’s mother-in-law, Evely Turner, contributed to the project by building the display he uses when he shows the car.

Mike would like to send out a special thanks to Roy Magdaleno, Rick Munoz, and his compadres, Rudy Santos, Hector Ortiz, Evelyn Turner, Robert Amaya, Mike at Cadillac Connect, his wife, children, and “Buddy” for all their support and patience.

Mike Salcido is one of the many Groupe Car Club members who represent their club’s dynasty. He does so with this luxury brandywine rad Cad!