Newsletter
Sign Up today for our FREE Newsletter and get the latest articles and news delivered right to your inbox.
Home » Stream exclusive series, ‘NASCAR ALL IN: Battle For Daytona,’ On the MotorTrend App! 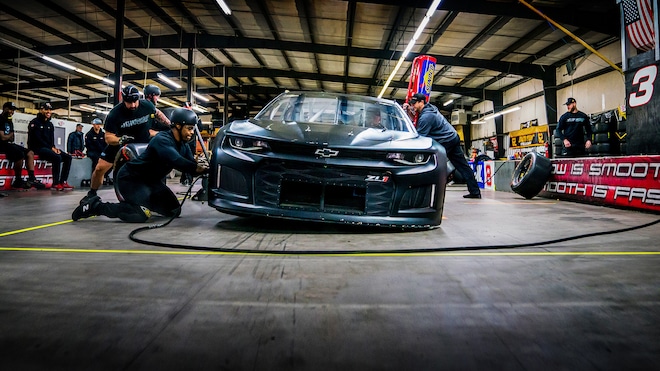 Millions of fans will watch the NASCAR Cup Series season-opening Daytona 500 on February 16, the biggest stock-car race of the year. But how many really know the levels of stress, anticipation, commitment, and preparation that go into competing for the win at NASCAR’s crown jewel? MotorTrend’s new original series, NASCAR ALL IN: Battle For Daytona, launches exclusively on the MotorTrend App on Monday, February 10, and delivers an unprecedented look behind what are usually closed doors and off-limits locations. The five-episode run—a new episode premieres each Monday—focuses on the action taking place inside one of NASCAR’s most famous teams, Richard Childress Racing, and one of its smaller but hungriest contenders, Go Fas Racing.

Each episode is presented through quick-follow documentary-style storytelling, revealing an intimate look at the humans underneath the helmets—and what happens both on the track and, perhaps more importantly, away from it as they prepare to compete at stock car racing’s highest level. Viewers get a rare look at drivers’ preparation and personal experiences that ultimately influence their race-day performance.

Narrated by acclaimed Academy Award-winning actor J.K. Simmons, the limited series digs deep into the worlds of three drivers at very different stages of their careers, and in very different situations.

At Chevrolet team Richard Childress Racing, drivers Austin Dillon—grandson of legendary team patriarch Richard Childress—and touted rookie and two-time Xfiniti Series champion Tyler Reddick develop their relationships with crew chiefs Justin Alexander and Justin Burnett, as they balance racing with their growing young families. The stress is on as they fight to stake their claim to glory in the pantheon of RCR drivers, which, among others, includes notable names Ricky Rudd, Kevin Harvick, and of course “The Intimidator,” the late Dale Earnhardt. With more than 50 years in the sport, six Cup championships, and three Daytona 500 wins—including the 2018 race, won by Dillon—RCR is one of NASCAR’s most celebrated teams. But it has not dominated in recent years, and 2020 sees a host of personnel changes as part of a major effort to get fully back on top.

At Go Fas, driver Corey LaJoie is a Ford fan favorite who also has a baby on the way, and for 2020 he has a new crew chief in Ryan Sparks; intriguingly, Sparks is Dillon’s former race engineer at RCR. With only 18 team members versus the hundreds of men and women employed by each of NASCAR’s biggest teams, everyone contributes to the required Herculean-effort by performing multiple jobs as they battle to break through and become a David vs. Goliath success story. They might be well on their way already: Despite its limited resources, Go Fas finished the 2019 Cup Series campaign with the third-best average finishing position of any team on NASCAR’s superspeedways—of which Daytona International Speedway is the most famous of all.

Episode 1 of NASCAR ALL IN: Battle For Daytona focuses on the seemingly never-ending challenges and preparation ahead of the 500, with each new weekly installment building to the finale’s race day climax. If you haven’t signed up already for the MotorTrend App, subscribe now and start streaming more than 3,500 hours of automotive entertainment for only $2 a month with our special offer! Access the entire MotorTrend library with exclusive MotorTrend original series, hit shows from MotorTrend and Discovery Channel, live events, motorsports including NASCAR All IN: Battle For Daytona and the exclusive documentary Blink of an Eye featuring former NASCAR driver Michael Waltrip, the Ultimate Collection of Top Gear, Roadkill, and more!