Newsletter
Sign Up today for our FREE Newsletter and get the latest articles and news delivered right to your inbox.
Home » Lowrider Garage #31 – Backyard Festival & Car Show is the Lowrider Life 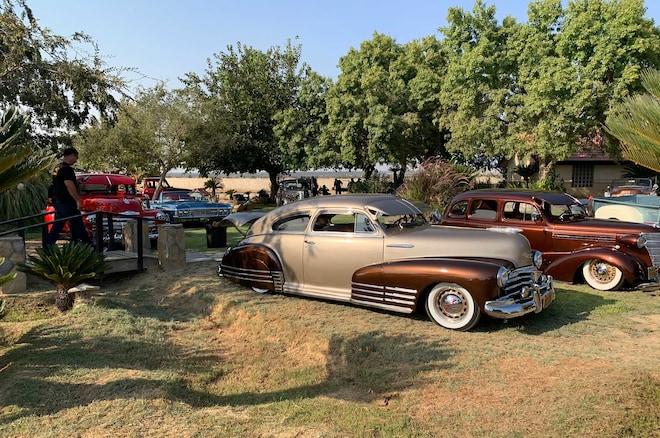 What started as an impromptu meet while hanging out at a car wash way back in 1975, eventually became Bakersfield’s Carnales Unidos and for 45 years now, they are a true testament to the name chosen. Three chapters, one family and a backyard festival make for a great Lowrider Garage video episode as the Merced and Fresno chapters drove down to gather up at the 3-acre backyard park and residence of lowrider legend Harvey Reyes.

At the end of the day these guys are all about commitment and dedication to their cause, but the passion they have for custom and classic cars is shared among every member when they get together. This special event almost resembled a club anniversary celebration, but instead of a formal indoor gathering, Levis and black and gold T- Shirts were worn along with an outdoor car show and barbeque. It must also be said that Ice chests were everywhere and that always make for the best of stories.

Past and present members were in attendance with old memories shared and new memories made throughout the day as well. After the video was filmed, it seemed as if the party and car show would never end and from the looks of this setting along with the music being played, you can only hope it never ends—until someone finally calls the cops. This is the lowrider life for Carnales Unidos and they earned their way to the top the hard way. Today, keeping it together is the easy way, as they’ll tell and show you that Brotherhood is the only way. Check this segment out Friday, October 9 at 5pm PST on Insta TV, Facebook and Lowrider.com.

This past Cinco de Mayo the Merced chapter of Carnales Unidos celebrated their 40th anniversary at Yosemite Lake.

4 decades have gone by and the traditions remain the same as members of Carnales Unidos continue their quest to support their cause and become great role models through the lowrider movement.

In the mid ’70s a group of young men had a vision of uniting the neighborhoods in Bakersfield, California, with cars being their main focus. It was that focus that led to Carnales Unidos C.C. being formed.

Driving north through the Grapevine on I-5 the day before we knew Carnales Unidos would be throwing another great show.

The Carnales Unidos host their annual benefit show at the Bakersfield Fairgrounds.