Newsletter
Sign Up today for our FREE Newsletter and get the latest articles and news delivered right to your inbox.
Home » Lowrider Garage Visits A Legend In The Hydraulic Suspension World 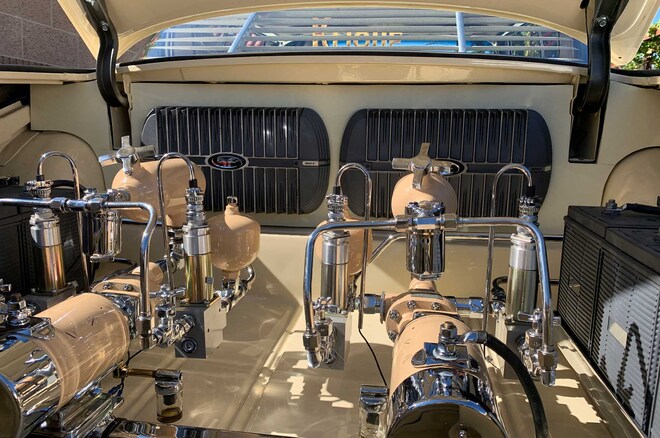 The first thing to enters your mind whenever the word hydraulics are mentioned out loud, is undoubtedly Lowriders! Hydraulics are more than just a traditional means of lowering and raising the suspension of a car on demand, the “heart and soul” of lowriding has to be the wire wheels/520s and hydraulics that clearly define today’s custom lowriders. Without these characteristics, there really would be no such thing as a lowrider.

Hydraulics are the soul because they have been around a lot longer than other methods. The small size of the white wall 520s came about in the early ’70s and the first True Spoke wire wheels rolled down the boulevards in ’76. Hydraulics became part of the lowrider evolution way before then and they have come a long way since the ’60s, when Ron Aguirre installed a system on his 1955 Corvette.

See Some of Big Frank’s Magic on this Feature Car:
’58 Impala ‘Vert

Today, Lowrider hydraulics technology has vastly improved and hydraulic pumps, reservoirs, release valves (dumps) and cylinders continue to be the infrastructure that makes the lowrider world go up and down. Today, these components have been re-invented or remanufactured to handle excessive stress and to perform more reliably. Let’s not forget that there are many shops out there that perform professional installations as well in order to prevent those constant problems of being stuck out on the road at the worst possible times.

Hydraulics that are placed inside the trunk of a lowrider are more than just machinery for altering the suspension, they’ve become works of art and performance which lead to a form of personal status quo. Sometimes the cost of hydraulics are more than a paint job and the fact is we open our trunks more often than we do our hoods to show off what’s inside.

Lowrider Garage had to hop on over to visit legendary Big Franks Hydraulics Shop in Anaheim, Ca, in order to find out why and to get his story on the up and down history of lowrider suspensions. He builds only the best quality setups that come along with his trademark style of Big Frank-sized components, hard lines and fixtures.

His hand made setups are created from the craftmanship experience he gained from other legendary hydraulic gurus in the game. Big Frank was a member of the Imperials and a plumber by trade, and has also owned his fair share of rides along with mastering the art of hydraulics for more than three decades—the Orange County Chapter of the Klique and Los Angeles car clubs can vouch for that, as they brought out their classic rides in full support of Big Franks Lowrider Garage episode. Showtime trunk displays open up this Friday, August 14, at 5pm PST with episode #23!

A One Stop Lowrider Garage

Kicking off the 2016 LOWRIDER tour with a stop in the Valley of the Sun.

What better way to pay tribute to the 1970s than by restoring one of the most popular cars of that era.

Brent restores this 1962 Impala Convertible to its former glory and adds his own personal touch. Check out his modern take on the Impala here.