Newsletter
Sign Up today for our FREE Newsletter and get the latest articles and news delivered right to your inbox.
Home » New Guinness World Record for Largest Classic Car Parade set in Mexico City 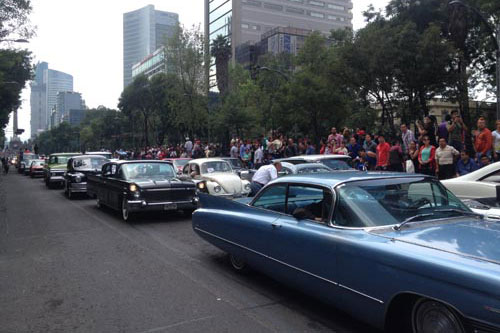 Last weekend, a parade of 1,674 cars made its way down Paseo de la Reformat through the heart of Mexico in front of nearly 250,000 spectators. The parade organized by the History Channel brand, History Latinoamerica set a new Guinness World Record for the largest parade of classic cars shattering the previous record of 948 cars set by the Den Hartogh Ford Museum in Hillegom, Netherlands in 2002.

The event attracted a wide variety of classic cars from Mercury Grand Marquis and Porsche Boxsters to other more exotic vehicles such as Ford Fairlanes and VW Karmann Ghias. To qualify for the parade, each car needed to be at least 30 years old and was required to be presented with original registration.

The event was such a spectacle that it even caught the eye of Miguel Angel Mancera, the mayor of Mexico City who posted several pictures from the event on his personal Twitter account.

It’s always difficult to step out of the shadows when you’re one of eight kids in a household.

Rides Finally Getting To Cruise In This 1994 Cadillac Fleetwood

Building a lowrider is hard enough. Now imagine how much more difficult it would be doing it while raising a family that includes six children.

In typical fashion we kicked off the 2019 show season at the Arizona Super Stadium, but this is no ordinary show. Arizona is breakout show for contenders to showcase all the hard work they’ve managed to squeeze in during the winter.

The latest and greatest from ididit, Autometer, and Holley for your Lowrider needs