Newsletter
Sign Up today for our FREE Newsletter and get the latest articles and news delivered right to your inbox.
Home » Richard Montanez – Raza Report 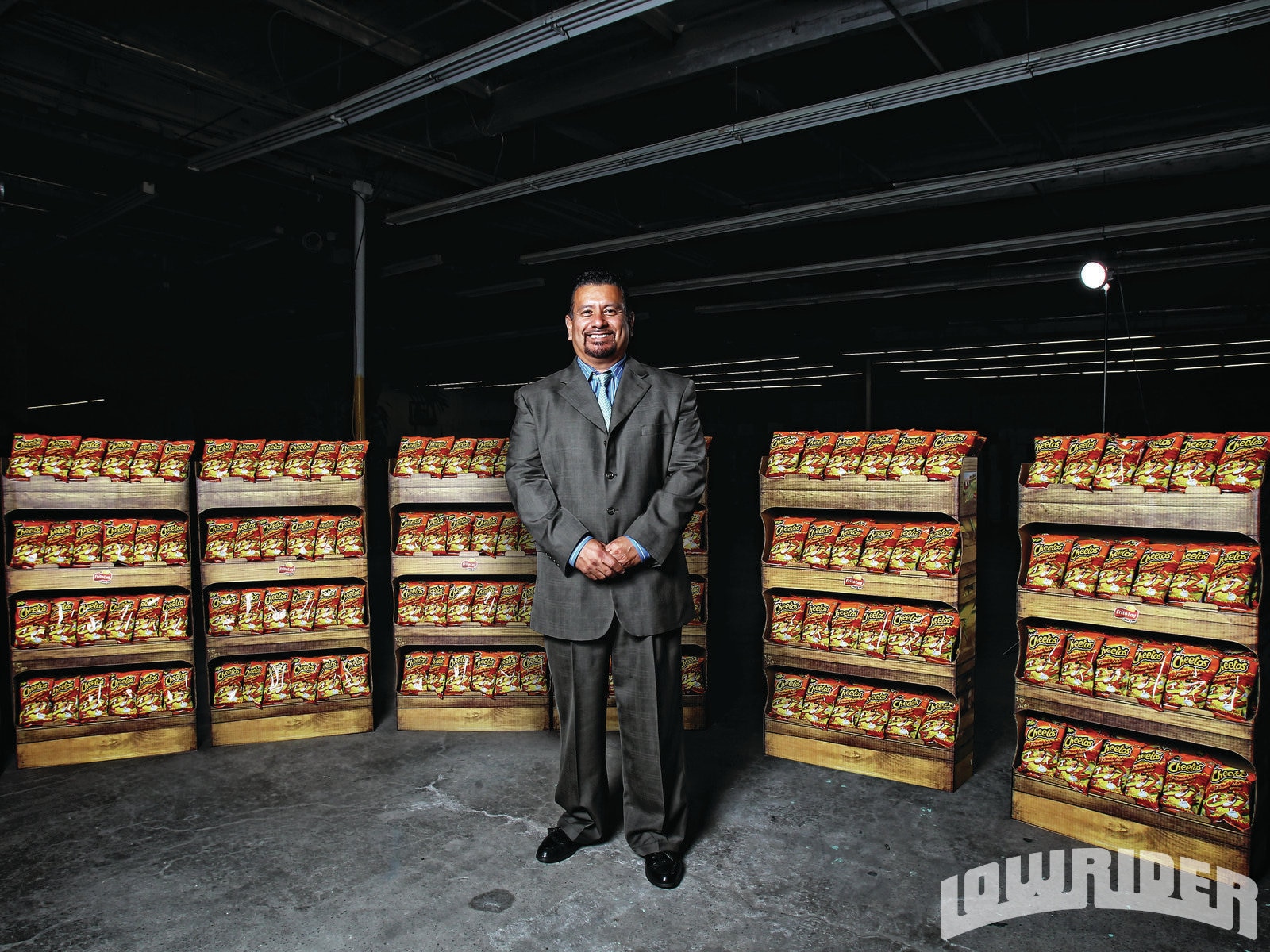 The road to a successful destiny is a lonely road sometimes, one not often filled with many people. If Richard Montanez had his way that road to destiny would be as jam-packed with traffic as a California freeway, filled with everything from lowriders to economy vehicles. “I believe that we all have the capability of being a genius when we are born, but somewhere along the line the world starts to tell you that you’re not, or you can’t be. I don’t think you should ever let someone else dictate how great you can be,” Richard says.

His enthusiasm is contagious, and his empathy for human struggle is genuine. He’s the product of a low-income Latino family and knows all too well what it’s like to work hard and barely make ends meet. Now he is far removed from that struggle, as Richard is the executive of multicultural sales and community activation at PepsiCo North America—a far cry from his initial job as a janitor with Frito-Lay. Lowrider magazine was honored to sit down with this visionary leader to learn how a janitor went on to create one of the most successful snack products of all time, while at the same time providing business opportunities for Latinos.

Richard grew up during the difficult times of the ’60s, a tumultuous time in America where the Civil Rights initiatives were taking center stage in America. Being a minority meant being treated very differently by society. “I remember my mom getting me ready for school and I was crying. I couldn’t speak English and I didn’t want to go to the school I was being bused to,” Richard says. “I got on the bus, which was green, and I remember thinking, ‘Why can’t we get on the yellow bus?’ All through town people knew what that bus meant. Again, it was society placing me in a different category.”

Richard’s mornings were rough, as he couldn’t understand his teachers’ lessons, so he was relieved at the thought of a lunch break. However, lunch proved to be even worse. “I pulled out my food and everyone stared at me: I had a burrito. They didn’t even know what that was at the time, so I’d just put my food away and didn’t eat because I didn’t want to be stared at for being different,” Richard says. “I went home and told my mom to make me a bologna sandwich and a cupcake like the other kids had. Instead she made me two burritos and told me to go make a friend. By the end of the week I was selling burritos for $0.25 a pop!” The experience was invaluable to Richard, as he had learned that what made him different actually made him special and was of value to his life. He remembered this experience during a fateful day in Corporate America that changed his life forever.

While Richard was handling his janitorial duties at Frito-Lay’s Rancho Cucamonga, California, plant, he saw a corporate videotape made by then company President Roger Enrico and then Vice President of Sales Al Carey which said, “We want every worker in this company to act like an owner. Make a difference. You belong to this company, so make it better.” This revolutionary corporate stance inspired Richard who also benefitted from a stroke of luck: a broken machine in the Cheetos assembly line. “Some of them were missing the cheese because the machine had broken, so I took some home. I put some chili powder on it, and it tasted good! So I mixed up some more chilies and began trying to create my own seasoning. I let my coworkers try a few and they loved them. Then it hit me, I had an idea!” Richard took the company president up on his offer from the videotape. “I called up President Roger Enrico, not knowing I wasn’t supposed to do that. His assistant picked up the phone and asked my name and where I worked. I told her I was Richard Montanez, and I worked as a janitor in the Rancho Cucamonga plant. She was a visionary for even putting me through to Roger. He got on the line and said, ‘Hi Richard, I hear you’ve got an idea?’ He told me he would be down at the plant in two weeks and wanted to hear my idea.”

Richard’s excitement was met with opposition among his coworkers at the plant. “I was greeted with, ‘Who do you think you are calling the president like that? Now we have to make the plant presentable.’” Richard was stunned, but instead focused on the fact that he had two weeks to organize a presentation for a new product launch, knowing nothing about how to do it! “I designed my own graphics, made about 100 bags, and I went to the library and checked out a book on how to build a marketing and sales strategy.” The time had come and the company president and top executives showed up at the plant for his presentation. The president was so impressed with Richard’s packaging that he thought they had already designed the product. “I was nervous but doing well until an executive in the meeting threw me for a curve when he asked me, ‘What size market share do you think we should get with this product?’ It hit me that I had no idea what he was talking about, or what I was doing. I was shaking, and I damn near wanted to pass out. I thought hard and envisioned the sales racks that you see at the bodegas or the grocery store and realized what those shelves looked like, and I opened my arms to about as wide as the rack displays were and I said, ‘This much market share!’ I didn’t even know how ridiculous that looked. They could have laughed in my face right then and there, but the CEO stood up and put his arms out the same way and said, ‘Gentlemen, do you realize we have a chance to go out and get this much market share?’ Then Al Carey (who is currently the CEO of Frito-Lay) stood and asked his sales team with hand open, ‘Can we get this market share?’” Needless to say, Richard’s idea worked and that’s how Cheetos Flamin’ Hot were born—with a little Latino ingenuity.

Cheetos Flamin’ Hot is now the biggest selling, single-serve SKU in the company. The success of the product influenced and created the first Frito-Lay Hispanic marketing team. Rather than rest on this accomplishment, Richard instead fills his days with ways that serve to nurture our country’s future leaders. He’s worked with PepsiCo to develop college scholarships directly catered to minorities and the less fortunate. He has also launched the Continuous Improvement Initiative, and helped influence Hispanic products and marketing promotions for KFC and Taco Bell. These experiences are not lost on Richard who knows that uplifting others has been the key to his success. “I’ve worked on Capitol Hill, I’ve worked with [former California] Governor Schwarzenegger, and I’ve worked on efficiency teams. The fact that I’m lucky enough to be surrounded by great people, like my mentors Roger Enrico and Al Carey, and that I get to meet and help so many current and future leaders, constantly inspires me,” Richard says. “I’ve never had a bad year with the company because of my passion and the fact that I’ve worked with so many great people. Thirty-four years in and I’m still excited about what I’m doing.”

Richard has been recognized by Hispanic lifestyle magazine as one of the most influential Hispanics in Corporate America, and he’s been featured in Newsweek and Fortune 500 magazine. An even greater feat, Richard and his wife have been married for more than 30 years, and he is the father to three sons and has four grandchildren. “I want my kids and the kids I speak to across the country to understand the importance of education and the value of having self-confidence,” Richard says. “Once I got a hold of confidence and realized who I was, it gave me a different sense of power and accomplishment. When you feel that way you can light up the room, not because you own material things,” Richard says from his warehouse, which is used to store the food and toys he gives to needy children. “Get your education and have confidence. A lot of times, growing up in the ’hood, there isn’t much to be confident about. Chances are you’ve been broke, you’ve been hungry, and you feel like you don’t have anything. Well, I’ve been there too, but instead of that stopping me it made me succeed,” Richard says. “I may not have a degree, but I read a book a week. People tell me that with the knowledge I have, I should have a PhD. I tell them, ‘I’ve had a PhD since I was a kid: I was poor, hungry, and determined!’”

Richard has used his life experience to influence not only the gente but the world at large. That same nervous little boy who was embarrassed of his lunch is a living testament that you can make it in this world if you accept who you are, carry yourself unselfishly and confidently, and learn as much as you can from others. “I believe that God made us all unique and that you have a genetic code that no one else has. In all the ages of time there has never been or will ever be anyone like you. We are all gifted, and when you find your purpose, you find your gift. I tell my children to never let any man, woman, or society tell you who you are. You know who you are, and you’re destined for greatness.” Spoken like a true leader.

Kits for kidz ™and Feed The Children are just a few of the charitable programs that PepsiCo Sales Executive Richard Montanez demonstrates his passion to help the needy. He says “True performance with purpose begins by serving in all communities across our country, especially during rough economic times.”