Newsletter
Sign Up today for our FREE Newsletter and get the latest articles and news delivered right to your inbox.
Home » Mister Majestic of Arizona – Richard Gonzales 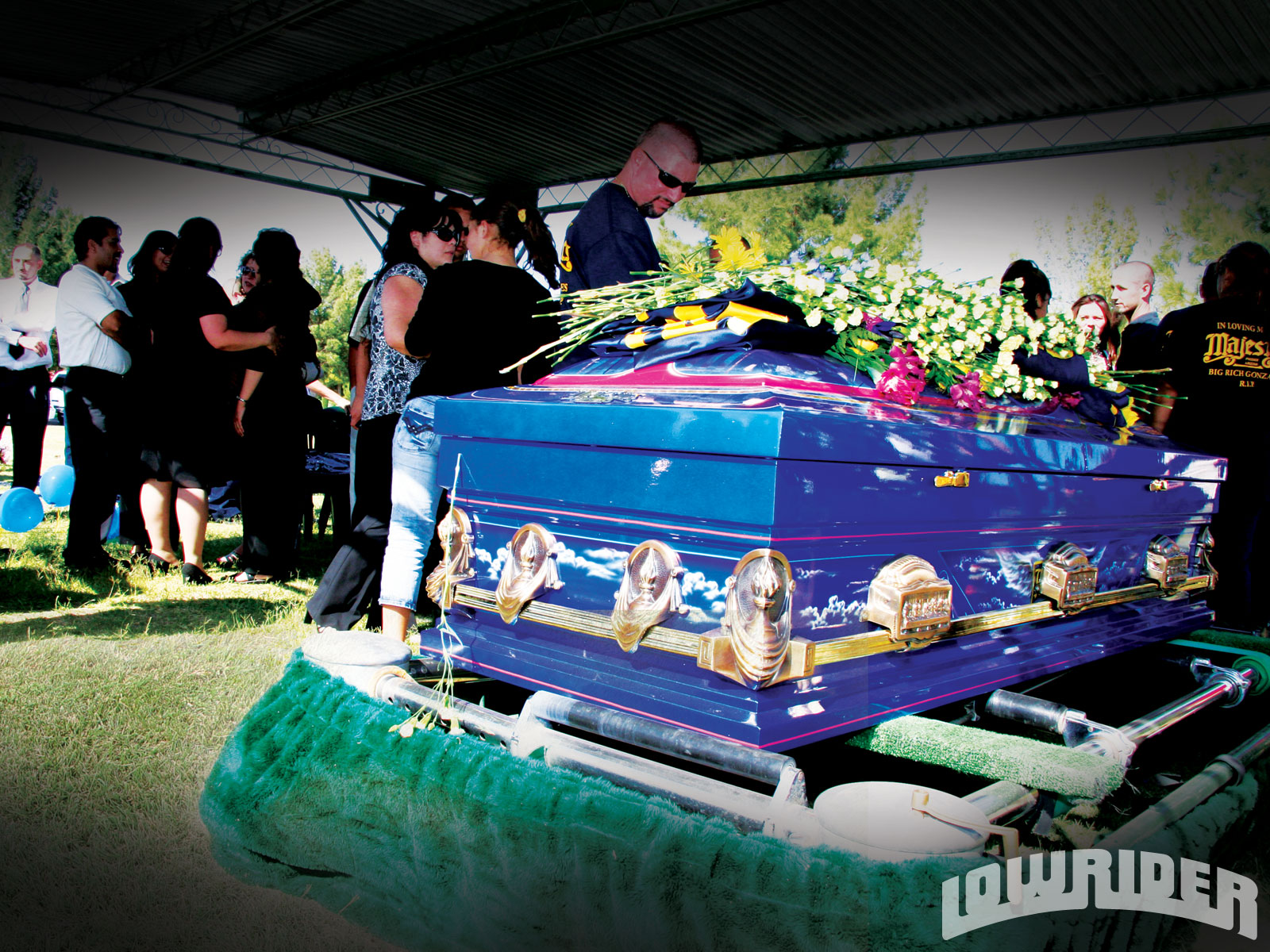 This year’s Lowrider Hall of Fame Memorial Honor is presented to Richard Gonzales of the Majestic’s Car Club, Phoenix Arizona Chapter. “Big Rich,” as his friends and fellow Lowriders knew him, held the office of Car Club President for over thirty years. His unselfish dedication to this club was widely inspirational to the Lowrider community, making his lifetime commemoration special to everyone who knew him. A quiet giant in Lowriding, his actions spoke for him. With his untimely passing, he left behind his adult children, Richard Jr., Ruben, Rosanna, Randy, and Rachel from his first marriage. He also leaves behind his beautiful wife and companion of 25 years, Pam Gonzales, who, along with her children Robert, Frank, Pete, and Lisa, remained by his side throughout his years with the Majestic’s. Pam was patient, as most club Presidents’ wives are. She understood that to be married to Richard, she had to understand that a piece of him would always be attached to the Lowrider lifestyle that captured his heart.

With close to forty chapters worldwide, The Majestic’s Car Club rank as one of Lowriding’s largest and most respected organizations ever to fly a plaque. Richard’s life journey was shared with a core group of family, friends, and club members that to this day, pay the upmost respect and homage to the Arizona Lowrider. His name was synonymous with the Majestic’s, and rightfully so; as he was the man behind the origins of the Phoenix Chapter of the club.

Each Majestic’s chapter worldwide has a story to tell, but Richards’s story starts in the same manner as most of his counterparts. Born in West Phoenix on April 1st, 1957 and raised by his loving Parents Mary Helen and John Gonzales, Richard and his brother John, or “Pudgy” as his close friends knew him, were into cars at an early age. At first, Richard’s passion was the need for speed and hot rods. As sure as the caterpillar changes into a beautiful butterfly, he changed his automotive direction and built his first Lowrider, a blue Ford Pinto. Obviously, he was very confident having lowered a Pinto to cruise down Central Ave. But Richard did as we all do in life; he made the best of everything, Chicano Style! When Richard and the club’s founding members, Art, David, Victor, Dickie, and the Machaca Brothers, among others held their first meeting back in 1976 on 33rd Avenue and Marshall, they were thinking more locally regarding a car club name, unaware of the Majestic’s in LA and Compton. After hours of debate, one of the members mentioned that he had just seen a new movie with Charles Bronson called “Mr. Majestic,” and he liked the way it sounded. He brought it up as a suggestion, Big Rich liked what he heard, and as everyone knew, no one argued with Big Rich. That was that, and thus began the branding of Majestic’s Car Club…or so they thought.

Being a new local car club, they attended the first ever Lowrider Magazine Firebird Lake Car Show in 1977. The show in the desert was the first of a long running tradition, which over the years, moved to the beautiful and air-conditioned Phoenix Civic Plaza. The event is now orchestrated by Johnny Lozoya of Super Events. Little did the local Majestic’s chapter know, but a few out of state car clubs braved the desert sun to partake in the Lowrider Show as well. Car Club plaques from Imperials, Lifestyle, Stylistics, Klique, and Majestics were displaying the best of what Califas had to offer in the form of candies, flakes, and pearls. When Big Rich saw the California plaques, he thought, ‘here we go, a showdown in the desert.’ But he and his fellow members were surprised and amazed when the California Mother Chapter approached them and asked them to be the 7th Chapter of their growing organization. Boyd, the California President, cleared the way for the Phoenix, Arizona Chapter. Big Rich agreed, and transformed the local version into an extension of this growing club. In today’s climate, this visionary move would be the equivalent of buying early stock in Microsoft. The christening became complete at the LA Super Show, as the twelve-man Phoenix Chapter received their inaugural plaques and club colors before meeting with other Chapters for a Majestic Party at the event!

Since then, many outstanding members have honored the Arizona Majestic’s plaque flyers that have since passed on. Marty Smith always made his presence known with his ’67 Impala, much in the same way good friend Andy Valles did before passing on a year after Big Rich. The Majestic’s are well known for their rich tradition of building true Lowriders with small wheels and juice. They have always maintained their roots of Lowriding in the traditional sense. Richard always made sure he was able to fly his plaque proudly; a long way from his early days in that Lowrider Pinto. Richard managed to build a variety of beautiful rides throughout his amazing career, including a ’63 Impala, a fully custom ’73 Convertible, and most recently, a ’94 Cadillac. These rides all pulled in their fair share of awards and trophies.

Richard’s impact was not only felt by his car club, but in the community as well. He strived to stay connected in many ways. As a Lowrider activist, he knew it was critical for his club to give back to the community in order to be more widely accepted, and he utilized many avenues to accomplish this. Richard donated his time and energy with Chicanos Por La Casa, The Salvation Army, and many other charitable organizations which genuinely appreciated his generosity. He also instilled the value of community service into his club, something that still binds the Majestic’s today. They still participate in an Annual Toy Drive and many other community outreach projects for families in Phoenix, Avondale, Casa Grande, and Glendale, Arizona. Big Rich also took good care of his own family while guiding the car club. Whenever the club made a road trip to far away car shows, there were always detours like Sea World in San Diego, The Las Vegas Strip, and other Amusement Parks and getaways for his kids, grandkids, and fellow car club family members to enjoy. The Arizona Majestic’s have always maintained a family atmosphere; it is at the very core of their club values. This made each member an extension of their own families, and provided an unsurpassed unity for this groundbreaking club to thrive upon.

Unfortunately, Richard Gonzales passed on April 28th, 2007. The direct impact he made to his community is immeasurable, and his pursuit of happiness was felt by the many who knew him. His wife, Pam, described him as ‘a big bear with a big heart.’ He was a great protector and leader, and his presence gave off the aura of a fellow Lowrider Brother who would fight the good fight in helping others succeed. This garnered him an incredible amount of respect, both inside and outside The Majestic’s. He understood that this is the mark of being a great Lowrider Car Club President. You really have to share the talents that God has graced you with, and become a blessing, not a burden, to your fellow man. Mr. Majestic of AZ will not be forgotten. His memories are as solid as the plaque that flew on the cars he drove to each of the car shows The Majestic’s attended. Big Rich and his big heart have continued to flourish even after his passing, but now it is his true friends that want to give back in return. Take for instance the work of Todd Land, who is now refinishing one of Richard’s rides so that the plaque he stood for can continue to fly proudly on the car that helped put the Majestic’s in Phoenix. Ride in Peace, Brother.