Newsletter
Sign Up today for our FREE Newsletter and get the latest articles and news delivered right to your inbox.
Home » Y 2 James – Custom Car Models 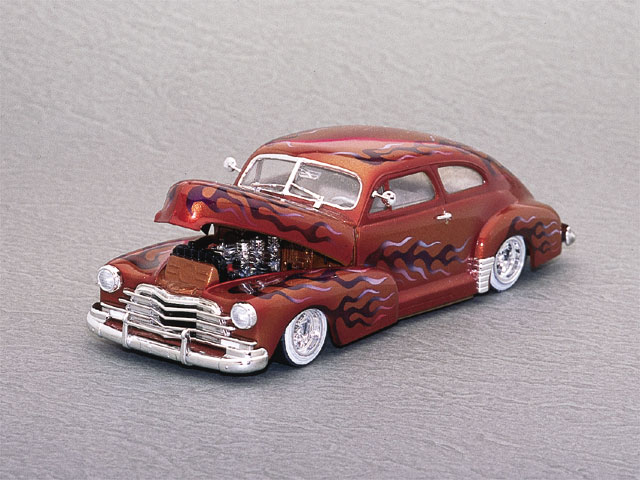 A few years ago, James Bonsell from Huntington Park, California, picked up a ’50 Chevy pickup and started to build one of his best models yet. Chopping off the roof and shorting it as well, James added a custom front end with ’37 Ford headlights. James also molded in taillights, suicided the doors, and added a flip-open hood, Gaylord tonneau cover, operating tailgate, and front and rear roll pans. Once James was finished, he didn’t know what to do with the model. So he put it away in a shoebox for about three years, letting it collect dust and cobwebs in a closet before he recently took it out to do some reworking.

The newly reinspired James called up his friend Gary Seeds, who laid out the custom lacquer paint job. Once James dropped the model off, Gary grabbed his handy air gun and began to shoot gold as the car’s main color. Once the gold had dried, Gary added some blue and purple around the fenders and finished it up with some tangerine paint that tied in all of the colors and made it look like one sweet work of art. It was then time to do some custom upholstery on the truck so James called up his friend Frank Fernandez from Cudahy, California, to come down and help him with the interior.

James and Frank started off on the interior by making custom seats out of styrene plastic, as well as hand fabricating a custom dash and adding a steering wheel that James found in an old spare parts box. With all of the parts in place, James went ahead and applied light blue fuzzy fur highlighted with chrome tape. James then decided to work on truck’s bed, where he installed a speaker box with two woofers, three tweeters and two amps, all meeting up with the CD player up in the front cab. With all of the pieces in place, all that was needed was the engine and undercarriage. The only thing that was missing at this point was a set of rims and for that he used a set given to him years earlier by Gary Seeds. Since James finished the model before the official millennium, he decided to call it “Y2 James.”

When the new Volkswagen Bug came out, James had the bright idea that he should turn a Bug into a tow truck, thus starting his latest project, “Tow Jam.” James thought of this project long and hard, once laying out the plans he got to work on the hybrid. The first thing that James did was to cut off the rear portion of the Bug and cap it off to give it a “truck” look. Now this is where the tow truck portion came in. James had a tow truck kit in his closet and didn’t know what to do with it until the new VW Bug came out. James skillfully attached the rear portion of the tow truck to the VW using a custom frame.

He then went on to the paint the creation in candy purple with a slight touch of chrome illusion paint, and then took it to David Anthony Garcia from the Drag-N-Shop in Santa Fe Springs, California, so that he add some fine lines throughout the tow truck. James was on the home stretch, all that he needed to do was to put some pieces back together and place them on the Bug truck, and add some detailed pieces to make it unique. James noted that all that was missing was the “call log” book and half-eaten doughnut in the passenger seat to complete the tow truck.

James’ latest projects were now done and ready to hit the show circuit for all to see. Let’s take a quick sneak peek at some of his other recent creations. James has also built a very fine rust orange ’47 Chevy sedan perfectly christened “Flaming ’47,” and his very favorite car hauler, an olive green Chevy extra cab with an operating flat bed capable of carrying a single car piggyback. Two other model cars, a light cream ’51 Chevy and copper colored ’51, were finished just for our photo shoot.

You’ve seen examples of James’ work in previous editions of LRB, but we couldn’t resist showing you some more of his highly detailed models. Actually, we here at LRB can’t wait to see what James will bring out next, and when he builds it, you can bet that we’ll feature it.