Newsletter
Sign Up today for our FREE Newsletter and get the latest articles and news delivered right to your inbox.
Home » Matador Art Exhibition 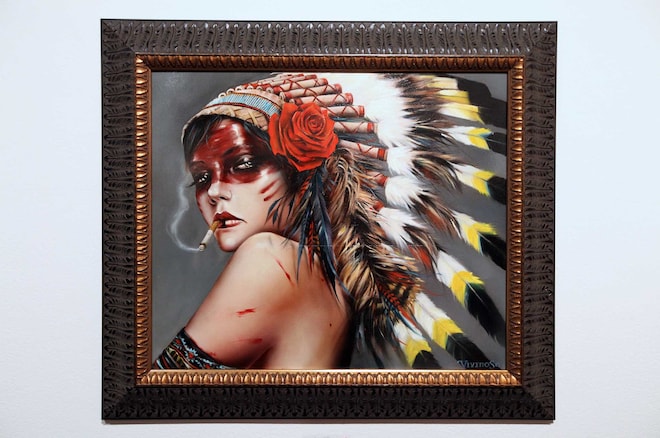 Almost four years after having Brian M. Viveros’ artwork grace the cover of Lowrider Arte, we catch up with him at his solo exhibition in Culver City, California. Thinkspace Gallery presented the Matador exhibition, which is the first comprehensive presentation of all-new work by Viveros in years. Matador featured new paintings, prints, charcoal work, and a 216-page full color book. As we pulled up to Thinkspace, we could see the line of people of people waiting to have Brian autograph their book/poster/print and to get a photo with him. We were fortunate enough to cut the line and go up to Brian and ask him a few questions.

Lowrider Arte: So what have you been up to since the Arte feature?

Brian M. Viveros: I went underground and continued painting. I’ve been working on this gallery for the last eight months and I’m very exhausted, but I’m happy to finally get some time and have a drink.

Lowrider Arte: Is this the usual crowd you attract?

Brian M. Viveros: No, this is the largest crowd that I’ve ever had.

Lowrider Arte: How many new pieces did you produce for this exhibition?

Brian M. Viveros: This is the largest body of work that I’ve done and I completely sold out. This is an epic night for me; so if you are here (talking about his fans), thank you for making this an unforgettable night!

Lowrider Arte: How long have you been a fan of Brian’s work?

Flavia: I’ve been following his work since 2008.

Lowrider Arte: How’d you come across his work?

Flavia: I go to a lot of art shows and read a lot of art magazine. His work just happened to pop up and it was just one of those things that clicks, and when it just clicks then you know you love it.

Lowrider Arte: What is it about Brian’s work that made you a fan?

Flavia: How he captures women as been strong, beautiful, and fierce. It’s easy for a woman to see other women as empowered beings. So for a man to do it and to do it in a strong but caring way is something that I’m taken by.

To see more of his work or to purchase his prints or book, then log on to brianmviveros.com.