Newsletter
Sign Up today for our FREE Newsletter and get the latest articles and news delivered right to your inbox.
Home » Behind the Scenes With Eddie Zamarron – A Man Of Many Hats 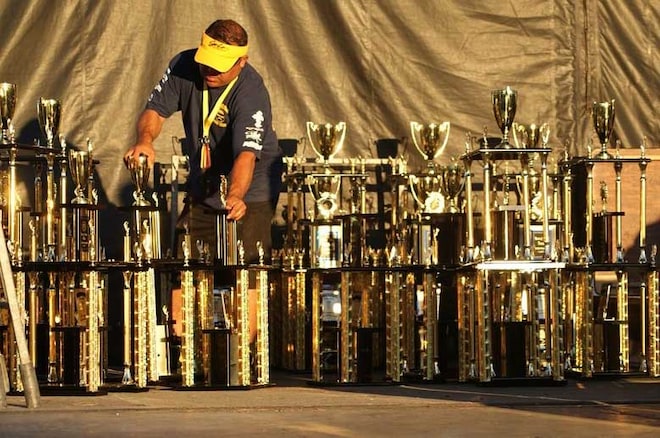 To get an idea of what Eddie Zamarron is all about, we’ll take you to the final moments leading up to the exhibitor move-in at the 2019 Lowrider Magazine Super Show. “Are you sure; we can’t see it working” echoed inside the walls of the Las Vegas Convention Center. With the Center’s first show experience, it was understandable in questioning the next process. I told the doubters, “no worries, with the return of the Motorsport Showcase staff, the guy with the yellow visor is confident in their game plan”.

That weekend, the MSS staff, with that visor wearing Eddie “Texas Ed” Zamarron at the helm, made its mark as the most successful move-in operation in LRM history. For Texas Ed, this was not an overnight success. After freelancing events in 1992, then LRM publisher Alberto Lopez assigned Eddie as the Texas editorial rep. In 1993, Eddie began working double duty by helping Larry Gonzales in setting up the Texas and L.A. shows, and at show time he would transition into photographer mode. “Back then Larry saw something in me, and recommended I come on board in assisting him in the show logistics and floor plans” recalls Eddie. -Side note, Larry coined the moniker Texas Ed. In 2000, Eddie was appointed move-in coordinator for the 18 stop U.S. tour and continues in that position to this day, under the Motorsport Showcase brand.

Along with editorial credits, Texas Ed has had multiple roles within Lowrider Magazine/Lowrider events, including multi-tasking at the shows as a judge of both cars and hydraulic competitions. Even last year, in Miami, the show was larger than expected and without missing a beat, he came out of his judge retirement with clipboard in hand and assisted our judges. “Such a great experience in judging amazing vehicles from all over the country, and most proud in launching the Traditional Sweepstakes class during my involvement with the rules committee.”

In 2005, along with Richard Ochoa, they established the Official Lowrider Magazine Hall of Fame. “It was a great honor in inducting those lowrider legends, including a personal full circle when we inducted my mentor, Larry Gonzales in its inaugural class”.

Eddie thanks his wife, Margaret, and family for their patience and support, especially when missing family events during the numerous tour dates. With an extended appreciation to each exhibitor that has supported our shows “we will never get it perfect, but our team strives to be fair and accommodate as best we can. Our success can only continue with your support!”