Newsletter
Sign Up today for our FREE Newsletter and get the latest articles and news delivered right to your inbox.
Home » Home Garage Turned Lowrider Magazine Collection Hall 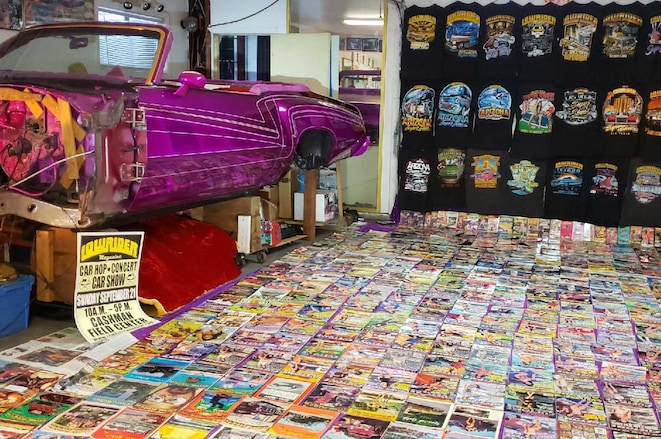 From January 1977 all the way to March 2020, there have been 470 monthly Lowrider Magazine issues since it all began and every one of those copies is archived in Martin Hernandez’s garage. As you can see, Martin is very proud to be part of the Lowrider scene and history as he has the entire magazine collection displayed in every square foot of his garage. Yes, a garage turned into a Lowrider library with a couple of custom Lowriders thrown into the mix.

Located in North Hollywood, Ca, Martin became a huge fan of Lowriding back in the ’80s. His passion for the culture continues to grow every year as he travels out to support the Lowrider Car Show Tour stops. There’s a collection of car show T-shirts that represent a map of all the city and state locations he has attended over the years and as you can see by the pics in the image gallery, there are also trophy and plaque awards he’s received for his three show cars – 2 chop top Monte Carlos and a custom Coup Deville Cadillac.

Some can proudly say they have a lowrider in their garage, but it can be said that Martin has a few Lowriders inside of his very own custom library! Thanks Martin, keep the history alive and we all thank you for your die-hard support!