Newsletter
Sign Up today for our FREE Newsletter and get the latest articles and news delivered right to your inbox.
Home » Payless Tire Shop is a Vegas Hot Spot 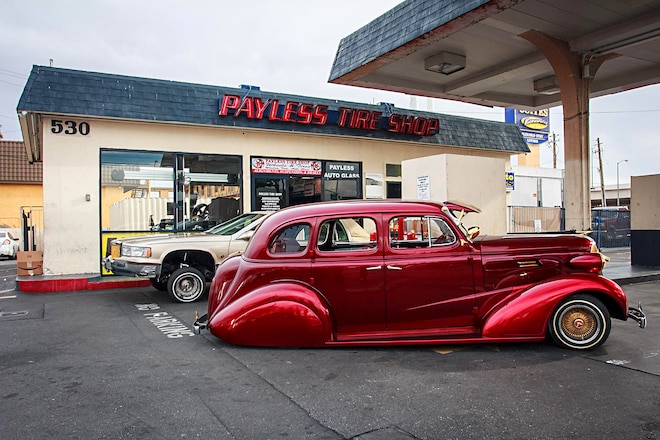 In a little inconspicuous corner of the infamous Las Vegas Boulevard sits the city’s go-to shop for tires, wheels, and, yes, … tacos. If you’ve had the privilege of attending the annual LOWRIDER Super Show, then chances are you’ve passed by it at one point or another.

Payless Tire Shop offers everything from window tinting, mechanical work, and a large selection of wheels and tires that are all in stock, and it’s located in the same parking lot as a taco stand to dream for.

“We work on everything from lowriders to Lambos to Bentleys,” owner Ivan Valenzuela, says. He further mentions, “We’ve had some of lowrider’s top car clubs stop by.” Clubs like Highclass, Majestics, Groupe, Nokturnal, and Desirable Ones are often seen getting their cars serviced here, and as if that weren’t enough, he’s had celebrities such as legendary boxer Floyd Mayweather and Gerardo Ortiz stop by. In all, they’re a one-stop shop that can feed more than just your automotive desires.

For most getting your car serviced is not necessarily the best way to spend an afternoon. Fortunately for you, Payless Tire Shop is adjacent to a world-renowned taco stand. Voted “Best tacos in the world” and featured in several media outlets, like Telemundo, you know your taco cravings will be satisfied.

When asked about their specialties, owner Hector Nunez grinned and responded with, “We specialize in Al Pastor.” From burritos to tortas to the savory “sincronizadas,” this local hot spot offers all the traditional late-night cuisine we crave. So when you find yourself in Sin City, just look for the long line of car club T-shirts … and tell them LOWRIDER sent you.