Newsletter
Sign Up today for our FREE Newsletter and get the latest articles and news delivered right to your inbox.
Home » The Acquafresca Brothers 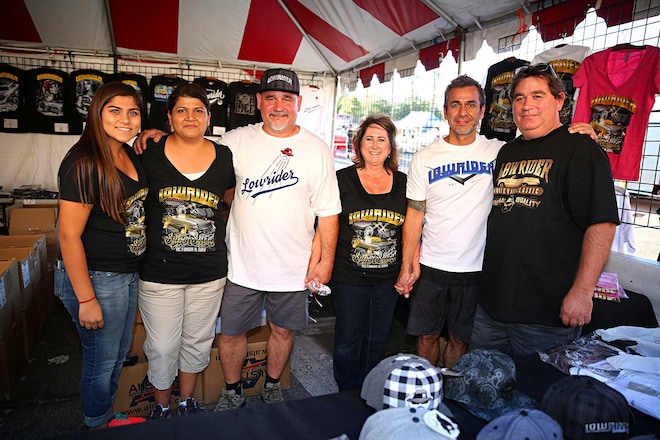 Growing up in a third-generation sewing factory, brothers Joe and Brian are no strangers to the apparel business. As the proprietors behind Del Rio Marketing, the name may not sound familiar but they are the dynamic duo behind Lowrider Brand clothing.

A far departure from making denim jeans for a living, their family history is one that reads like a “Who’s Who” of the apparel game. It all started with their grandfather, who was a sewing machine mechanic and met the love of his life-who at the time was a laborer in a Chicago sewing factory. That was back in the ’20s and since then their family has stitched together a path that would take them on a long and colorful journey. Their uncle worked for the company that created Angel Flight jeans (think John Travolta in Stayin’ Alive) and their father worked for the company that made OP shorts back in the ’80s. Inherently, Joe followed in his grandfather’s footsteps and was once a sewing machine mechanic while his brother, Brian, served as engineer for a family owned business in the Central San Joaquin Valley.

Throughout their journey, they spent many years manufacturing jeans for Gap, Hurley, Ben Davis, Wrangler, Lee, Guess, Calvin Klein, and Quicksilver, just to name a few but as NAFTA forced sewing jobs out of the U.S. in the mid to late ’90s, they had to find an alternate plan to make their own apparel to fill the factory.

During their search, they were looking to collaborate with a brand that had strong cultural roots and identity. They wanted to serve a market—and a brand—with a loyal following and they wanted to represent a brand that stood for culture and integrity. That’s when they stumbled upon Lowrider magazine. Their infamous “Lowrider” arch and “Goloman” logo were the primary reasons for their interest, but there was also personal attachment and familiarity with the brand.

“Being raised in the San Joaquin Valley, we had many Mexican-American friends and we even had family members involved in the cruising scene on Mooney Boulevard in Visalia,” the brothers said. But the love and admiration was more than just an observation, it was a part of their family. In high school, their sister, Cara, dropped a 1984 Coupe De Ville, and looking back they remember just how big the boat was.

From there, it was Joe’s idea to approach Lowrider about developing a clothing line, and that led to their first meeting with LRM. This was back in 2001, and after striking a deal, they hit the market with their first introduction: a pair of carpenter jeans they called, “The Cruiser Jean” and later renamed “The Impala Pant.” Along with it, they introduced three T-shirts and a baseball cap and they were all instant hits.

The following year, they developed “The Veterano” flannel shirts and they continue to be one of the staple items within their Lowrider line. Simultaneously, Lowrider Sunglasses was developed by a sister company and were distributed nationwide by 7-Eleven Corporation for several years. By 2007 Lowrider Clothing grew to $6.5 million in annual sales, with product being sold at Sears, Mervyns, and 1,000 stores all throughout the globe.

At its peak Del Rio Marketing distributed Lowrider Brand clothing to 17 countries and sponsored Lowrider events in Auckland, New Zealand, and the Pearl Harbor Naval base in Hawaii. But ask them about their growth and they’ll be quick to mention two things: plenty of hard work and an employee named Angie Velasquez. “We couldn’t have done it without her,” the pair said. “She’s been with us since she was 18 years old and now she’s 40, so do the math.” Better known as their righthand woman, Angie is the glue that holds the place together and she does so with or without their presence. In fact, if you’ve ever called the shop, there’s a good chance you’ve spoken with her.

At the height of the 2008 economic downturn, it affected their business, much like everyone else, but they were strong enough to remain standing. With a little downsizing, they managed to weather the storm and they’re proud to still offer core Lowrider products to our loyal LRM customers and friends. “Their journey, and the people we have met is truly what makes our business satisfying,” the brothers said. They travel the Lowrider Tour like clockwork, and their hands-on approach to dealing with customers is unparalleled and a testament to the pride they take in their brand.

So if you happen to see Joe, Brian, or their children at an upcoming Lowrider event, be sure to tell them you read their article and let them know you want a deal. No … seriously, let them know and see what they can come up with for you because at the end of the day they’re all about the brand as well as the people who support it.

When asked about their fondest memory of working with the Lowrider Brand they’ll be the first to tell you that the people are what make this lifestyle so spectacular. Being welcomed into the community for the last 15 years has left them speechless and they are truly honored to be accepted like family. Now, if you’re curious about their last name, it’s Acquafresca (Italian for “fresh water”), but Joe and Brain will be quick to tell you to just change the letters around to read “Aguafria” and we are hermanos (y hermanas).