Newsletter
Sign Up today for our FREE Newsletter and get the latest articles and news delivered right to your inbox.
Home » Gilberto Espinoza & Espinoza’s Leather – The Family Vest 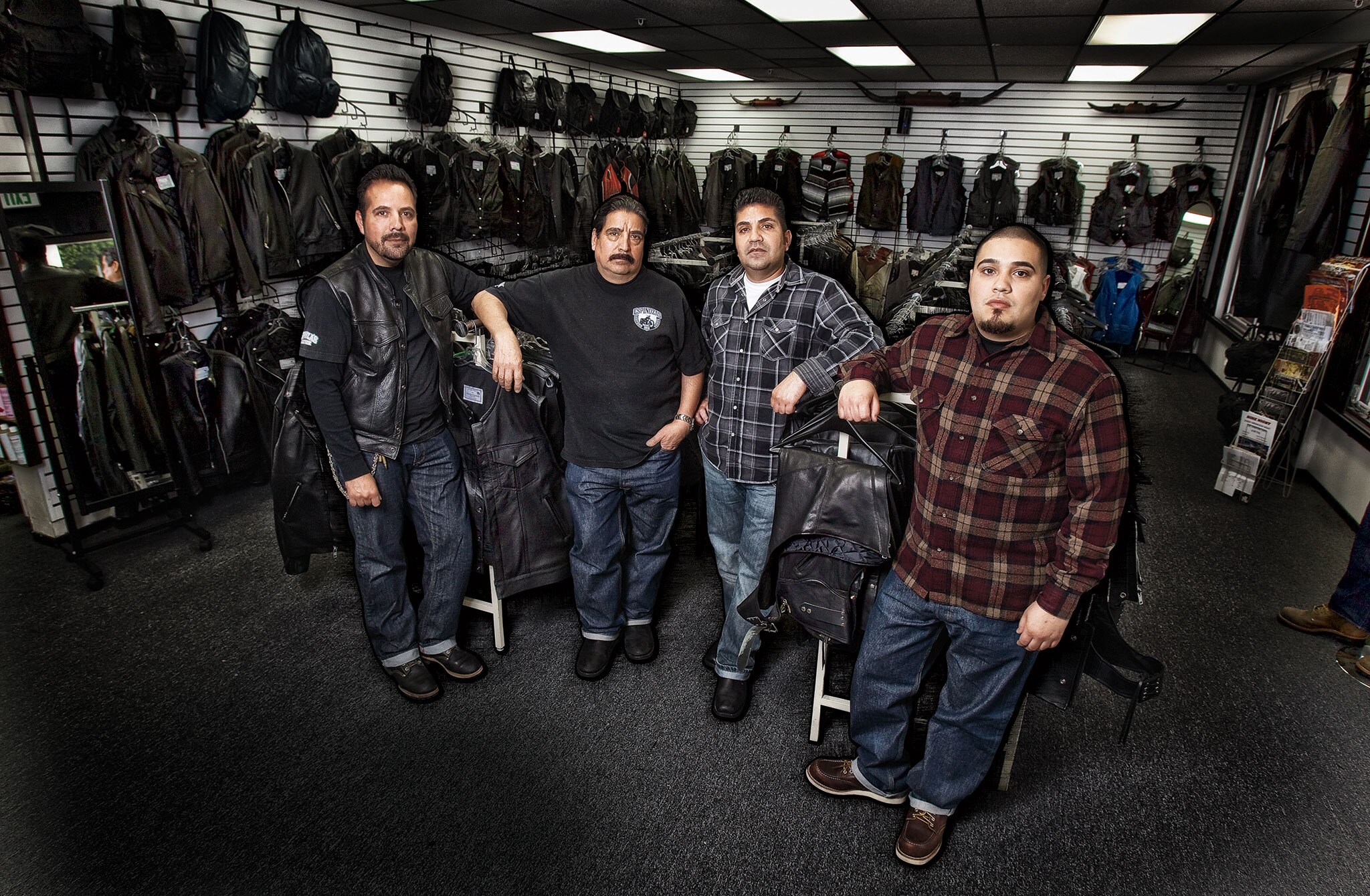 The vest is sacred throughout the biker world and without saying a word it communicates who we are, where we come from and whom we ride with whether in a group or solo. When Gilberto Espinoza started making leather bracelets and belts after a farmer strike in 1971, he had no idea that it would eventually lead him, and later his three sons, down a path to becoming one of the industry’s most respected makers of biker vests and leathers. But the story of this family-run business goes far beyond leather hides and sewn-on patches. Their story is of one man making sacrifices for his family, only to have his family do the same in return to take care of him. This is the story of Gilberto Espinosa, a quiet and humble man, as told by his three sons, Joe, Gilbert Jr. and Eric.

How did you start making leather goods?

Joe: My dad left his home when he was only 8 years old. He made his way from his childhood home near central Mexico to Tijuana. After some difficult years he made his way into America where he started working as a meat cutter and that’s when he met my mom. My mother’s father was dabbling in belts and leather goods and my dad saw an opportunity to start his own business. He started out making berets, key chains and bracelets with individual’s name stamped in them. We have pictures of a huge mountain of bracelets where people would come, pick one and we’d stamp in their name. The cost was one dollar and the stamp was free. That’s how my dad’s business first started in ’71.

Gilberto: I started my business back in 1971. I was a meat cutter. One time the farmers went on strike and there was no more meat to cut. My dad told me why don’t you go to the store get some leather, make some belts and wallets and sell them at the swap meet. While there I met a lot of bikers who would ask me to do little repairs and custom stuff like wallets. That’s how I first started working with bikers.

Joe: We started this business in the garage with a couple of wooden tables and a machine we still use today. My dad would be stamping out leather all day and my brother and I would paint the edges. My brother and I sacrificed every summer traveling to all the state fairs. There was one summer we had to work 10 a.m. to 10 p.m. and 10 a.m. to midnight on the weekends. We grew up in that world. We didn’t really see it as a bad thing. It’s just what we did. Little did we know that 40 years later we’d have this huge retail place with customers from all over the world.

Gilbert Jr.: My dad’s first customers were at the La Mirada swap meet. A guy named Popeye introduced us to the biker scene. We started with only one table and a Dodge Charger. My parents would have to sit in the Charger because we didn’t have a canopy for shade. My dad would always say “I know it’s tough on you guys but in the end it will benefit you.” Sure enough my dad has proven that to be true.

Eric: I was the youngest so I was a little more spoiled and started at age 12. I wasn’t ready to run the business but I had a general knowledge of how things worked. Joe taught me how to measure so we helped each other. Now I’m here everyday taking care of the customers. People come from everywhere. We had a guy come down from Switzerland just to buy an Espinoza t-shirt. Over the years my dad has built a steady clientele. We offer the type of customization others can’t. We can take a basic vest and do whatever you want with it. You might have a small chest and a big belly, but we can make a vest that fits right. That’s what my dad offers to the people that no one else can.

When it comes to the Chicano-style riders, the style has always been clean cut with ironed pants and shirts and never looking grungy. We always presented our bikes and ourselves the right way. That’s how we were as Chicano men back in the day and as time progressed that’s how we still are. Chicano men tend to want the longer vest that is fitted and looking good. They don’t want to go and buy a tiny vest. Also, we treat everyone as family and with respect no matter what background you come from.

Joe: As you can see it’s always been a family business so it doesn’t feel like we’re working. It’s more like being with family. Eric is 100 percent like my dad. He has that type of personality that makes people want to come in and talk to him for hours. He acts exactly how my dad does by spending a lot of time with customers, but now my dad gets on his case for doing the exact same thing! (laughs). Two years ago I tried to figure out how to launch a Web site for a mass market. You can’t. How do you show a 100 percent custom experience to a mass market? The way I try to appeal to the public is to explain why it’s worth it to take a ride here whether you’re in San Diego, San Francisco or other surrounding states. Whenever you’re in California, come on in. I’ve been trying to get the word out that to wear an Espinoza cut is to have something special. We must be doing something right because we realize it’s more than a business when my dad shows up to an event and a crowd surrounds him. They all want to say hi to my pops. That’s when you know it’s more than making cuts for riders. Funny part is, my dad hates crowds and usually tells me ‘Mijo get me a beer’. They love you, huh dad?

Gilberto: The people they love me (big laughs).

Does the Espinoza family ride together also?

Eric: My dad stopped riding in 1991 until about 3 years ago when I started working full time for him. Watching a pack of bikes leave the shop everyday, I’d get so pissed off and say, “I need a bike! I need a bike!” I kept telling my dad I need a co-signer. (laughs) He finally said OK. I bought a 2010 Dyna Street Bob. I guess I was watching too much Sons of Anarchy. (laughs) When my dad was there with me, he fell in love with a trike and bought it on the spot.

Joe: I went with them just for moral support and sat on a Softail. I bought it that same day also. Two months later my brother (Gilbert Jr.) bought a motorcycle and eventually, his son bought a bike too—now all three generations ride.

Gilberto: Thank you all for your business.