Newsletter
Sign Up today for our FREE Newsletter and get the latest articles and news delivered right to your inbox.
Home » Shaq’s 1964 Impala Gets the Chip Foose Treatment 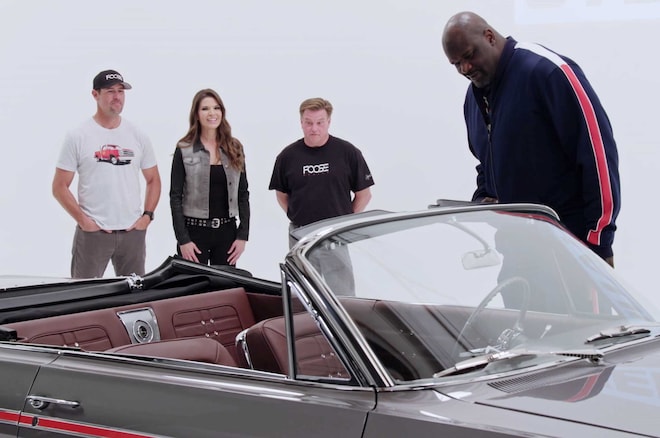 On a recent episode of Overhaulin’, Chip Foose and the A-Team took on one of their biggest challenges ever: restoring a car for NBA Hall of Famer and basketball legend Shaquille O’Neal. The car, a 1964 Chevy Impala, was a birthday gift from Anthony “Chicago” Hall, an old friend of Shaq’s who wanted to repay him for all the kindness Shaq has given him and others over the years.

GET THE BEST DEAL EVER on the MotorTrend App, $1 per month, to watch the latest episode of Overhaulin’, along with 3,500+ hours of binge-worthy automotive entertainment.

The ’64 Impala was a car Shaq had been wanting ever since he first moved to Los Angeles and saw one in a Dr. Dre and Snoop Dogg music video, but despite wanting one for so long, Shaq never actively started looking for one until after he retired from basketball.

When the Overhaulin’ crew got Shaq’s Impala, host Chris Jacobs said the car ran really well but it was a “50-footer… looks great from 50 feet but when you get closer the issues start showing up.” Aside from dealing with copious amounts of rust and other problems that would come up when restoring a car that is more than a half-century old, Chip and the A-Team had to figure out how to modify the Impala so the 7-foot, 1-inch Shaq could comfortably sit in the Impala and still be able to drive it with his size 23 feet.

To make sure they could properly build the car for Shaq, Chip had former NBA player and shot-blocking specialist, James “Shaq Stopper” McIlvaine come in as a fitment double to see where they would need to position the driver seat and steering wheel. After seeing how a 7-foot-tall former NBA player would sit in the Impala, it was decided to relocate the driver seat farther back and extend the steering column by 6 inches so Shaq would have plenty of legroom and still be able to comfortably reach the steering wheel. To accommodate Shaq’s much-larger-than-average feet, the floorpan had to dropped by about 2 inches and a custom pedal setup built to give him plenty of foot room and make sure he could still operate the throttle and brake pedals comfortably.

Under the Hood: LS Engine Swap and 4L60-E Transmission

In the end, Chip and the A-Team created a car that, in Chip’s words, was “extremely elegant, classy, almost stock—looking-but you definitely know it’s modified.” Built on a Roadster Shop chassis to guarantee the Impala would drive and handle like a modern sports car, an LS3 engine mated to a 4L60-E transmission was put under the hood to make sure it had plenty of power to get Shaq to wherever he needed to be. Inside, the interior was redone in leather by Alfredo of Al’s Garage, the factory bench seats were replaced with buckets while the backseat was replaced with a custom subwoofer enclosure that was built to resemble the original backseats.

On the outside, the car was painted dark gray with Chip’s classic Foose Fade added to it along with some red pinstripes on the side moldings and wheels to fit Shaq’s Superman theme and special quarter-panel badges were installed to pay homage to Shaq’s time with the Lakers and to honor his friend and former teammate, Kobe Bryant. When the car was revealed, Shaq was incredulous that it was the same car and was literally jumping for joy with Chip, Chris, and Adrienne. Shaq is a big man with a big heart, and there is nobody more deserving of such a big gift than him.