Newsletter
Sign Up today for our FREE Newsletter and get the latest articles and news delivered right to your inbox.
Home » Lonnie Jordan’s War Stories – Street Beat 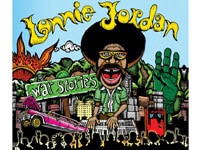 Lonnie Jordan is in high spirits when he talks about his new Fantasy Records CD, War Stories. “It’s not a comeback, it’s a flashback,” he says. “It’s all live, no sequencing, no tricks, nothing but real musicians playing real music. This music doesn’t have anything to do with thinking. I just play and feel and have a good time.” Lonnie does add a few keyboard overdubs, just like back in the War days, but even those were done “live” to tape.

War Stories details the amazing journey that took Lonnie and War, the band that he helped create, from the ghettos of Los Angeles, California, to stages and concert halls all around the world. “I’ve been thinking about writing a book based on my experiences in the ’60s and into the ’70s, musically and personally,” Lonnie admits. “Thinking about that got me thinking about the music, so this is the first chapter of my musical autobiography, the soundtrack to my life story.”

To capture the live vibe, Lonnie enlisted the aid of two young producers, guitarist J.B. Eckl, who worked with Carlos Santana, and bass player Pancho Tomaselli, a current member of War. They eventually put together a tight six-man band to back Lonnie in the studio and on an upcoming tour. “There’s a lot of Africa and Latin America in the music,” Lonnie relates. “War dipped into rock, jazz, blues, Latin and R&B, and we always liked to change up the arrangements, so we revisited a lot of War tunes to bring in some different flavors.”

“Don’t Let No One Get You Down,” for instance, is slower on War Stories than the original, and is highlighted by Lonnie’s Fender Rhodes. Lonnie remade “Baby Brother” in a more moody and bluesy style. The arrangement of “The World Is A Ghetto” blends Latin, jazz and Indian music, and the lyrics are, as Lonnie sadly admits, just as relevant today as when they were written. “Get Down” is faster than the original version, combining Lonnie’s exuberant vocals over a compulsive cumbia rhythm.

Lonnie also chose to cover the Rolling Stones’ “Paint It Black,” adding his own particular “Latin twist” to the piano-based number. He also does a slowed down version of Jimi Hendrix’ “Third Stone From The Sun.” “I jammed with Jimi on the last night of his life,” Lonnie remembers. “I wanted something cosmic to mirror Jimi’s soul. We slowed it down to give it a sense of energy coming from the sun, and returning to it.”

War Stories is the first solo effort from Lonnie since 1978, and will be a welcome addition to any War fan’s CD collection. It’s like hearing from an old friend to catch up on a few new stories and retell some of the old favorites. You’ll also want to catch Lonnie Jordan when he tours in support in the album, as well as War, who are still playing live. “We’re still doing our thing and bringing multicultural audiences to our concerts, all races, all ages,” Lonnie declares. “We go out with everyone from Steve Miller to Ice Cube and we still do lowrider shows.”