Newsletter
Sign Up today for our FREE Newsletter and get the latest articles and news delivered right to your inbox.
Home » Cesar Chavez The Film – Opening March 28th, 2014 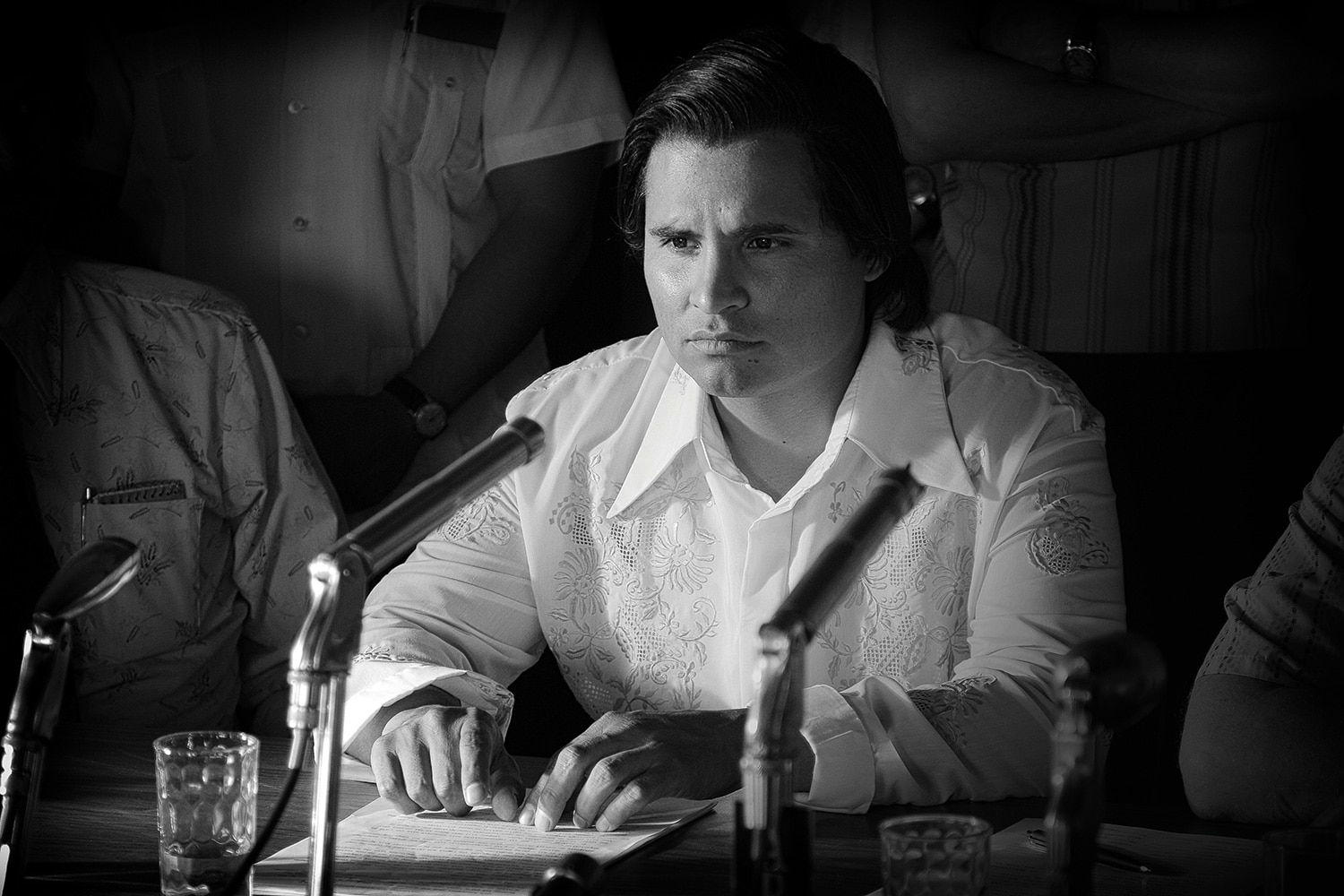 Chronicling the birth of a modern American movement, Cesar Chavez, the film, tells the story of the famed civil rights leader and labor organizer torn between his duties as a husband and father, and his commitment to securing a living wage for farm workers. Passionate but soft-spoken, Chavez embraced non-violence as he battled greed and prejudice in his struggle to bring dignity to people. Chavez inspired millions of Americans from all walks of life who never worked on a farm to fight for social justice. His triumphant journey is a remarkable testament to the power of one individual’s ability to change the world.

In Cesar Chavez, director Diego Luna presents a powerful cinematic portrait of the legendary activist. The film stars Michael Peña (End of Watch, Lionsgate’s Academy Award-winning Crash) in the title role, along with America Ferrera (“Ugly Betty,” End of Watch), Rosario Dawson (Sin City, Seven Pounds) and John Malkovich (In the Line of Fire, Summit Entertainment’s Red and Red 2). It opens nationwide on March 28 in 100 markets and 300 theaters. Please help us turn people out to fill these theaters.

Cesar Chavez gives us the unique opportunity to reach millions of good people who don’t think about where their food comes from—or about the men, women, and children who produce it.

In conjunction with the film, a petition has been launched urging President Obama to declare March 31 as the Cesar Chavez National Day of Service, which we are proud to support. While Cesar refused most personal awards, he would feel differently about a day of service—a day to do for others. Please sign the petition today at www.takepart.com/chavez.

Folks from all backgrounds and walks of life, especially in the Southwest, have “Cesar stories.” While I could tell you when and where he was born (1927, Yuma, Arizona) there was so much more to Cesar Chavez’s humanity, spirit, and sense of humor than what may be typically captured and documented. If you look him up, you will find that Cesar is mainly described as “a union leader, activist, and labor organizer who dedicated his life to improving treatment, pay, and working conditions for farm workers.”

He was also the UFW/United Farm Workers union co-founder (with Dolores Huerta). He was a husband, father, a grandfather, son, brother, friend, mentor, leader, and an icon. He was and is those things, and many more, to farm workers, activists, students, sympathizers, whether Mexican-American, Chicano, Latino, brown, black, Asian, or white. The list goes on, and the biographies, profiles, documentaries, a memorial site, state holiday, a U.S. Postage stamp, and a big-budget Hollywood film are all efforts to capture and honor his work and legacy.

So I started thinking, when do I remember first hearing of Cesar Chavez? And next, I thought, how much do we remember from the time we were 7 or 8 years old? Frozen images? Snapshots of moments in time, events—happy and sad ones, or perhaps full-blown, video-like sequences. When we’re about that age, turns out we really can and do remember quite a lot.

Many firsts, including first days of school, come to mind. One of the things I vividly recollect as an 8-year-old little kid was an incident. Nothing seemingly big, but there I was in shorts, Chuck Taylor low-top copies, and a turtleneck (a favorite cool outfit at the time, at least to me), with my long hair and skinny brown legs, standing very close to my mom and dad, outside of the Food Basket on Third Avenue in Chula Vista, California. I could hear a Doobie Brothers song playing through a passing car as we were walking toward the entrance of the grocery store. I heard them, before I saw them: the voices with the grape strike signs and the people marching outside and the chanting, “No compren uvas,” momentarily stopping in our tracks with my dad saying something in solidarity like, “Pues claro que no, paisanos.”

What was going on here? I turned to my mom after I noticed other little kids, likely 7 and 8-year-olds like me, carrying signs with their parents who were picketing. My mom told me we were not buying grapes because of the unfair way Mexican farm workers were treated, and that a good man named Cesar Chavez was their leader, and we had to do the right thing by supporting the effort (“la causa”) until there was change. We turned around and left. I may not have grasped all of it at the time, but one thing was pretty clear: no grapes or Food Basket. That was the first time I heard of Cesar Chavez and a galvanizing moment for a little Mexican girl from Tijuana who crossed the border for occasional trips into San Diego to buy some “American” groceries (as in “el sábado vamos al ‘otro lado’ a comprar poquita provisión”).

Many people will tell you their stories of hearing about Cesar Chavez and why his labor organizing and civil and human rights work on behalf of the poor, and of the many around him was a catalyst for social change through the farm worker movement. Chavez family members have many stories and recollections of this great man, truly a compendium of a lifetime of hard work and dedication for an entire family with Helen Chavez and their children in the movement, side by side with Cesar, and continuing his legacy.

In an informal exchange with three generations of Chavez women: Helen Chavez, Cesar’s wife and behind-the-scenes labor organizer in her own right; Anna Chavez Ybarra, his daughter; and Barbara Ybarra, his granddaughter, they reflected on Cesar’s love of family and the difficulties of the life and path they lived as a union-organizing family with an iconic leader. Helen Chavez said, “One of the hardest things about being married to someone who became such a well-known person was that he had to be gone a lot. We had eight young children when we started the union, so it was hard…”

Helen recalled a special memory from their wedding day: “Our wedding was small, but I remember Cesar taking photographs with a camera with a timer, something that was not widely in use at the time. [He liked things like that.]” His daughter, Anna Chavez Ybarra recalled a time as a teenager: “During the time we lived in Delano, when I was in high school, we went to school with all the grower’s kids, so there was conflict with them because of my dad. We were afraid when we got a little older because there were death threats during the grape strike … As I got older and had my own children [dad] was always excited to be with his grandchildren. When my daughter, Barbara, was little, she would go to the [UFW] office and he would stop meetings so he could play with her.”

Barbara Ybarra is one of many Chavez grandchildren, with their own wonderful and also difficult memories. I was curious to know when she first grasped that her grandfather was someone famous. She shared: “I first realized my grandfather, my Tata, was someone well known in the third grade, when we were living in Boston while my dad was in grad school. We went to a bookstore over the weekend, and I found a children’s book on my Tata. I took it to show and tell on Monday, and the school stopped. Everyone came to the classroom (all the teachers, principal). It was a pretty remarkable feeling, that they knew and admired him so much.

“He was also fun to be with. My Tata loved baseball. I remember special things like that about him. We always played baseball on holidays (Fourth of July, Easter), and my Tata was always the pitcher. He struck me out one time, and when we got in the car he knew I was mad, so he told me he would never do it again, and he didn’t.” Stories like these, remind us of the human side of people who become the iconic and inspirational figures of our times. They are seemingly ordinary men and women who have done extraordinary things. Cesar was extraordinary.

As 2014 unfolds, Cesar Chavez Day is celebrated on March 31, his birthday, as an official state holiday in California, Colorado, and Texas. The day is commemorated to promote service to the community in honor of his life and work, while other efforts to grow his legacy continue: talk of a national holiday in his honor, and a Chavez national park proposal with key efforts by the Cesar Chavez Foundation headed by his son Paul Chavez. Not to mention the recent release at the Sundance Film Festival of a documentary by Richard Ray Perez, Cesar’s Last Fast. On its heels, on March 28, the feature Cesar Chavez, directed by Diego Luna with an all-star cast opens across the U.S. in major theaters. What better time to reflect and consider the work, contribution, and legacy of a great American, Cesar Chavez, now through the fresh lens of new generations of Americans.

Linda Caballero Sotelo is a freelance writer and communications consultant based in Southern California. She may be reached at lsotelo@toltecmedia.net.