Newsletter
Sign Up today for our FREE Newsletter and get the latest articles and news delivered right to your inbox.
Home » Water & Power – Director and Actor Interview 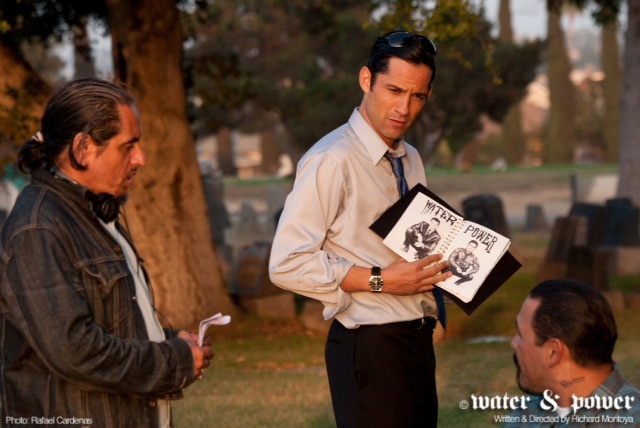 Chicano actor/writer Richard Montoya may be most recognized as the co-founder of the legendary comedy troupe Culture Clash – his thought-provoking, no-holds-barred performances have cracked up audiences for the past 25 years – but these days he’s getting a bit serious. His new film Water & Power, which he wrote and directed, has been described as a crime drama that takes an austere and gripping look at power politics and the people who hold our future in their hands.

The gritty flick, which was adapted from his theater play with the same name, takes place in the mean streets of East Los Angeles and centers around twins nicknamed Water and Power by their father who was an irrigation field man for the famed Department of Water and Power. Water, a decorated cop and Power, a senator, find themselves in the middle of a complex and dangerous web of the powerful and corrupt of Los Angeles.
The film boasts a cast of actors like Enrique Murciano (Without a Trace), Nicolas Gonzales (Resurrection Blvd.) Emilio Rivera (Gang Related) and also stars the late Lupe Ontiveros in her final screen performance.

LRM had the opportunity to speak to Montoya and Rivera (who plays “Norte/Sur”) in the midst of their hectic promotion schedule to get the low-down on the making of the film, which
will be released in select AMC theaters May 2.

LRM: Can you tell us a bit about the movie?

ER: In a nutshell it’s about the love of two brothers. One is a cop and the other is a senator. It’s about the sacrifices that they make for one another to get each other out of a jam. It’s great, well-written story that takes place in the East Side of Los Angeles. You’re gonna dig it.

LRM: Can you tell us what inspired the film?

RM: Los Angeles inspired the film. I was always fascinated with the landscape of the town. Different parts of the town have different vibes to it. East LA is obviously very different than Brentwood or Beverly Hills. The last neighborhood I lived in before I moved over by Cal State LA was a neighborhood where many movies were filmed including Chinatown. I just always looked at the city with a fascination and looked at East LA specifically with a lot of love and a little bit of fear. I wanted to tell a story about the place where Boulevard Nights was filmed or where American Me was filmed, or Zoot Suit, you know.

LRM: Much of the film deals with the recent power and politics in Los Angeles.

RM: Yeah. We had just done a play at the Mark Taper Forum in LA called “Chavez Ravine,” which is about the building of Dodger Stadium. It looked very closely at the powers of LA throughout the 30s, the 40s and the 50s. So the next logical step was to look at the power of LA today and how much it’s shifted. We had our first Chicano mayor, Antonio Villaraigosa elected and now we have our second, partially, Chicano mayor Eric Garcetti. I hadn’t seen any movies or plays about that. Our raza does know power, but I wanted to examine that area where power can corrupt.

LRM: You also say that this is a film about L.A. Latinos aspiring to equality and opportunity.

RM: Yes. I think ambition and aspiring to be more is an important factor that’s in all of us. In Hollywood for instance, there’s like three Latino films coming out, but there should be 25. Equality for us is still a ladder that we are climbing whether it be in Hollywood or City Hall. What the film really speaks to is the fact that when we finally do get to the top, what are we doing up there? Are you looking out for number one? Are you amassing money? Are you going to be indicted and go to prison because you want more? I was reminded of that lesson that Cesar Chavez was trying to teach us. He was a labor leader, but he had heart and he was concerned about other people and things outside of his own personal needs. And that’s what we need to look at. What are we doing with our power?

LRM: Speaking of Latinos in Hollywood, why do you think there is such a lack of Latino films and TV shows?

RM: We’re making some headway. I think there’s a lot of things in development. There are people who are looking for that magic formula, but honest to God I feel that something so bold and so powerful and so beautiful needs to come from a writer or creator to change that. But mostly what’s happening right now is that executives who make the decisions are talking to Hispanic marketers first and asking, “Well, what do Hispanic people want and what do they like?” We like lots of things. We drive lowriders and we drive Prius’. We need to get the Hispanic marketers out of the way for a minute so that the writers and creatives can really get in there and create ideas that are on fire! We have to stop worrying about being loved so much. We just have to be sexy and sassy and deviant and be true to who and what we are. I’m looking for the show or movie that is not afraid to be Chicano and most people are afraid of that. I mean, like how long has Lowrider Magazine been around? We’re not going anywhere.

ER: Yeah. I am. I have a lowrider. It’s been in Lowrider Magazine. Lowrider‘s been a part of my life, all my life. Back in the days I would go to all the shows, but it’s a little hard now.

LRM: Emilio, can you tell us about your character “Norte/Sur”?

ER: Norte/Sur is a homeboy who is in a wheel chair throughout the movie. You’ll see in the movie how he got his name. It’s very poetic.

LRM: What can you say to people who might say that you’ve portrayed Latinos as stereotypical gangsters in your film?

RM: I say that’s B.S. Pick up a newspaper. We have White sheriff’s and senators who are going to prison. So who are the real criminals here? In my movie, Norte/Sur, the guy that you might look at as the vato loco from the streets, is the moral compass of the entire film. My characters are three dimensional. They are real people that live in a real world.

LRM: Emilio, I read your bio in Wikepedia that described you as an actor who usually plays “Mexican criminals.” How do you feel about that?

ER: It’s funny because I just read that a few weeks ago. I don’t really care. I was a criminal. I got clean and sober 23 years ago. I laugh because people who really know me know that I was a bad Mexican criminal in real life and I paid the price. It’s all good, it’s not who I am. If someone wants to put a camera on me and follow me around when I get home and do a reality show they’ll see that I help animals, I’m a humanitarian, I love my family and I take my son to school every day. It doesn’t bother me.

LRM: What do you want people to walk away with after viewing the film?

ER: I just want people to walk away feeling good. If they feel good, I feel good and I feel like being part of this movie was worth my time.

RM: I want people to not forget the wisdom that our parents and grandparents shared with us. The movie has values and has ethics, but not in a preachy, religious way. I don’t want people to forget the shoulders that we stood on or where we come from. I also want people to remember that the characters in Water & Power were ultimately loyal carnales and that’s very important.