Newsletter
Sign Up today for our FREE Newsletter and get the latest articles and news delivered right to your inbox.
Home » Latin Musician Carlos Santana – Greatest Hits 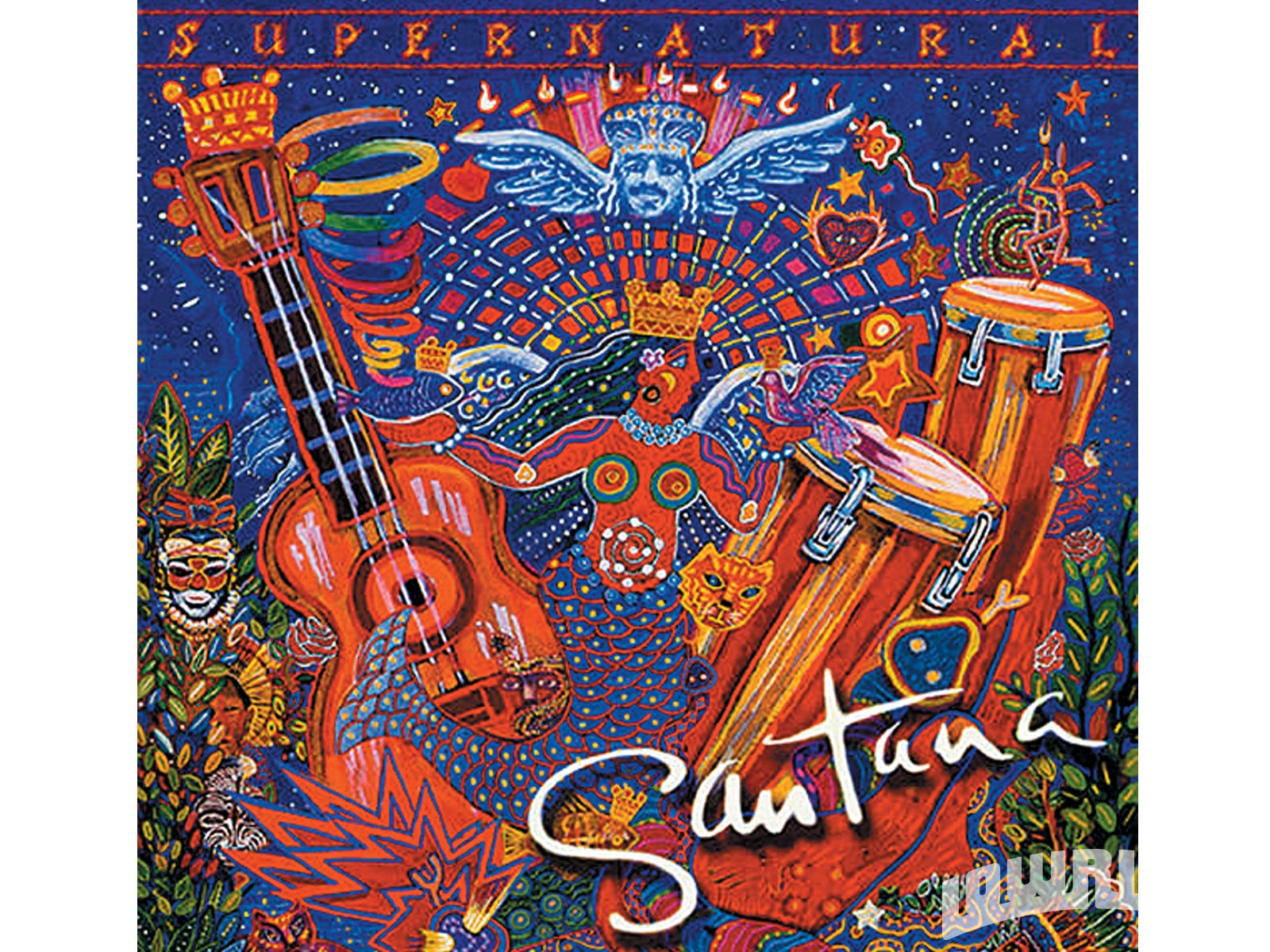 Carlos Santana is one of those rare musicians who comes along and completely changes the landscape of musical culture. His formative guitar riffs and signature tone have made him one of the most recognizable and influential musicians of all time, and he is revered worldwide as an inspiration by some of music’s most amazing talents. With an estimated 40 albums to his credit, which have sold a collective 90 million albums worldwide, as well as 10 Grammy Awards, 2 Latin Grammy Awards, a Latin Billboard Lifetime Achievement Award, and an induction into the Rock N’ Roll Hall of Fame, Carlos Santana is a musical virtuoso who’s music has defied genre, time, and culture. Simply put, his music speaks to everybody, from fans to critics alike, and it can be said that Carlos’ guitar playing is among the most soulful guitar playing ever captured on record or played live. His live performance of “Soul Sacrifice” at the Woodstock music festival instantly catapulted him to guitar legend status, and over the years he has played alongside such musical icons as Eric Clapton, Jeff Beck, John McLaughlin, Jaco Pastorius, Jack DeJohnette, Tony Williams, Herbie Hancock, Ron Carter, Wayne Shorter, Willie Nelson, Patrice Rushen, Alice Coltrane, and Michael Jackson, just to name a few. Carlos was placed at number 15 in Rolling Stone Magazine’s Top 100 Guitarists of All-Time list, and he has influenced everyone from Prince to Metallica’s Kirk Hammet with his amazing guitar work. It is often said that you don’t hear Carlos’ guitar, you feel it, prompting Hip Hop producer Wyclef Jean to remark that Carlos “makes his guitar cry.” In a career that spans nearly 50 years, Santana has broken down musical and cultural barriers with his music, and become one of the most intriguing, and spiritually inspiring musicians of all- time.

Carlos Santana was born in Autlán De Navarro, Jalisco, Mexico on July 20, 1947. Raised in a working class family, Carlos’ father played the violin in a Mariachi band, and became his earliest musical inspiration. Carlos was in awe of his father’s playing, and learned to play the violin by age five, and the guitar by age eight, a skill set that was furthered when he heard the music of Ritchie Valens. He later repaid his musical debt to Valens by playing on and writing the musical score for the hit movie, “La Bamba,” which became a blockbuster hit that paid homage to the Latino guitarist’s life and times. Santana’s family moved to Tijuana, and eventually moved to San Francisco, where Carlos went to high school, and became immersed in the counter-culture and music scene that emerged in that area during the ’60s. The scene was kind to the young musician, as he split time working as a dishwasher by day, and jamming with his newly formed “Santana Blues Band” in the bustling San Francisco club scene by night. The Santana Blues Band was well-received by the local scene, and it propelled them to earn a spot at the coveted Woodstock Music Festival, where their searing performance of “Soul Sacrifice” caught the attention of legendary label guru Clive Davis, who signed the band to Columbia that year.

The first album the band produced was the self-titled “Santana,” which yielded the Lowrider anthem “Evil Ways,” which sounds as fresh today as it did on the album’s release date of January 10, 1969. The album went double platinum, and also featured the studio version of the Woodstock jam, “Soul Sacrifice.” The next album the band released was “Abraxas,” which also featured a classic Lowrider hit, “Black Magic Woman”, as well as the standouts, “Oye Como Va,” and “Samba Para Ti.” The success of this trio of timeless classics pushed “Abraxas” to sell an unprecedented five million copies worldwide, sending Carlos into the stratosphere of world renown musicians, while making “world music” an entirely new genre of music. The success of these first two albums left a 23-year-old Carlos searching for something to ground him as a person. The stress of going from an unheralded musician from Jalisco, to a worldwide superstar left him reeling, and searching to find himself among a superficial world of critics and adoring fans. Spiritually, he turned to musician John McLaughlin, with whom he collaborated on the free-jazz project “Love, Devotion, and Surrender,” which went Gold in 1973. McLaughlin introduced Santana and his wife Deborah into the world of meditation, through their personal guru, Sri Chinmoy. This spiritual awakening would forever ground Santana, and allow him to be grateful for his musical gifts. Santana became a born-again Christian later on in life because of this spiritual awareness, prompting him to say, “I carry the dreams and the aspirations of my people…so I take a lot of pride in presenting myself as a man first, and then if you want. Chicano, Latin, Mexican. But I’m a person and a spirit first.” This awareness and humbleness has led Santana to become sincere and grateful for his ability to play the guitar and write a song, and has ultimately led him to connect with many people through his music, shattering the boundaries of race, culture, religion, and ignorance.

Santana held saxophonist John Coltrane among his greatest influences, and credits John for teaching him how to turn his instrument into a voice, through his classic album “A Love Supreme.” This led Carlos to collaborate with John’s widow, Alice, on the album, “Illuminations.” The album was a free-jazz album, which furthered Carlos’ ability in the minds of the critics, while giving him invaluable musical confidence and intuition. This experience shaped Carlos, as he spent the rest of the ’70s getting in touch with his funky side, and experiencing more pop and American success within his music. The ’80s saw Santana continuing his funk and soul success, despite the emergence of synthesizers and decidedly “less funky” instruments and technologies. He performed at Live Aid in 1985 and also scored the film “La Bamba,” in this decade. Throughout the ’80s, Santana continued his infatuation with Jazz, collaborating with the legendary Weather Report, and artists like Herbie Hancock, and Patrice Rushen. The early ’90s left Carlos’ commercial success reeling, although he maintained his critical following. It would be through an idea with Arista mogul Clive Davis, the man who originally signed Santana, that he would ultimately see his biggest commercial success.

“Supernatural” was released in 1999, and went on to sell a whopping 26 million records, thanks to Santana’s Zen-like chemistry with newer pop artists, like Lauryn Hill, Wyclef Jean, and Matchbox 20 front man Rob Thomas. “Smooth” and “Maria Maria” became club and radio staples, and the artists fortunate enough to be included in this project credit Carlos for showing them what music is truly all about. The style, the passion, and the love that Carlos Santana has for music rubbed off on his collaborators, and reaffirmed his position as a musical phenomenon, even though this album was released almost 40 years into his career. The success of “Supernatural” sent Carlos back into the studio with other popular musicians for “Shaman,” which was released in 2002, and yielded the hit, “The Game of Love,” with pop sensation Michelle Branch.

Today, Carlos Santana can be seen with his band at the Hard Rock Casino in Las Vegas until the end of 2010. Through a career that has lasted almost 50 years, a band that has endured several line-up changes, a spiritual journey that has encompassed a myriad of different beliefs, and over 40 albums, Carlos Santana remains as a pinnacle of musicianship and a testament to the power of music. He is respected the world over among fans, peers, and critics alike, and his tunes can still be heard blaring from the speakers of every Lowrider around the world. Carlos’ music is simply a gift from God, and he acknowledges it in the very same way. If you’re interested in Santana’s music, “Ultimate Santana” would be a great place to start, as it features his early music as well as his more recent hits. The world is a better place thanks to the music of this Latino legend, and our culture has certainly benefitted from his timeless musicianship and beautiful spirit.