Newsletter
Sign Up today for our FREE Newsletter and get the latest articles and news delivered right to your inbox.
Home » From Box to Competition Part 3 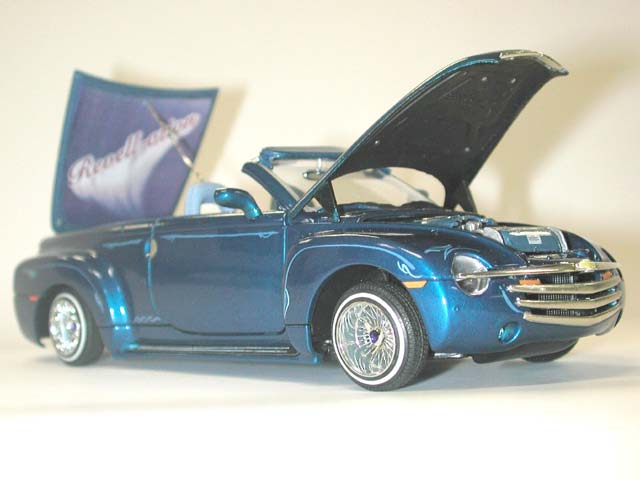 Okay! I know I have to give big apologies for not updating you guys on Friday before the show. But, it couldn’t be helped, so let’s move on and get to the show. We have done as much as possible to the truck and tonight we will get a few things cleaned up. Saturday will be a day of family work and we won’t be able to work on the truck till maybe 9 – 10 pm, so everything must be ready, or at least 99% done. This week we have been putting the truck together little by little. Every piece is cleaned with a cloth used for cleaning eyeglasses.

Let’s recap the week’s preparations for the truck. Sunday we redid the interior in a #2048 RAF AZUIRF Model Master (Military light blue) throughout the cab. For patented leather we used Model Master #2030 true blue FS15102 for all the insets. The chrome accents were done with the Bare Metal foil and the buttons were done with Testors silver chrome #2734. That was clued together with Great Planes PRO CA Cyanoacrylate glue activated by Great Planes PRO CA Activator #GPMR6035.

Monday: Was spent mostly buffing out the body and making sure that the accessories were placed in the right places and that they all fit. From here all we can do is hope that the truck sits level and slightly of the table. It’s funny that you can do all you have to make your model look low, but at the end you might have to raise or lower more than you wanted to because of one little mishap. Hopefully this SSR will sit 1/16th to 1/8th of an inch of the table in the rear at the lowest part of the model and from 1/8th to a max 3/16ths of an inch in the front, kind of like an action shot.

Tuesday: We did nothing but, add decals to the truck and try to make everything look as detailed as possible. It would have been a short night and a long day, than we remembered that the truck needed to be cleared. So off to the back yard spray booth we went again, this time we sprayed bug spray to make sure that we would not have any problems with the final coats of spray. The truck was sprayed with Testors gloss cote #1261 gloss lacquer overcoat. First it was dipped into a pan of hot water for five minutes then it was shaken for 1 minute. As the spray landed on the car, it seemed to mold it self to the parts. It was left to dry for one hour in the sun, long enough to dry for transport to the house safely.

Oh! Remember that fly that caused problems? Well, he probably died 24 hours later, but we got his relative, Yeah! He buzzed around the truck a couple of times and landed on the other table looking at what we were doing, so we walked around pretending to get a soda and BAM! It was fly soup a l carte. We would show you proof but it’s too gruesome. Satisfied, we continued to record the SSR for the website.

Wednesday: Went to some meetings and had a short lunch so we couldn’t work on the truck at all. The work couldn’t even be done at home cause of things that had to be done.

Thursday: Again was a full day and nothing was done during the lunch break. At home we clued all the accessories to the truck’s bed and then added the windows chrome and lights to the body of the truck.

Friday Morning! And we get to work for some early bird cleaning and final touches. We added the last decals and created a twisted bar for the bed cover. Lowrider Events donated the base for the truck and Tech Editor Saul added his input in the form of chrome strips for decoration on the display. Tonight will be spent with the guys at the Drag-N-Shop for final preparations for the Victorville Show on Sunday. Wish us luck, We’ll be honest with you, we don’t expect to win, but we know that it will be a crowed pleaser. There we witnessed the master David and his pinstriping skills. He saw our new base and his first words were ” Hey, that needs some pinstriping,” ten minutes later we had a show quality base for the truck. David couldn’t stop there, so he took the SSR’s top in hand and did a number on that puppy. Pinstriping it with dark blue insets outlined with mint green and accessorizing it with some aqua blue and green lines on each side of the top. When we put the top on the truck, the tattoo was plain to see but subtle enough not to out do the truck.

Come back on Wednesday for the results and pix of it at the 13th Annual Cactus Classic Model Car Show.