Newsletter
Sign Up today for our FREE Newsletter and get the latest articles and news delivered right to your inbox.
Home » The Skateboard Connection Art Show Relies on Skate Decks to Showcase Lowrider Artist Creativity 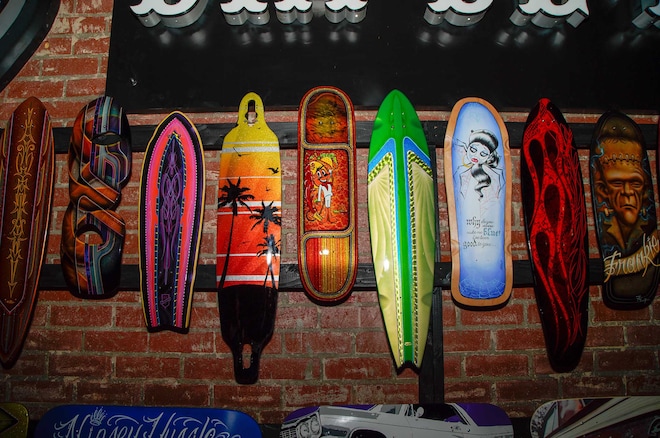 The Skateboard Connection Art Show is the result of efforts put forth by Southern California native Tim Muniga, who lives his life in constant motion. When he isn’t traveling from city to city to fulfill his responsibilities as a safety manager, Tim moonlights as a promoter for the thriving art culture in Los Angeles.

His inspiration to collaborate with global artists through skateboarding would lead Tim to join forces with a longtime friend who manufactures skate decks for major brands. Tim’s idea was to share the vision of these artists by giving them a chance to paint on the decks which serve as a wooden canvas. To accomplish this, boards are cut, sculpted and sanded, then assembled into “Deck Packs” which are shipped to the artists. Months later, the decks start trickling back in, and that is when Tim curates this unique show.

It took some convincing from friends before Tim set out to organize his first art show at Dia De Los Puercos – a popular Pomona, Ca, Mexican restaurant, but the risk paid off as fans traveled from all around the world to catch a glimpse of these one-of-a-kind boards. Each skateboard had its own unique design and Tim made sure to showcase nine artists of all styles to keep audiences intrigued. “I wanted the attendees to see a little bit of everything,” he says, and after about a month on display, nearly all of the skateboards had found a forever home, and Tim has since begun receiving requests to take his art show on the road to Dallas and Phoenix. “Art is Life – Life is Art”