Newsletter
Sign Up today for our FREE Newsletter and get the latest articles and news delivered right to your inbox.
Home » The Master of Miniatures – Lowriding and Model Cars 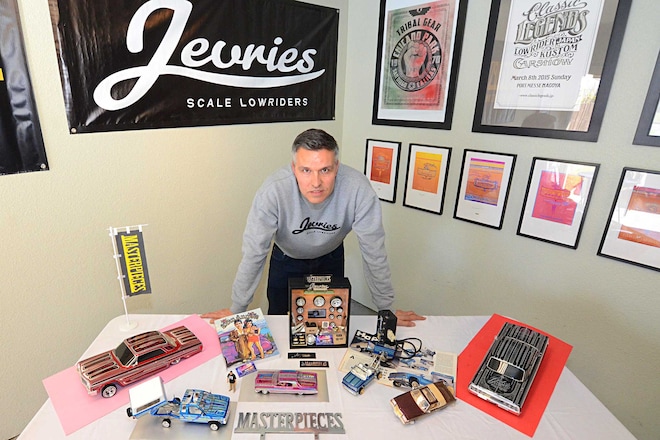 Jeroen “Jevries” de Vries has had a longstanding obsession with American cars, something that was hard to find in the Netherlands where he was born. He loved the chrome, admired the body styles, and that obsession grew into something even larger and life changing when he saw his first lowrider hopping on an American television series.

It had such an influence on his life that it became a central focus of what he loved and continues to do.

Coming from a lineage of artisans, his parents and grandparents on both sides worked in various industries, including steel parts construction, graphic design, painting, quilting, and woodworking. Being surrounded by this creativity allowed him to explore his own, and it was at around 8 years old that he started building models patterned after the very cars he saw in Lowrider magazine. “I recognized the art, creativity, realness, and passion in lowriding. It’s the opposite of what many believe a car needs to be. Instead of being optimized for speed, [lowriders] are optimized to cruise in style with the owner’s personal touch all over it,” he says.

Inspired by Erik Casarez’s hopping 1964 Impala model car featured in an issue of LR, he was determined to make his own. Limited by a lack of parts in the Netherlands, Jevries was relentless in his pursuit, so he decided to make his own parts. Using small HO train motors, waxed dental floss, and small fishing weights, he improvised his models to lift, hop, and roll. Not long after, Jevries mastered the art of building working chassis and electronic parts. It’s a demanding hobby that’s tedious and straining on the eyes, and while he can lay a basic paintjob, he opts to collaborate with others to get the best custom paintjobs done. “It’s always challenging starting with a standard plastic model kit or RC car body to bring it to life and to have it look and behave like a real lowrider car,” Jevries says.

For decades, Jevries has been making model lowriders and sharing them with people all over the world. He admits, “Lowriding is a passion and obsession of mine. I think, breathe, and dream about it. Always trying to come up with new tricks to add to my cars.” He had his models displayed in a three-month exhibition at the Ben Maltz Gallery as well as the Petersen Museum. He has traveled to Japan several times and exhibited at Mooneyes in Yokohama but his largest reach is on social media where YouTube, Instagram, and Facebook adores and appreciates his work.

Among the highlights of his collection are:

Over the years, Jevries has been inspired by talented builders like Armando Flores, David Anthony Garcia, Gary Seeds, Carlos Avelar, and Bear Garcia. They showed him how to capture the essence and art of lowriding in scale. “Armando Flores and David A. Garcia were my biggest inspirations because they build stunning, static lowrider creations, as well as inventive working model cars that could hop and even throw sparks.” Fortunate enough to meet his heroes, Jevries even became a member of Masterpieces, one of the most prestigious model car associations, and he feels truly blessed.

Jevries would like to thank his beautiful wife, Joelle, and his parents. He would also like to give a big thank you to Armando Flores and family, Juan Amezcua, David de Baca from Teen Angel, Danny Hidalgo, Francisco Pancho Barron, Fahmi Freeflow, and everyone else who has been so supportive.