Newsletter
Sign Up today for our FREE Newsletter and get the latest articles and news delivered right to your inbox.
Home » Lowrider Artist Megan Galaviz 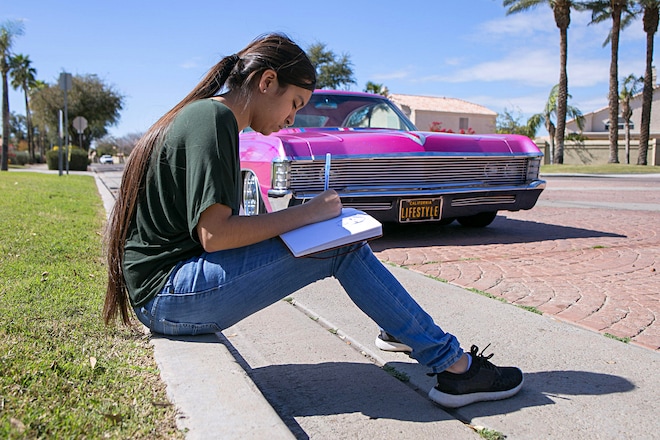 When a lowrider is building his cars, choosing color schemes, striping patterns, interior lines, and body designs, he is thinking about the final result as a masterpiece worthy of being displayed at the finest car shows. What we fail to realize sometimes is that there may be little eyes watching the process and taking note of the many artistic details coming together. Such was the case with Albert Galaviz and his daughter, Megan. As Albert built lowriders throughout her entire childhood, Megan became influenced from a very young age by the color play and designing aspects that she watched her father create. Aside from building lowriders, Megan also saw her dad build model cars, painting them with creative details. Instead of paying attention at school, she found herself drawing and doodling. Her mind became inspired by all the “art” around her.

As she grew older, she began to experiment with different mediums, such as watercolors, colored pencils, and oils. By 2015, she realized that art would be the direction her life was heading into and began posting her work on her social media account. While she never sought to be praised, she never expected the negativity that some people began to post in her comments section. “No one will ever pay you for that,” was one comment that hit her hard. Motivated by that same negativity, Megan threw herself deeper into her art, finding that painting with oils was especially therapeutic. At 16 years old, her first art piece sold for $250 in a Downtown Phoenix art gallery. Nowadays, her art can be found displayed in various Phoenix galleries and she is considered a legitimate up-and-coming artist, with a waitlist time of several months. Her versatility and dedication is well known in the artist community, and her young age only adds to her clout.

Megan’s dream is to become a videogame designer or perhaps even a Disney/Pixar artist, but for now she is happy shutting out the negativity and breaking through her growing artistic abilities. While she looks to the future of her art, she remembers the origins too … little eyes watching as those candy paint schemes and lines are laid down onto a lowrider, and all the details that go into creating a work of art.