Newsletter
Sign Up today for our FREE Newsletter and get the latest articles and news delivered right to your inbox.
Home » Ken Tamashiro – What’s Your Type? 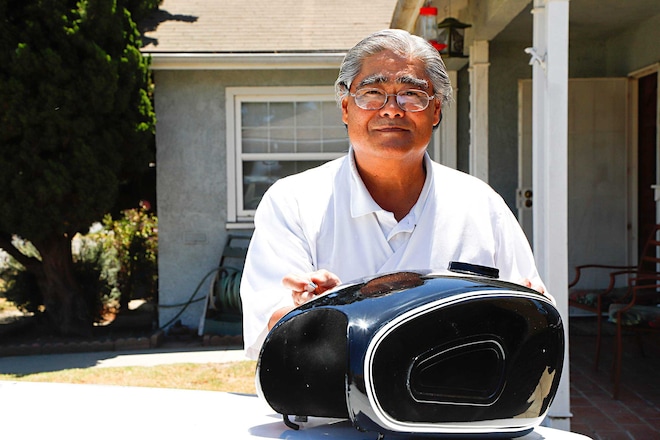 From custom signs and banners to the occasional pinstriping job, Ken can bring to life the most intricate pieces of typographic art, and his favorite canvas still remains the automobile. Although he’s mostly behind the scenes in car culture, Ken’s artwork is displayed front and center for thousands to admire and it all started in 1970, when Ken took his 53′ Chevy to a shop for a custom lettering job.

During the process, a lightbulb went off in his head and he thought to himself, “I can do this too” so Ken enrolled in art classes at Pasadena City College and L.A. Tech Trade where he transformed his new skillset into his own graphic design business. Five years later, Ken’s Custom Signs was launched into existence and he’s been blessing the world since.

He started off hand painting letters, but as technology evolved, Ken transitioned to Photoshop and other design programs to expand his offerings. While some classic car enthusiasts prefer lettering by hand, many more appreciate the advanced designs which Ken can produce via computer. Today, Ken is slowly moving away from pinstriping to focus his creative energy on signs. “I would rather focus on expanding my craft by learning new techniques to please my clients,” Ken says. He finds inspiration by flipping through magazines and immersing himself in L.A. car culture to learn exactly what his customers want from him.

But ask Ken how he found himself the owner of his own business, and he’ll credit his mother for pushing him and his devotion to spirituality. In all, it’s a story about one man’s ambition to leave the world a prettier place, and from the looks of his portfolio his job has long been done, but the continual blessings that come out of his studio are proof that the world would be a boring place without artisans such as Ken Tamashiro.