Newsletter
Sign Up today for our FREE Newsletter and get the latest articles and news delivered right to your inbox.
Home » San Diego Custom Painter and Pinstripe Artist, Jon Wilmot 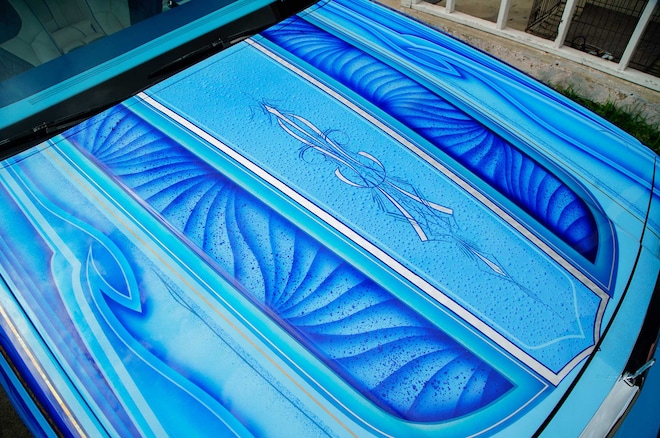 Turning concept into reality is what makes Jon Wilmot, a custom painter specializing in pinstripe and airbrush work, tick. He’s become a household name for those looking to spice up their rides but things didn’t come easy for him. For the past two decades, the San Diego-based artist has built quite the reputation, even earning himself the nickname “Jonny B. Good,” a moniker which pays homage to the quality of his work. But the road to greatness has been paved with its fair share of roadblocks and he’ll tell you firsthand.

Prior to moving to San Diego, Jon spent 10 years in Las Vegas where he honed his skills but even before that, he was off to a rocky start. In his teens, Jon was caught tagging on city property. Rather than scold him, his parents were supportive and told him to pursue his creativity through legal channels that could run well beyond tagging.

At 17, Jon’s father wanted to challenge his creativity, so he introduced him to automotive painting at his shop. Since then, there’s not a day that’s gone by where he isn’t painting, designing or creating airbrushed murals. From jet skis to classic cars, motorcycles to planes, Jon has found his purpose and the world—and everything in it—is his canvas. For Jon, painting allows him to disconnect from the world. “It’s a thing of beauty, and when you get into the zone, it puts you in a state of Zen that is indescribable” he mentions.

Jon wouldn’t be where he is today without the support of his family and friends—and he’d like to send a special thanks to his parents for recognizing his talent and challenging him to pursue his higher purpose.

You can check out Jon’s work on Instagram @JonnyBGoodCustomz.