Newsletter
Sign Up today for our FREE Newsletter and get the latest articles and news delivered right to your inbox.
Home » The Story of Master Pinstriper Jeff “El Jefe” Roberts 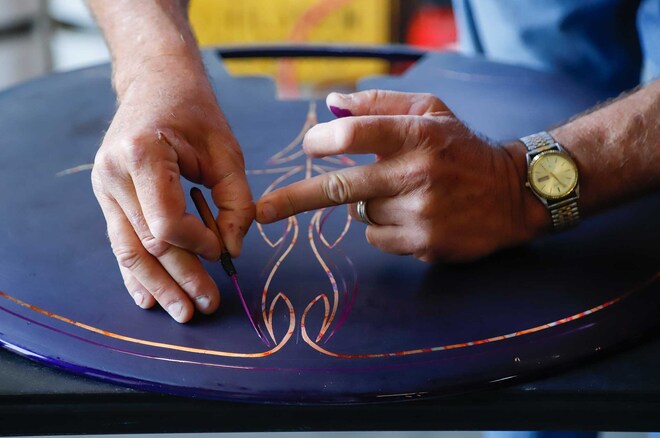 The standard custom car could easily be judged by the clarity of its paint, but for a lowrider, the devil is in the details. Now in the world of lowriding, choosing a paint scheme isn’t as easy as it looks. There’s much to ponder as owners face a multitude of decisions. From choosing the right color palette to incorporating striping, pearls or flakes, this can be a tedious task, and one best left to the discretion of your painter. But when it comes to pinstriping, there are many artists to choose from but only a few sit among the ruling elite. One artist that has become a household name is Jeff Roberts, aka “El Jefe.”

In the saturated lowrider capital of Southern California, Jeff Roberts continues to be a top choice for pinstripe projects throughout the world. It started about 30 years ago when El Jefe was thrust into the world of lowriding, and it happened after he picked up a 1963 Chevy truck. As the father of a growing family, he couldn’t afford to send his car to a professional paint shop, so he took matters into his own hands and purchased a pinstriping kit from an auto shop. Without any prior knowledge or experience, El Jefe carefully fitted his project car with intricate pinstriping in eye-catching colors and soon word traveled. He was hooked on pinstriping, and so were the many customers that began pouring in. With a full-time job, El Jefe used what time he had left to hone his skills and he’s since become a master at his craft.

Over the years, El Jefe has been entrusted by big names in the lowrider scene including Frank ‘Sugar Bear’ Silva. A while back, Frank Silva the 3 time Lowrider Champ from glory days past and also current Lowrider show judge, contacted “El Jefe” for a job. Frank wound up liking his work so much he hired Jeff for multiple projects. Among his other accolades, El Jefe used his talents to help pinstripe ‘El Rey,’ a 63′ Chevrolet Impala which was named Lowrider of the Year back in 2011. Frank would also be the first to tell you that his work is heavily influenced by Memo Ortega, a lowrider icon from So Cal who in his 80’s, continues to chop up cars and create flawless paint jobs. But that inspiration comes second to the discipline and hard work that El Jefe has put forth to master his craft, and it is that hard work and determination that has him sitting amidst legends and living life one line at a time.