Newsletter
Sign Up today for our FREE Newsletter and get the latest articles and news delivered right to your inbox.
Home » Harvey Lopez, Arizona Painter 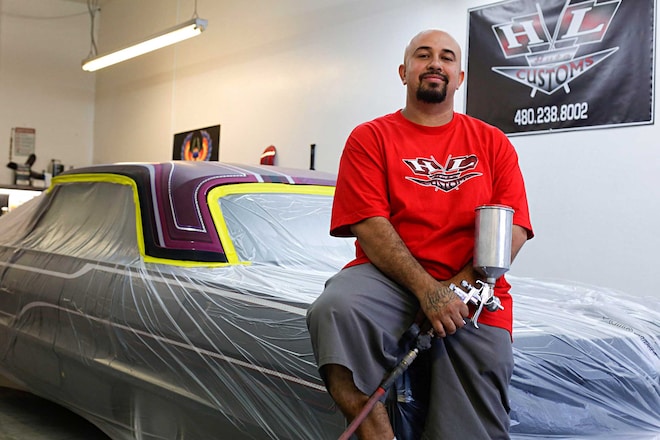 Time is our most valuable commodity. There are some who always appear to make the most of it … constantly seeming to get more accomplished than everyone else. For others, it’s the constant battle of never having enough time. Early on, Harvey Lopez of Chandler, Arizona, learned to maximize what little free time he had. Every day during his lunch break he would visit OG Mando, the longtime Arizona painting legend. The visits eventually developed from sweeping to sanding to eventually helping Mando prep cars for paint. For over three years Harvey spent every possible free moment learning and beginning to hone the craft that would eventually change his life. This unchanging routine came to a sudden halt when OG Mando’s shop had to close its doors. The closure forced Harvey to begin painting out of his own garage. It is there that the dreams of at some point owning his own shop slowly begin to materialize.

These days Harvey’s dream is now a reality, and over the last few years he has slowly become one of Arizona’s most sought-after painters. Mainly specializing in graphics, he is known to do it all. From the traditional two-stage finishes to the sought-after candy paintjobs. He’s been applying his skills to some of the local cars from car clubs like Nokturnal and Swift. “For the most part, I always use House of Kolor paint for all my custom work,” Harvey says. “The vibrancy of their finishes is exactly what I look for when I paint,” he adds, when asked why people wait months to get in for a paintjob. While Harvey is continuously growing, he knows he has to evolve in order to stay ahead of the competition. “You’re never a master painter,” Harvey says. “There is always something new to learn. Complacency will only lead to mediocrity,” he adds. The artistry and craft that Harvey Lopez has brought to the lowriding world only serves to elevate the game and, hopefully, inspire the next up-and-coming painter.