Newsletter
Sign Up today for our FREE Newsletter and get the latest articles and news delivered right to your inbox.
Home » Bobby Jauregui 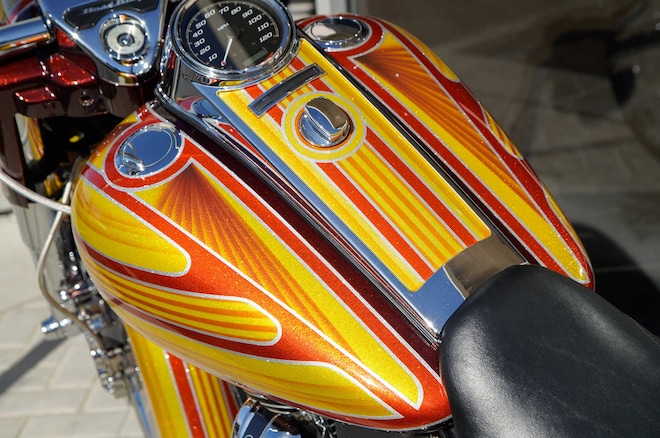 Southern California native Bobby Jauregui always dreamed big. As a teenager, he already knew which direction his life would take based on the inspirations he drew from his childhood.

In the mid-70s, every day was the same for Bobby. He would ride his bike to school every morning and on his way back home, he would stop at a custom auto shop to diligently watch the artists paint classic cars. At home, Bobby was immersed in the car culture thanks to his dad and uncles who also owned classic lowriders. He chose to pursue his passion because of the positive people who influenced him along the way.

Two years later, he executed his first paint job on a 78′ Monte Carlo. The car was painted black with red pearl and topped off the roof with multicolored kandy paint. The finished product was unique and one of a kind. Before successfully undertaking this paint job, Bobby had practiced on a couple of cars owned by his father’s friends including a two-door 48′ Chevy and a 66′ Impala. The self-taught painter pushed himself to learn the craft and artistic side of painting show cars.

Over the years, Bobby continued to hone his craft and launched many successful paint shops throughout SoCal. After a short stint in Arizona, he returned to California and opened up Bomb Squad Kustoms, also known as Kandy Konnection where he specializes in big flake paint jobs, all Kandy colors, and the original lacquers. He paints anything that comes through his doors including cars, bikes, motorcycles, and more. Bobby’s favorite part of the job is seeing the happiness on customers’ faces when a job is completed.

As he nears 40 years in the business, Bobby enjoys looking back at all of his successes in the car culture. His work has been featured in over 40 layouts in Lowrider Magazine, over 60 layouts in magazines from all over the world, movies and the first Chicano music video on MTV; ‘Sunday Afternoon’ by A Lighter Shade of Brown.

Bobby spends his time at his shop and teaches aspiring painters the old school techniques to keep the culture alive and well. He’s thankful for his parents who supported his goals and dreams along the way.