Newsletter
Sign Up today for our FREE Newsletter and get the latest articles and news delivered right to your inbox.
Home » Gilbert Silas – A Tattoo Artist from Oxnard 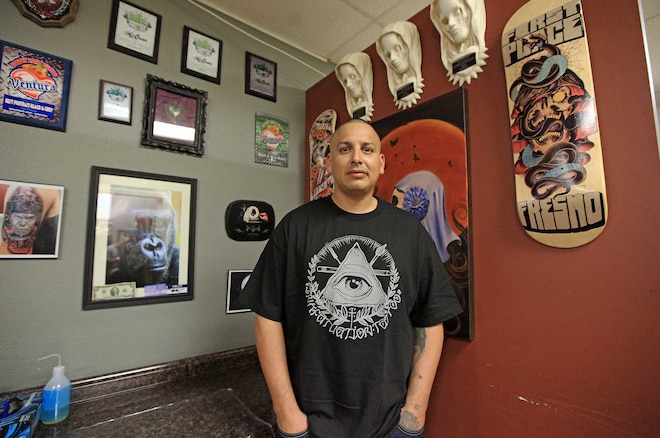 Raised by a single father, Gilbert Salas has many fond memories of his father-son relationship. In particular, he remembers his father dropping him off daily to the babysitters at 5am. Yet before dropping him off, his father would religiously hand him a newspaper and tell him to draw anything he saw in the paper, and to show him his creations later in the day.

“Since I was 5 years old, I would draw from the time I was dropped off to the babysitters, until the time I had to go to school at 8 am”, says the now well credited artist. This became a daily routine for nearly a decade, and his practice and discipline became clearly evident by the time he was only 14 years old. All around school, and the neighborhood, his peers became well aware of his trademark skills, and soon enough they also became a means to earn some extra cash.

At 14 years of age, Gilbert was approached by a friend who asked him to do a tattoo, and with the exception of just one minor intermission, he’s never looked back. “I started tattooing all my homeboy’s when I was a kid, and I did that for years”, says Gilbert. He got his first tattoo machine – a homemade unit – from a friend’s brother and he vividly remembers the first time his father walked in on him giving a tattoo. “I was tattooing my friend when my dad walked in on us”, he asked what we were doing and in a bit of a panic I told him “I was just trying to cover the tattoo that my friend already had on him”. When asked what his father’s response was, Gilbert says, “He just walked out of the room”.

As history would have it, Gilbert did was most average teens would do and found himself working a $10 an hour job. The job became tiresome; he soon realized that the money he made wasn’t long enough, so he decided to go back to his roots and get back into tattooing. After picking up a professional tattoo machine, he ventured back into his journey and reentered the world of tattooing. At the time, you have to remember that the industry isn’t what it is today and he’ll be the first to admit that it was a road less traveled in an industry that was still shunned by society. He also adds, that it was the trials and tribulations of his long journey, which makes him appreciate his well-earned success, and adds, “I think that’s why I’m able to appreciate and better understand what it is I do.”

From setting his own schedule, to traveling to countries he had only dreamed of, Mr. Salas continues to hone his skills and perfect his craft. In that quest, it’s given him a better understanding of the culture and is quick to mention that his fathers inspiration has helped him get where he is today, but also mentions that his childhood idols played a vital role in his life. That said, he would like to thank tattoo legends such as Jimmy Hartman, Pokes and Computer, Manuel Valenzuela, Chente and Tommy Montoya for not only helping him out, but for being an inspiration to his career.

You can check him out at Inkfatuation Tattoo in Port Hueneme, CA or follow him on Instagram via @GilbertSalas.