Newsletter
Sign Up today for our FREE Newsletter and get the latest articles and news delivered right to your inbox.
Home » Sublime 20th Anniversary 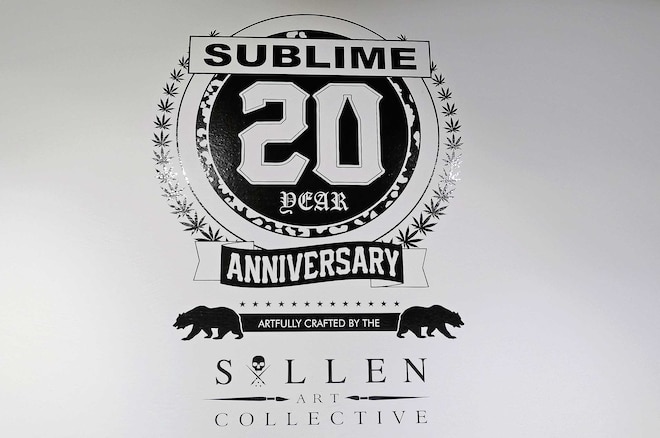 Tattoo artist Opie Ortiz of Long Beach, CA is best known for his artwork featured on Sublime album covers. Ortiz along with Troy Holmes (Bradley Nowell’s widow) have been trying to create a limited edition line for several years. It wasn’t until Troy hooked up with Sullen that they were able to make it happen. Sullen Clothing and Opie Ortiz hosted an art show at Collective Ink Gallery in Garden Grove, CA to release the new clothing line. The gallery theme was on the 20-year anniversary of Sublime’s self-titled final studio album. Artists that participate included Arlo DiCristina, Robert Atkinson, Carlos Torres, Ryan Smith, Maya Fonseca, Q and Alan Padilla.

Another artist displaying Paint And Hope from Orange County who is known for his custom painted 40oz bottles. “Tory had seen my bottles and contacted me on social medial about participating in the gallery.” With Sublime having a song titled “40 Oz. to Freedom” Paint and Hope was ideal to contribute something. One of the pieces that stood out from the crowd and had everyone talking was a Hernan D’aloia’s engraved metal sculpture. Hernan might be new to the tattoo art scene but he is an OG in the lowrider scene.