Newsletter
Sign Up today for our FREE Newsletter and get the latest articles and news delivered right to your inbox.
Home » El Moises – Featured Artist 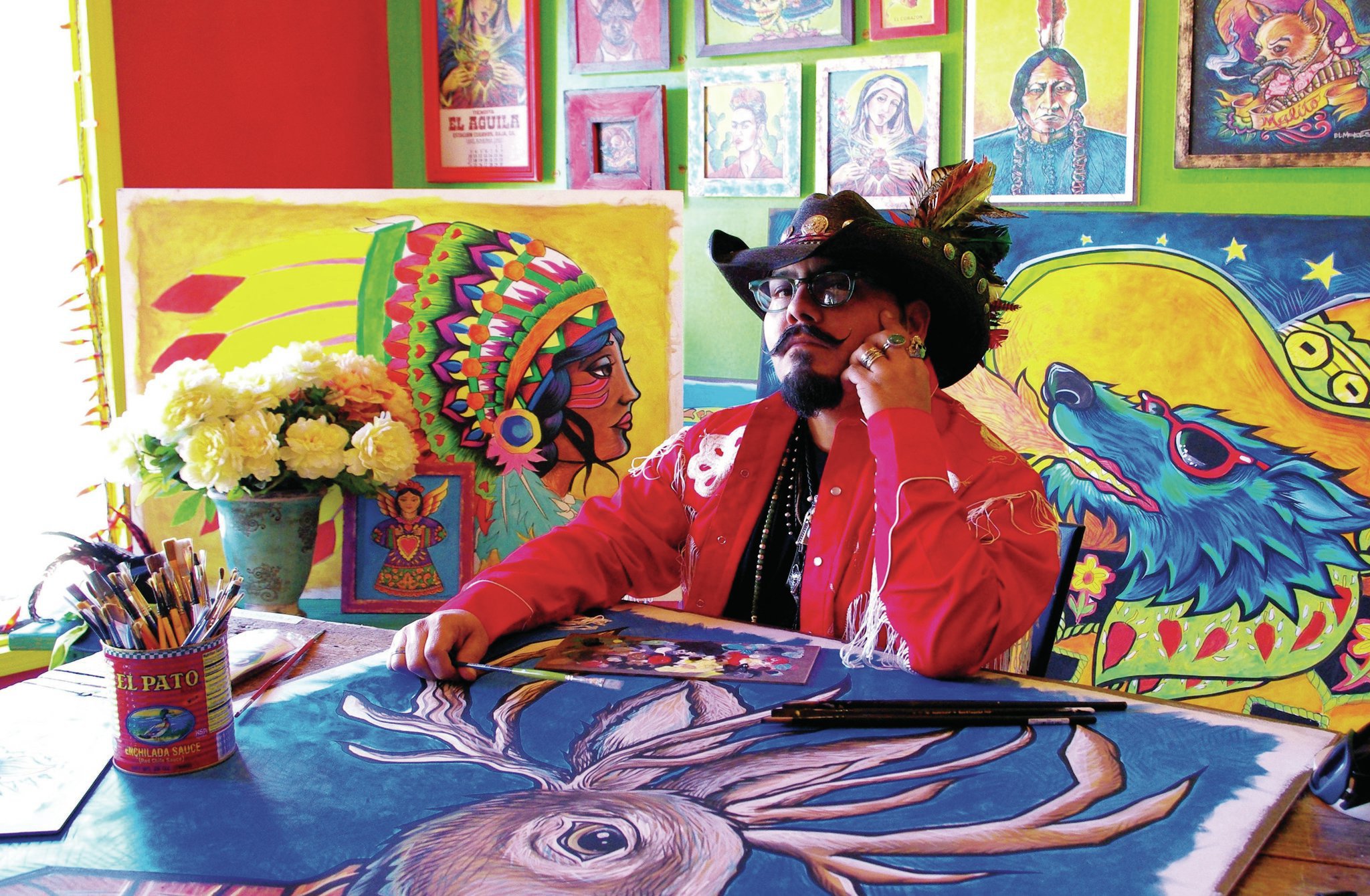 Growing up in the Southwest, the soon-to-be artist named Moises would gain a love for the Chicano cultural and scene at an early age. It helped a lot that his father used to work on cars and paint lowriders too. That in itself would give him the opportunity to look at lowriders up close and hands on. “I was influenced largely by the paint and pinstriping schemes that adorned lowriders. That influenced the ‘folk art’ part of me, as some of the first type of pinstriping I did was applied to many shapes of pottery I had made, and if you notice the striping on the cars that I painted, it resembles the style and looks I used on my pottery.”

As a sixth grader, Moises used to sell pieces of his artwork to classmates for a few dollars so he could use that money to buy art supplies, as his family couldn’t afford to buy it for him at that time. “I knew back then that I wanted to do this for the rest of my life, create art and share it. If I could sell it then that was cool too, but it’s mostly about sharing this blessing and talent that I was given. Sometimes as artists we forget that not everyone can do what we do,” he says.

His art is influenced by his surroundings. “My art is really a reflection of myself. Whether it’s influenced by lowriders or food, it’s something that is around or part of my upbringing.”

One of Moises’ greatest moments as an artist was being at the Peterson Museum with the late Gilbert “Magu” Lujan. “My art wasn’t accepted by everyone or everywhere, and he was the one artist who told me it was OK for my art to be different, and that it was cool to be different.” I looked up to him, and because of him I was able to break a lot of ground at that show.” Another show that was a highlight for Moises was the Cruisin’ Califas show in Oceanside, California, that was curated by Carlos and David C. de Baca. “That was the highlight of my life because I was able to showcase my work with many of the well-known Chicano artists.”

Moises has recently moved to Taos, New Mexico, where there’s a rich history and one of the nation’s most prominent artist colonies. Moises has recently opened his own gallery called El Moises’ Immaculate Heart Gallery. The high tourism in Taos has allowed Moises to sell his artwork everywhere, while living in the cultural area. He has also been getting involved in projects with the community by having the local kids come in and participate in coloring lowrider books and painting the popular Day of the Dead faces also. “I think I’m where I need to be as an artist. I try and stretch the envelope, so to speak. I draw to be different and that will get me along a lot farther to add to my style, flair, and paintings.”

For more information and to see more of his artwork, visit www.artedemoises.com.