Newsletter
Sign Up today for our FREE Newsletter and get the latest articles and news delivered right to your inbox.
Home » Made By The Chain Gang – Embroidery Kings 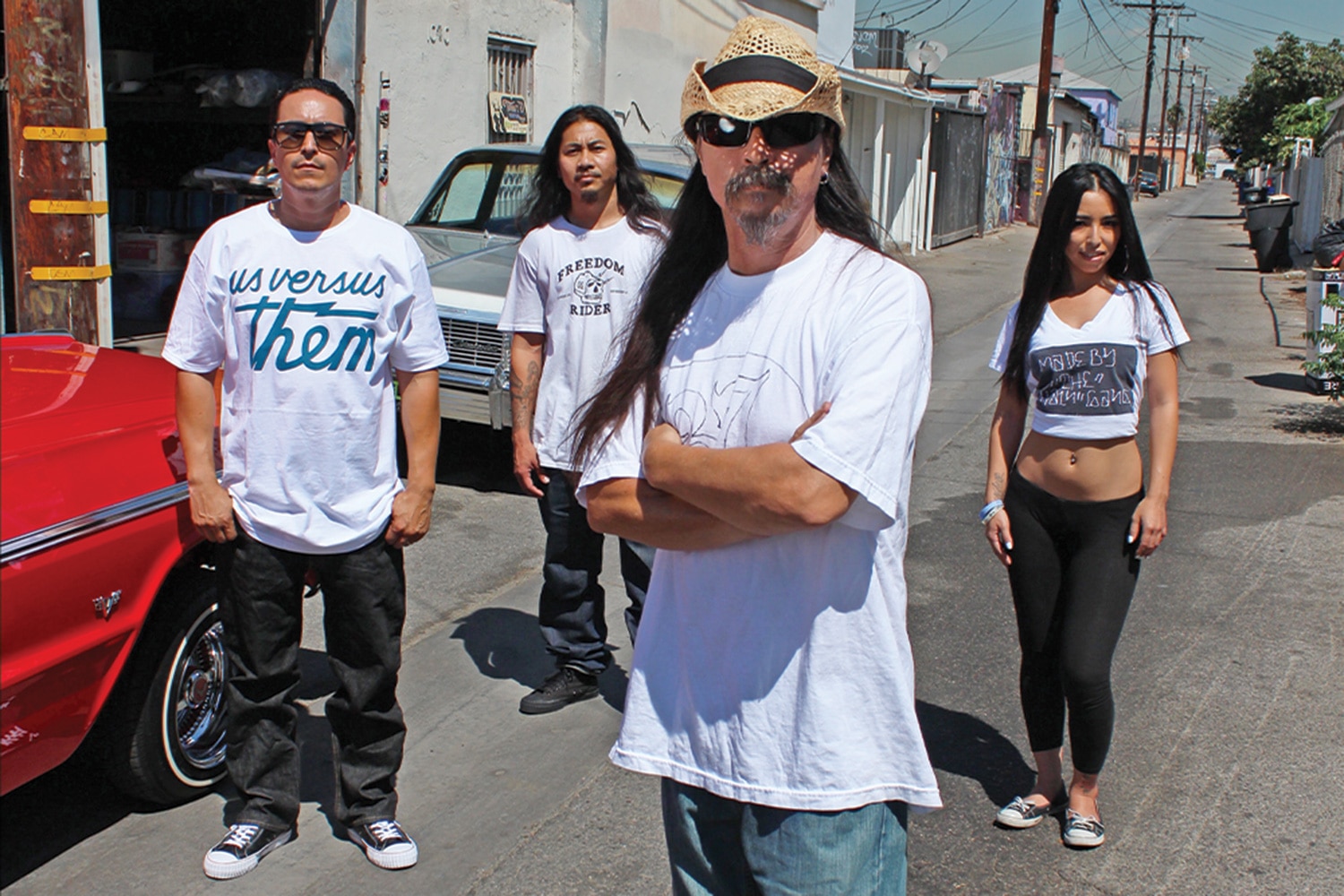 Car and bike clubs from East L.A. can be traced back for decades, and some of the oldest ones set the foundations for many of today’s modern clubs. Back in those early days, a member’s club insignia or jacket patch was a source of pride and honor, as it had to be rightfully earned. Each patch would be a work of art, carefully crafted by a skilled embroiderer. A close look at those old-school patches would showcase great detail and while any two patches of the same club logo would look similar because of the design, a side-by-side comparison would show that they were not exactly the same. The stitching could be slightly different as ample time and attention to detail was given with each one by the individual embroiderer, and the handmade nature of them made getting one even more of a unique honor.

Back then, there wasn’t a plethora of cookie-cutter embroiderers who would stamp out a computer-aided car club logo or design in less than a minute; much like the ones who can be found at the local malls and swap meets today. Instead, the embroiderers from the past had to create their patches by outlining their own stencils by hand, before using their artistic skills along with vintage chain stitch machines—many of which were discontinued back around the ’60s. For a club member or individual rider seeking that authentic old-school custom made patch and/or jacket, would have to take an in-depth look around the country to find those embroiderers of today who still carry on the classic traditions of vintage embroidery.

Thanks to the staff at Lowrider magazine, and of course the many lowriding men and women who are well connected, we are happy to shine a light on a skillful man by the name of “Tul.” A talented bunch, Tul and his team are known for providing numerous customers with one-of-a-kind apparel in that unique old-school embroidery format. Lowriding car clubs such as Islanders, Stylistics, Individuals, Majestics, Los Angeles, and Lifestyle are just a few of the many who come to Tul for their club jackets.

From the patches to the whole jacket, just about any combination of designs, material, and patterns can be carefully stitched together to create one eye-catching look to match perfectly with a driver’s ride. One extreme car enthusiast actually had a jacket made in a letterman jacket style, but with sleeves made out of the material used for convertible canvas tops, and the jacket’s inner lining carried a matching pattern to that of his ’64 Impala’s interior upholstery! Even the vehicle’s VIN number was tagged and stitched on the inside pocket!

As for Tul, this Los Angeles-raised man has always been an artistic individual and has been into lowriding ever since the age of 13. He got hooked up with his mentor, Tommy D, who originally had his own business doing the old-school embroidery, mostly for sports organizations. Tul had been personally looking for someone who still did the old chain stitch work and thanks to a mutual friend, he was placed in touch with Tommy and the two hit it off pretty well. With Tul constantly referring his lowriding contacts over to Tommy, and at the same time, learning the secrets to mastering embroidery, the duo soon realized they had something special that was in high demand.

About five years ago, Tommy D and Tul opened up their shop in East L.A. and called themselves the Chain Gang. They catered mostly to lowriding clubs, bike clubs, individual riders, and small businesses from the L.A. area. Their clientele even stretched all the way to Europe, Japan, and Australia! In keeping with the old-school tradition, the shop still utilizes the old Singer machines, which have technology that hasn’t changed since first being introduced in the early 1900s. The Chain Gang had to eventually enlist the help of other individuals as the business was doing well enough to expand. Tul’s compadre, Ed, and Tul’s girlfriend, Chiharu, have now become a part of the gang and help keep things running smoothly. Steven is their go-to guy when it comes to helping with designing club plaques and logos for their clients.

The apparel from The Chain Gang has definitely stretched out beyond club jackets, as it now includes western shirts, biker vests, and vintage garments. Tul says they have collaborated with some clothing lines, but he says the Chain Gang will always be there for those underground referrals and their longtime clients. Of course Lowrider magazine readers will also get special service!