Newsletter
Sign Up today for our FREE Newsletter and get the latest articles and news delivered right to your inbox.
Home » Air & Ink Master Artist Fonzy – Original 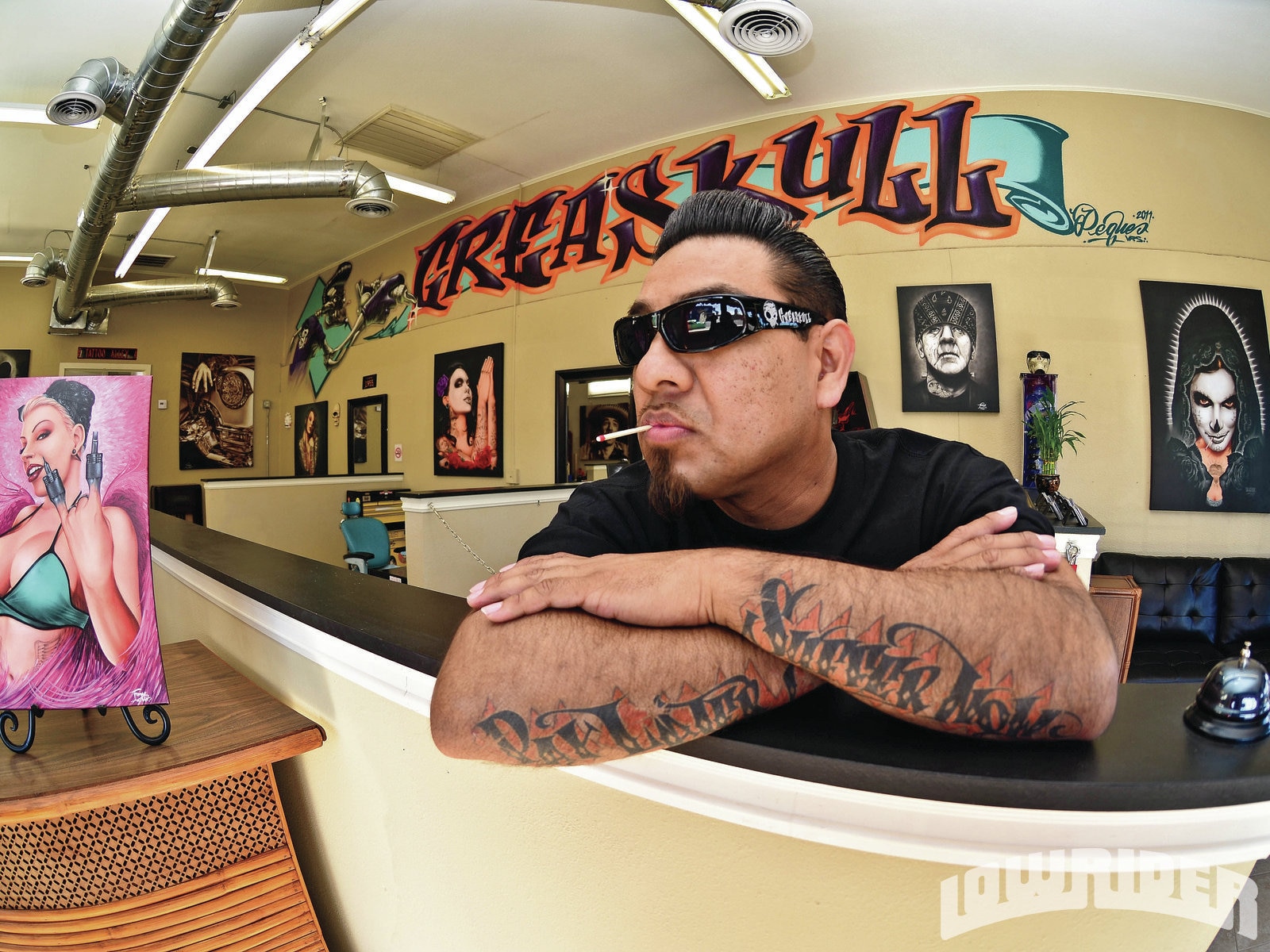 The city of Tijuana in Baja, California is often recognized by many for its tourism and manufacturing industries. The city’s proximity to Southern California and the US border attracts both tourists looking for a good time on the infamous Avenida Revolucion, and a number of foreign companies looking to establish manufacturing plants. Tijuana also boasts a vast arts community. The arts community is very active and world renowned for its various types of art including drawing, painting, graffiti, and music. The city of Tijuana is also where one of the Lowrider Culture’s most recognizable artist was born and raised and where he honed his talents.

The multi-talented artist known as Fonzy got his start at creating art as a young child in his hometown of Tijuana. As luck would have it, Fonzy’s mom is an art teacher, which gave him a great learning foundation. As soon as he was old enough to hold a drawing instrument, he was drawing everything from cartoon characters to different styles of lettering, and of course, women! His mother showed him the basics, and as he got older, he was influenced by other artists and his surroundings. Soon, not only was Fonzy painting and drawing, he was airbrushing as well. He noticed the growing Lowrider Culture in Tijuana and wanted to be a part of it; something he would soon accomplish through his airbrushing.

As great as the city of Tijuana is, Fonzy had the desire to grow as an artist and get more involved with the Lowrider Culture. He knew his options were limited in Tijuana, so he headed north to the Los Angeles area and ended up in the suburb of Montebello, California. In a matter of time, Fonzy started to get known for his airbrushed murals and his personal style. His identity was being formed, both artistically and literally.

When Fonzy moved to Montebello, he was not going by Fonzy, he was going by his birth name. The nick name Fonzy came from a combination of a fictional television show character and a reference from a friend of his.

In case some of you don’t know, from the mid-1970s to the mid-1980s, there was a television show called “Happy Days.” One of the characters on the show was named “Fonzie,” and he was the coolest character on the show. He dressed in a leather jacket, cuffed jeans, and had a pompadour. Fonzy has always been a huge fan of anything from the 1950’s era and considers himself a “Greaser,” so he was already dressing similar to the character from “Happy Days” when he moved to Montebello. His friend, Joker, from Elegants Car Club started to call him “Fonzie.” Fonzy liked the nickname and decided to keep it, but changed the “ie” to a “y.” Another personal style accessory, Fonzy is also known for the ever present wooden match stick he places in the corner of his mouth. It’s a part of him that he is never without. Some people need coffee every morning; Fonzy needs his match every morning.

Fonzy’s artistic abilities got him recognized fairly quick, and he was able to work on some of the top Lowrider builds like “Hustler 63” from Los Angeles Car Club, “Sundance” from Southside Car Club, and Miami, Florida’s “Certified Gangster,” to name a few. Through his work, he has traveled to Rome, Japan, Canada, Mexico, and various cities in the United States to work on customer projects. In September of 2011, he will be heading to London, England.

He has collaborated with companies like Tribal Gear, House of Kolor, Iwata, Alsa and Aset, to name a few. Fonzy and his art have also been featured in Lowrider Magazine, Lowrider Arte, Rebel Rodz, Airbrush Action, and a number of Japanese magazines like 38 Timez, Lost Angels, and Lowrider Japan. He has also been featured on the hit show “Living the Low Life,” and on Urban Latino TV.

I asked Fonzy to describe his artistic style, and he described it as “Low Greaser.” He explained that his art work is a mix of the Lowrider Culture and his Greaser style, and because he likes both styles, he combines them to make his own style.

Although Fonzy is well known for his airbrush art, he also dabbles in pinstripe, digital work, and more recently, he started tattooing on a regular basis. Initially, he began to tattoo around ten years ago, but did not put too much time into tattooing because he was doing a lot of murals at the time. As he has started to concentrate on his tattoo art, he has built up quite a client base. Like his airbrush art, he is striving to be the best tattoo artist he can be by practicing and fine-tuning his techniques. Like many of his fellow artists, Fonzy feels that the tattoo culture offers something different artistically, and what he learns in tattooing can be applied to his other artistic mediums.

In late 2010, Fonzy opened Greaskull Tattoo Alley in Fullerton California. The studio is a place for Fonzy to tattoo as well as draw, paint, and airbrush. People can also come in to Greaskull and purchase his art work. Fonzy also started a clothing brand called Greaskull as well. As of right now, the clothing brand consists of tee shirts with Fonzy’s artwork, but will eventually be expanded to a full line of merchandise with his designs.

With the opening of Greaskull Tattoo Alley, we asked Fonzy if he had any other plans for the future. He responded, “Well, I have a lot of goals for the future, but sometimes it’s better living in the present, because if you are always thinking of the future, you don’t realize that you have to do better things in the present to have a better future.” He ended his response with this statement; “People always dream, but you have to wake up and start doing your own thing and live your dream.” Judging on Fonzy’s accomplishments, he has been wide awake, doing his own thing and living his dream since he was a young child.

To book a Tattoo appointment or inquire about Fonzy’s art, he can be reached at: