Newsletter
Sign Up today for our FREE Newsletter and get the latest articles and news delivered right to your inbox.
Home » Interview With An Airbrush Artist – Rick Munoz 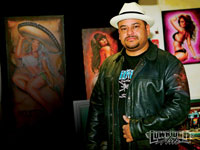 Rick Munoz started his airbrush career at a young age. The environment that he grew up in was what helped him master his craft. With so many airbrush artists in the world, Rick was one of the first airbrush artists to travel to South America and achieve celebrity status. Rick is now back in the United States airbrushing his way to the top by giving back to his community and local Los Angeles schools. We sat down with Rick and asked him a few questions about his trial and tribulations and his reasons for giving back to the community.

Were did you grow up?
I grew up in El Paso, Texas, and was raised in the eastside of Los Angeles. I was about 5 years old when we moved to Los Angeles. My mom and brother moved to a neighborhood that was heavy in gang activity. Growing up in that type of environment, you tend to get used to the violence that’s around you so you don’t think much about it. I spent most of my time at home drawing. I was fortunate enough not to get caught up in a gang.

How did living in East Los Angeles influence you in your art?
Living in East L.A. was a good experience. When I was younger, my schoolteachers would give me art materials to encourage me to keep drawing. I also used to watch artists paint wall murals and observe the custom lowrider cars drive up and down Whittier Boulevard.

What mediums were you using at the beginning?
At the beginning I started with pencils and color markers. Then I eventually tried oil painting, which I struggled with so I left it alone. I remember my first wall mural. I was 10 years old and it took me a while to convince my mom to let me draw on the wall-drawing on the wall was a big thing. I remember her telling me we can get kicked out according to the rent agreement if I drew on the wall. My mom got tired of me asking for permission so she finally said, “Yes, but no color.” When I took a picture of the wall where I drew, nothing showed up on the picture because of the lack of color. All you can see is a big white wall. It was a big disappointment so I left the mural scene.

Where did you get your influence in building model cars?
My cousin Manny showed me some of the models he used to build from hot-rods to lowrider cars with beautiful paintjobs-I was impressed. Before you know it, I was trying to build and paint them too.

How did you get into airbrushing?
I got into airbrushing when I was 13 years old. Jose, another cousin of mine, gave me an airbrush and I didn’t have the slightest clue what it was. He tried to explain to me how it worked but he didn’t know how to use it himself. We ended up referring to the instruction pamphlet on how to use it which came with the airbrush.

Who influenced you?
My cousins Manny and Jose influenced me the most. I remember years before airbrushing, Jose used to paint T-shirts with a brush and used enamels on the shirts.

What type of materials were you using?
I used anything I could get my hands on-from brushes to airbrushes and from paper to pieces of metal. It really didn’t matter as long as I had paint.

You told us that you did not have an air compressor so what did you use?
When I got my first airbrush, my problem was getting my air source. I was a 13-year-old kid and I couldn’t afford to buy a can of air that cost 10 dollars at the time so I used an old tire that I had in my backyard. I had to fill the tire about 10 times a day, back and forth to the gas station. Eventually, I was able to save enough money to buy a small compressor-it was a very special day for me. I was finally able to finish a project in one day.

In the beginning of your career, what artist(s) did you admire and why?
The artists I admired were Frank Frazetta, Boris Vallejo and Simon Bisley just to name a few.

How about now?
After going to school and learning more about the artists, I would say Salvador Dali and still, Frank Frazetta and Sorayama.

How did you get into airbrushing cars?
I started with model cars, then T-shirts and leather jackets, wall murals and eventually, automotive. Whatever they asked me to paint it didn’t matter to me. My work started getting recognized at car shows and it took off from there.

Did you go to school to learn about art?
Yes, I did. After so many years and traveling in South America I decided to get formal training at East Los Angeles College. It was the best investment of my life. I also went to Los Angeles Trade Tech College to study sign graphics. By going to these colleges my art has improved drastically and so has my income.

What type of community activities are you involved in?I try to stay involved with the community to help as much as I can-from helping to feed the homeless with SASA (Students Against Substance Abuse at E.L.A.C.) to doing volunteer work for the community.

Why do you do them?
Well, when I was growing up in the neighborhood, I got a lot of help from people I didn’t know so it’s my way of giving back to people that need help. I want to set an example that by working together we can make a difference.

Tell us about the Latin Art Show?
The Latin Art Show began as a regular art show with a few cars and a few artists. Next thing you know, more artists started participating in it and it snowballed to about fifty or more artists wanting to participate. Unfortunately, I had to tell them there was no more room and to wait until next year. I hate the fact that I had to turn them down, but it was the space and the money that would then become an issue. It is not an easy thing putting an art show together with a small budget. I’m trying to work with the city to help me with this problem, but the city is doing everything they can do to help. I know things will get better by working with sponsors so that everyone can participate and make it into a big art festival.

What do you recommend for someone starting to airbrush?
Be patient and take your time. Try to get as much information about airbrushing as you can. There are also video how-tos that are available on airbrushing. You can check with your local paint store or look it up on the web. Last but not least, take art classes-painting, drawing, and draw everyday if you can.

Where can people see more of your work?
At myspace.com/airbrushrick, or by email,
airbrushrick@gmail.com.

Any last words?
Chase your dreams, think positive and stay focused because you only live once. Like the old saying: “The saddest thing in life is wasted talent.”