Newsletter
Sign Up today for our FREE Newsletter and get the latest articles and news delivered right to your inbox.
Home » LRB Model History 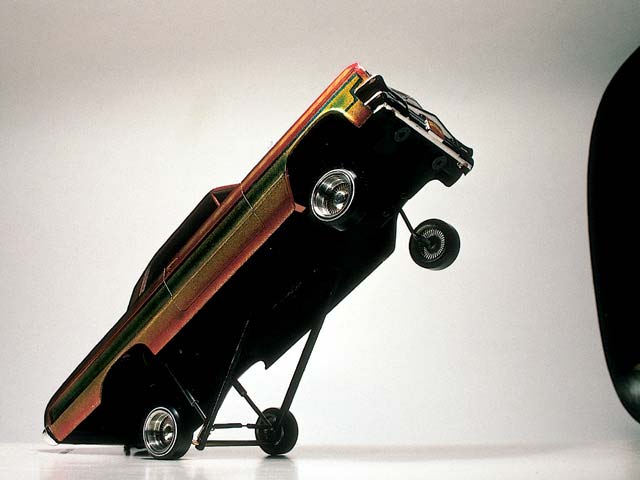 At first, many readers of Lowrider Magazine envisioned a new magazine called Lowrider Bicycle that would showcase the sport’s best lowrider bikes and model cars to be a comical yet perfect match, while outsiders thought that the subject mix was a bit extreme. “I don’t get it,” some said. Ha! It didn’t take long and we showed them (in October ’93, the month that the magazine premiered) that model cars have ideal coolness, creativity, color, detail and, above all, imagination.

The publisher (and my boss) at the time, Alberto Lopez, was happy to see such excitement happening in the lowrider market and gave us the green light to shoot model cars for four issues a year in 1994. Later, we hit six awesome issues a year, but at that deadline rate this editor was getting a bit weary. Ultimately, the economy of the business tapped the magazine’s frequency, leaving many readers to wonder why they cannot find it in their favorite stores. Although LRB first started out with four issues, then increased to six, and then back to four, it is now a bi-annual special issue still tasked with covering selected events.

Soon enough after publishing began on Lowrider Bicycle, we discovered a trilogy of major model car shows through a very charismatic and professional modeler named Alan Gonick, along with some other pioneering modelers who both made friends and rivalries. Among the very first modelers that we featured were Mario Briseno and his buddy Rodney Barraza from Northern California. These guys helped ignite the passion for plastic lowrider model cars. Also in 1994, another very influential modeler came upon the scene. Armando Flores brought fine detail and metal-machined aluminum rims to model cars and here again his detailing techniques only served to motivate other soon-to-be top modelers. Jarvis Malone from down in San Diego, California, produced at least 100 models when we featured him.

And at about that time there were three Southern California major model car shows that we regularly attended: the Southern California Classic Model Car Show (Ontario), the Lower Left Coast Model Car Contest (San Diego) and the Cactus Classic (Victorville). For years, we covered these three shows, as well as smaller model shows from all across the United States, though most of the coverage was West Coast material, such as Morris Models . That swapmeet and several other lowrider model shops in Los Angeles–like the hip-hop clothing store Down Low Hook-Ups, the infamous G&S Hydraulics (where all of the model car “gangsters” hung out and a lot of those cars really reflected the neighborhood’s wild styles) and Respect Hydraulics–produced tons of cool model cars and even quite a few hopping hydraulic cars, too.

At least three other gentlemen made their mark in the plastic 1/25-scale model car scene. Gary Seeds, David Anthony Garcia and Carlos Avelar. Gary was famous for his painting techniques and model master David (who works on real custom cars) has produced some extremely amazing model cars that appeared in LRB. Maybe his most famous model was an exquisite replica of Lifestyle Car Club member Joe Ray’s ’79 Lincoln Continental, “Las Vegas.” Another highly talented modeler that we featured was Carlos, who was much known for his extreme detail and the building of real car replicas, too. Ah, but he wasn’t alone.

Still other guys have captured their 15 minutes of fame and made the A list in LRB. Some who come to mind are pros like Hector Lozano, the late James Bonsell, Josue Gonzalez, Mark Vargas, Albert Galaviz, Ralph Ramirez and, of course, we cannot fail to mention famed pro modeler Mike Tellez, who ventured into the scene circa 1999 and and in turn helped LRB out with some high-quality technical articles. Kurt Barlow was another top modeler whose work we published, as well as Anthony Arebalo, Eddie Soler, Roger Chavez, Freddie San Miguel, Alfred Grijalva, Erik DeGrate, Gilbert Chavarria, Miguel Murrillo and Joe Mejia.

The modelers above are dedicated and talented hobbyists who have left lasting impressions on the editors and the sport overall. These guys were the glue that helped solidify the now officially recognized lowrider model car industry. In short, they have indeed made history throughout the magazine’s 10-year lifespan. We express our gratitude towards any and all persons who have lent us a hand during the magazine’s many changes. Without these fellas, the decade-long history of Lowrider Bicycle Magazine would not have been the same.