Newsletter
Sign Up today for our FREE Newsletter and get the latest articles and news delivered right to your inbox.
Home » Lowrider Bicycle History 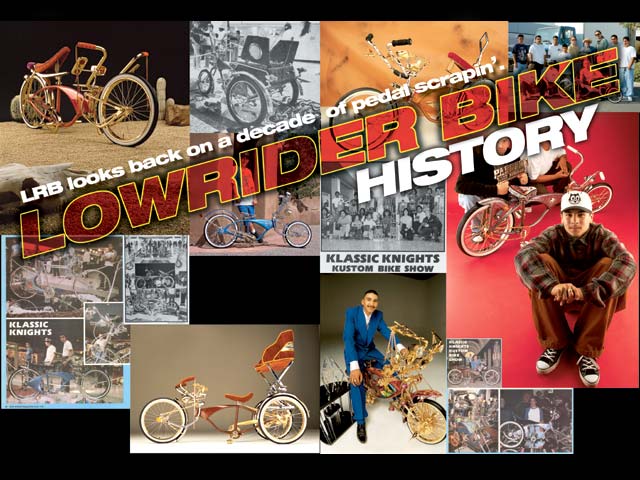 Lowrider bikes have been around for years, although nobody has ever really pinpointed when the actual first lowrider bike hit the boulevard. Maybe the closest thing that has ever been documented was the Eddie Munster bike from the ’60s TV show The Munsters, a George Barris-customized Schwinn Sting-Ray. The Sting-Ray has been the bike of choice for most lowrider bike builders ever since its introduction in the ’60s. The popularity of the Schwinn and similar bikes remained strong throughout the ’70s. In the mid ’80s, however, Sting-Rays seemed to go into hibernation as BMX and freestyle bikes seem to be the direction that all bike manufacturers and enthusiasts took.

Even though Schwinn and other manufacturers had discontinued their cantilever frames and started specializing in BMX bikes, there was still a market for the old classics. When Lowrider Magazine busted back out in 1988, people started to build cars as well as bikes. There were a few bikes still out there during this hibernation period, but they were cruisers and not show bikes. Slowly but surely, classic Sting-Rays started to become more and more popular. By the beginning of the ’90s, the competition started to become intense. As a result, the old Schwinns became far more scarce as well as more expensive.

The results of this revamped style left the doors open for then Lowrider Magazine Publisher Alberto Lopez, who invested time and money to rejuvenate the classic bikes. After several months of investigation, Alberto was not able to buy the Schwinn rights, so he was left to built something similar. This was the birth of the “Aztlan Cruiser” and also the start of Lowrider Bicycle, Inc., which would cater to all lowrider bike needs.

Thus began the tale of Lowrider Bicycle Magazine. Back in 1993 , Saul Vargas, brother Rene, and cousins Hector and “Yoyo” were on their way to a car show when they stopped at a local 7-Eleven to buy sodas and food for the high school show. At the newsstand, Saul was looking for Lowrider and other related magazines. The result from his scavenger hunt was a new magazine that stood out from the rest of the pack. Saul’s eyes opened up and his mouth dropped as he picked up the first issue of Lowrider Bicycle Magazine. Hey, guys, check this out, and they all said, “It’s about @$%#&*^% time. Hey, is this for real? Are we going to have our own magazine to read? A magazine dedicated to lowrider bicycles and model cars?” The answer was yes. At that time, Saul set a new goal, not just to be in Lowrider, but to have one of his pedal-scrapers featured in this new magazine.

As the years progressed, Saul kept going to shows where Nathan Trujillo and the LRM staff finally started noticing his work and soon we started seeing little pictures in the magazine. Little did he know that he was on his way to getting a full feature in the magazine as well as getting a job with the magazine. While competing on the show circuit, Saul got to meet many people and got to become friends with many in the lowriding community. This made it easier to see who was contributing to the lowrider cause and who would be the new trendsetters.

One of the first trendsetters was the infamous “Claim Jumper,” owned by Danny Galvez, Jr. of Los Angeles, California. As the first cover bike for LRB, it made history as it was on the debut Winter ’93 issue. This original creation elevated the standards of quality for lowrider bikes across the nation. Danny’s custom flavor was also emulated as everyone started slamming their bikes by bending their forks as radically as possible to give the bikes that old school flavor. The Claim Jumper’s show turntable design is still in use to this day, as people keep them as compact as possible. The now almost standard chrome and gold seat pans were introduced by the Danny’s two-wheel scraper.

The biggest contribution of all was that this bike was the first bike that Warren Wong had worked on. Warren worked with BMX and freestyle bikes, but his desire to be different revolutionized the industry, and he eventually became the “Wheel King.” Warren’s first set of wheels were straight-laced, but he soon followed those with his “Body Count” clover-laced design. These were his first lowrider wheels, which would later evolve and be duplicated by many.

Next to make history would be the first Lowrider Bike of the Year, “Gold Rush,” owned by Chava Hernandez of Oxnard, California. Like the real-life event that it was named after, this bike caused many others to want to strike it rich in the now glittering sport of lowrider bicycles. The first people to be featured on the cover were members of Passion Bike Club of Los Angeles, California. Originally shot for the premiere issue, this cover was held back. The stretched-out two-wheeler owned by Kevin Johnson would earn their club recognition as among the first quality bike builders. Early issues of LRB also earned attention from MTV producers, who worked together with LRB to document some “awareness” commercials. This national exposure would only help the lowrider bike boom even more.

With the Fall ’94 issue, Saul became a part of the LRB staff; first as a contributor and then as Technical Editor. With his bike background and all-around mechanical ability, Saul quickly established himself as a writer and an up-and-coming photographer in the company. With nothing but two-wheel bikes on early covers, it was time to have a three-wheeler on the cover. The first trike to make such history was Gilberto Luque’s “Gold Magic II” ’69 Schwinn from Santa Fe Springs, California, in the March/April ’95 issue. The issue featuring Gilbert’s Sweet Kolors Bike Club trike also made history as it was the first bi-monthly issue of LRB.

Although California was the hub of lowriding and the source for all of the early covers, eventually the lowrider bike craze spread to other States and everybody began wondering what would be the first out of state cover bike. The answer was Patrick Torrez of Silver City, New Mexico, with his ’69 Huffy dubbed “Smile Now, Cry Later”in July/August ’95. Another trailblazer would be Kainoa Piscusa of Hawaii as we featured his candy-painted “Tribute to the Gods” ’77 Sting-Ray on the cover in March/April ’96.

Also in ’96, Kodak launched a commercial campaign for their Advantage camera systems, which focused on lifestyle. Rene Vargas and his “Gangster Madness” bike from the November/December ’95 issue was one of the first lowrider bikes to be featured in a nation-wide commercial, which debuted during the ’96 Summer Olympics. This was the beginning for more usage of lowrider bikes in commercials, as the industry loved the lifestyle involved with the bikes and wanted to capitalize on the hot youth trend.

The Lone Star State of Texas would be the first cover shot by Saul instead of Nathan. The bicycle would be “Space Age Cruiser” owned by Freddy Velasquez of Houston, Texas. The newly confident Saul then jumped on a plane to Arizona where he shot Julian Cons’ “Fire Dragon,” soon to be the first Arizona cover bike. Lowrider Bicycle was doing well and the proof was in the quality of bikes that we were featuring.

In the Winter ’99 issue, Mike Lopez, Jr. became the first and only Lowrider Bike of the Year Champion to win four consecutive titles with his “Casino Dreamin’.” After retiring, Mike was hooked up with promoters who flew him to Europe to display his bike in a cultural exhibition. After being contacted by Sprite soft drinks, LRB hooked Mike and his club, Finest Kreations, up as they did a full feature commercial focusing on the youth of lowriding.

After Mike retired, the doors were wide open for the next big bike guy to step up. The first to do so was Pete Moreno III of Houston with his ’75 Schwinn pedal-scraper, “Wolverine.” The next Bike of the Year title was earned by Angus West (and his dad, John) with their latest creation, “Spawn.” The San Francisco, California, residents held the title back to back and are still currently the Bike of the Year champions.

After years of pushing, we finally had a Trike of the Year title when “The Crow” of Houston became the first Lowrider Trike of the Year. The following year, the trike title would go to Randy Beard of La Mirada, California, with his modified “Knight’s Quest” ’67 Sting-Ray. Randy would be the first to dominate the circuit for two years back to back. The three-wheel torch was then passed to Freddy Madrigal with his “Living Legend.” The following year, Freddy was not able to defend his title and it was won hands down by Texan Jesse Prado of Rollerz Only with his trike dubbed “All Rolled Up.” Jesse is the reigning Trike of the Year champion.

Lowrider bike history goes back years before LRB, but we wanted to show you a few images courtesy of Armando Avila, who took the time to scan some images from his own collection. With this in mind we want to thank everyone for helping us out during the past 10 years. As we always say, “Without you, there is no us.” We hope that you enjoy our anniversary issue. Peace!