Newsletter
Sign Up today for our FREE Newsletter and get the latest articles and news delivered right to your inbox.
Home » The Mad Bomber 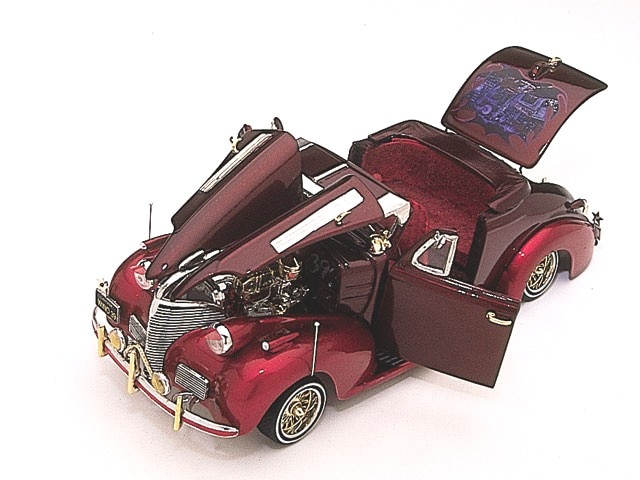 Another day passes by and Henry Espinoza of Huntington Park, California, is planning another bomb attack on the competition. Henry’s weapons are candy paint-covered, fuzzy fur-filled plastic bombs. Henry has been building models for a few years now and has come a long way.

For instance, Henry built a ’39 Chevy called “Wino ’39” that shows off all of his talents. Henry’s first move was to remove the top on the ’39 and then making the hood, doors and trunk open up in the proper way. Henry then laid out custom brandywine paint throughout the bomb. He then waited a few hours before adding some pinstriping and a mural on the trunk. Using burgundy fuzzy fur, Henry laid down a sweet interior scheme, taking the idea all the way to the trunk where Henry added miniature pumps, dumps, batteries and speakers to give the trunk the full lowrider effect.

Henry’s ’39 was ready to take on all comers, but Henry noticed that his engine wasn’t tricked out and he knew that his competition would take advantage of this weakness. So off Henry went buying everything that he needed for his next objective. Taking out his handy microscope and tweezers, Henry proceeded to get down on the detailing portion of the engine bay. Henry’s ride took on a life of its own. Henry finished it off with a cool set of wire wheels.

With the ’39 done, Henry thought to himself that he needed another project to eliminate every aspect of competition. So back he went to the drawing board, brewing up another bomb to set off on all of his nemeses. Henry picked a ’50 Chevy pickup to deliver the payload. Henry jumped on the building process like it was second nature, taking his X-acto knife and cutting away at the doors to make them work properly. All of the body modifications were small and not on the level of brain surgery. Handy Henry handcrafted a homemade sunvisor from scratch to give the truck some cool shade for those hot model days (or in case that Editor Nathan Trujillo would apply so much heat from intense lighting to his models when shooting them that they would warp or melt).

Using his favorite side order (avocado) as the color of his car, Henry took out his handy air gun and sprayed away, leaving it so “avacadoey” that you’re tempted to dip tortilla chips into it. The paint cured in a matter of hours and Henry jumped on the bed of the truck. Wanting to make it realistic, Henry used real wood for the floor and side rails, giving it the sweetest look ever. Henry finished the outside cosmetics with a pair of skirts.

With the outside done, Henry had to dive into the engine compartment to make it look as good as the exterior. Taking his time, Henry detailed it to the best of his potential. On a scale of one to 10, Henry scored 11. So happy was he with the results that he decided to do the cab of the truck as well. Using tan fuzzy fur, Henry gave the interior an OG look. All that he had to do now was add “Gangster” whitewalls and cross bar hubcaps, making it fully loaded and super deadly.

Henry also has a number of other explosive rides in his arsenal, like his candy midnight blue ’48 Chevy panel, a dark candy purple ’37 Chevy coupe and a cool ’48 Ford woody. Henry doesn’t want to be known just for bombs, though. He also wants to be known for his lowrider building skills. Before the kit was even out, Henry bought a ’60 Chevy Impala resin kit, added skirts and candied it purple. Henry probably had the first ’64 Impala wagon, a detailed-out metallic blue masterpiece with a white top. Henry had one more trick up his sleeve, a cool ‘57 Chevy Bel Air Nomad, candied in green and with a white top.

All of Henry’s supplies came from OG Hobbies and a few other local SoCal shops. Henry incorporates ideas from a number of sources, including his buddy David Anthony Garcia, into his models. Like we said, Henry has come a long way from when he started. He takes his time building his rides, as you can tell when you see his models in person. If you get the chance, check out Henry’s bomb models at a Southern California model show. Unlike the competition, you won’t be disappointed.