Newsletter
Sign Up today for our FREE Newsletter and get the latest articles and news delivered right to your inbox.
Home » One1Luv Car Club – One1Luv’s Journey 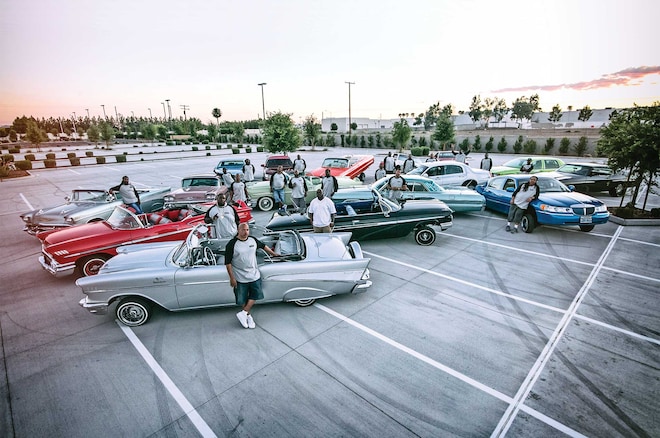 What happens in Vegas starts with One1Luv Car Club. This club’s history started back in the late ’70s when President Jim Brown sat in third grade drawing pictures of the neighborhood lowrider club Ebony Lows. “These guys were the local celebrities,” Jim says. “They had such an influence on us that my friends Tyrell, Mike, and I began building model cars and lowrider bikes.” It wasn’t until 1987 when Big Jim tricked his mom into buying a supposed reliable car for college that his lowrider journey really began. Unbeknownst to his mom, what she really ended up buying was an ’80 Cutlass Supreme, complete with a front-back-side-to-side hydraulic setup.

After the Rodney Kings riots, Las Vegas found itself in a time of unprecedented peace among once-feuding neighborhoods. This peacetime would lead to block parties where once rival gangs and riders forged new friendships, which would eventually turn into new car clubs, like Darkside Car Club, which held a dynamic membership from Gerson Park, Marcus Estates, and Berkley Square. While this club enjoyed several years on top of the Las Vegas car scene, its rapid growth would be its ensuing downfall. While some of the displaced members enjoyed the courtship of the larger, more established, Los Angeles clubs, a meeting held in the States would eventually bring everyone together under the newly formed One1Luv Car Club, setting an unbreakable foundation that still remains in 2015. Learning from the now-debunked Darkside, Jim Brown was thrust into the role of president, with Marcus Allen as senior vice president and “One Switch” Rick as vice president. They would go on to establish rules and regulations that still remain to this day.

Within a few short years One1Luv began beating some of the nation’s top contenders, making a statement throughout the lowrider scene. “With hard work, focus, and dedication we soon began gracing magazines covers and appearing in music videos with some of the industry’s top entertainers,” Jim says. “And although we are humbled by these accolades, it’s our involvement within our community that we are most proud of.” Networking with local politicians and focusing on the youth has led to recognition from former Las Vegas mayor Oscar Goodman for their endless hours of volunteering in events such as back-to-school drives, homeless youth outreach, parades, and holiday events that help change the lives of their community’s youth.

Coming up on their 20th anniversary, they are more focused than ever and continue to grow with the addition of their motorcycle club, clubhouse, as well as chapters in Oklahoma, Utah, and New Mexico. Their members have also grown, turning a hobby into a flourishing businesses like TKO Customs, Switch Hitter Hydraulics, Dream Factory Films, tax services, barber shops, and much more. The sky is the limit with these guys and with new cars busting out on a monthly basis, don’t forget that what happens in Vegas will be coming to a car show near you.