Newsletter
Sign Up today for our FREE Newsletter and get the latest articles and news delivered right to your inbox.
Home » Impalas Car Club San Jose Chapter Anniversary 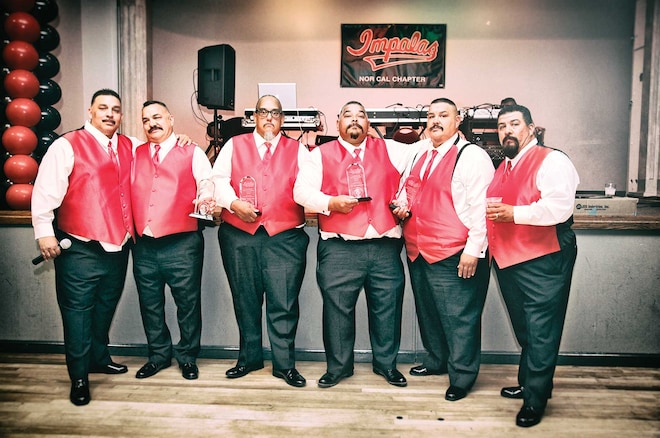 Robbie, Kiki, Sonny, and Bubba were high school friends who started the club in 1990. “We all had Impala cars and decided to start a club called Impalas. We used to only allow ’58-’70s but we have now opened it up to all years and styles,” Robbie explains. By 1995, Impalas had opened up a Central Coast and Sacramento chapter. Since then the club has opened a chapter in almost every city in Northern California as well as expanding out in Nevada, SoCal, Arizona, Kentucky, Texas, New Mexico, Colorado, Oregon, and other states.

On September 5, 2015, the Impalas San Jose chapter (aka the mother chapter) celebrated their silver anniversary at the S.E.S. Hall in Santa Clara, California. Wearing Impalas Car Club traditional black and red colors, guest from 20 other chapters began arriving at 5 p.m. Following the chicken and tri-tip dinner was the award ceremony. Doug Manville, David Rodriguez, Ed Cevedia, Matt Dearcos, Felipe Pacheco, and Sal Herrera were all recognized for their 20 years of dedication to the club. A set of Zenith Wire Wheels and a two-pump chrome setup was raffled off before everyone hit the dance floor with the live band.

We’d like to thank and congratulate the Impalas Car Club and their chapters for the continued support and we wish them continued success with their family tradition.