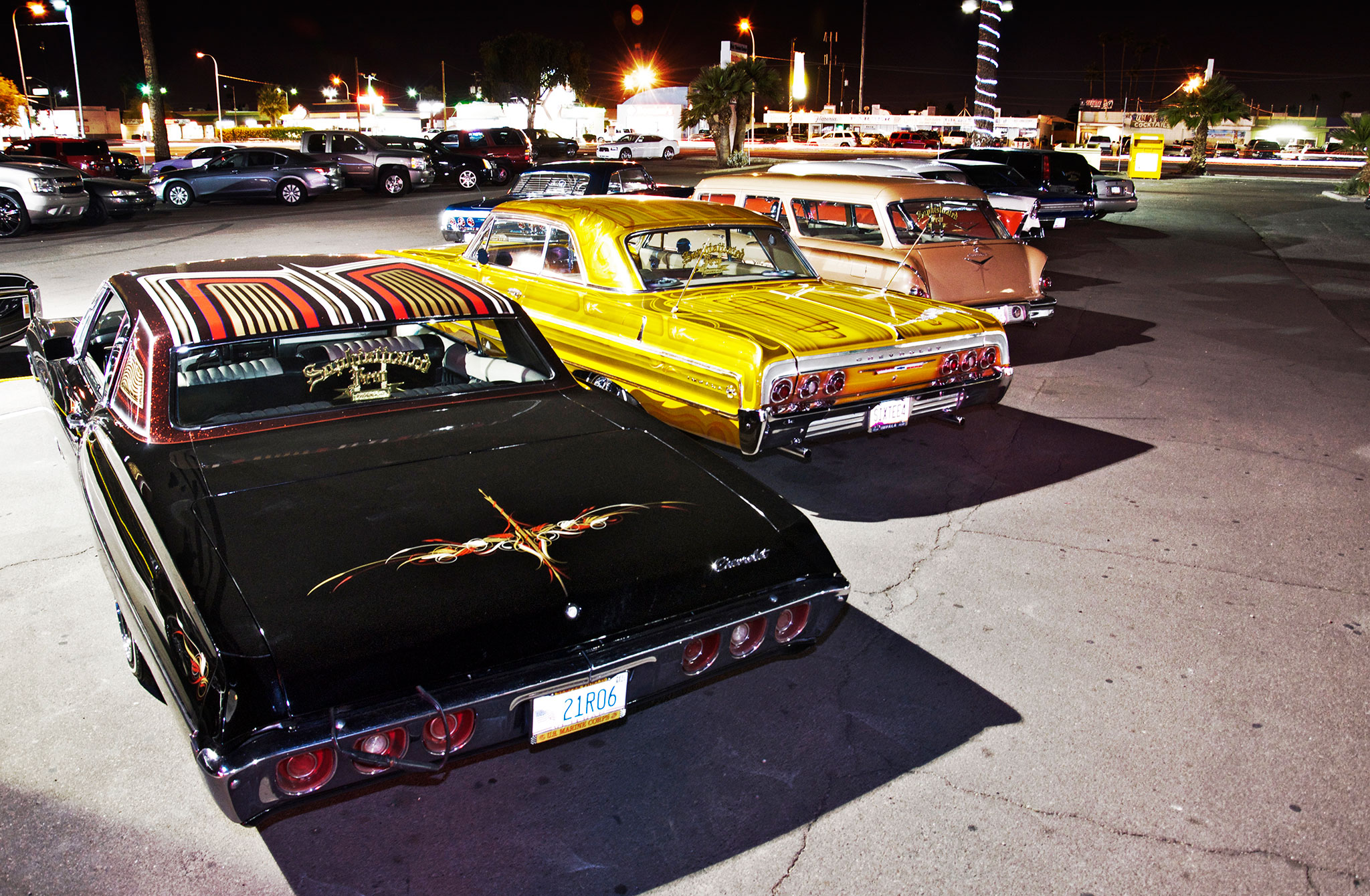 Forty years ago, the Arizona version of Boulevard Nights was cruising Central Avenue in South Phoenix. Central ran from O’Keeffe’s Hamburger Stand where hoppers would challenge each other to Southern Ave where the rides would make the turn back for the cruise back up. Some went to meet girls, and some went to meet guys, but all went to see the latest break-out rides cruising Central.

Whether you were showing off your newest paintjob, hitting switches with hot batteries, or just turning up your Mind Blower speakers, it was American Graffiti with a Chicano flavor. A few friends that seemed to hit it off right away while cruising were the Moreno brothers Manuel, Gabriel, Tony, and friends JR Garcia, Peter Lopez, Bobby Gonzalez, Gilbert, and Tony Leon. They decided their group could make a difference in Phoenix lowriding, so they organized their group to start a car club.

Now back in the mid ’70s, formalized lowrider car clubs were somewhat rare in Phoenix. In fact, as a reference, The Dukes, the world’s oldest Lowrider car club was still in their teens as an established group and The Imperials had just celebrated their first decade of lowriding as a club. Today, those two organizations have a combined century of history in lowriding. For Arizona, lowrider car clubbing was very new and exciting and up to that point, you could count car clubs on one hand.

Once Manuel put their first meeting together, one of the club’s first calls to action was creating a name that best represented them. Manuel Moreno took the lead of being the club’s first president. And what does a good president do when it’s time for tough decisions? Do what I do: get a recommendation from the wife. Manuel’s wife Cindy was credited for the new name that would eventually become their brand for over 40 years. Thus, The Sophisticated Few Car Club was named.

The club was destined to become part of the Arizona lowrider landscape, and after a very successful startup in Phoenix, additional chapters opened in Tucson, Eloy, and Casa Grande. The club also opened chapters in Farmington, New Mexico, and recently Inland Empire, Califas. The Phoenix Chapter started it all. And though not everyone stood put, the lowrider legends who once flew this plaque reach near and far. The Few’s hoppers and hydraulic Houdinis are still recognized today as industry masters of their craft.

Efrian Gonzalez from the Legendary Reds Hydraulics Dynasty, Frank Castillo of Frank’s Custom Hydraulics, and now father-and-son team Manuel Moreno all shared ranks in the club at one time. The club also was known to have a few builders who would later become very well known in local and national lowrider circles. One of the first mini-truck legends, then called the California Raisin and later transformed to Lowrider Truck of the Year “Wrapped with Envy,” Derrick Jhagroo started up his lowrider career in The Few. So did Big Mando and DeeDee from Mando’s Custom Paint and Upholstery which were responsible for customizing countless Arizona lowriders, mini-trucks, and more!

The club saw its fair share of presidents. After Manuel moved to California, Peter Lopez became president. And following Peter was Sal Gonzalez. The Few’s best days were in the ’80s and early ’90s in Phoenix. Their flagship show where their lineups would exceed 40 strong was at the Phoenix Civic Plaza. This is where Johnny Lozoya’s “Super Events International” Supershows were held. This was the climax show for Arizona where lowriders were showcased inside the air-conditioned Civic Plaza Convention Center in downtown Phoenix. The show also pulled in clubs from California, Texas, and New Mexico. The Sophisticated Few’s lineup allowed an Arizona-based car club to compete against the clubs that traveled to reap the rewards of a Supershow. The club has stayed active in showing up to every Lowrider Magazine Supershow in Arizona from Firebird Lake in 1979 until this year’s Arizona Supershow held at the University of Phoenix Stadium.

The Few is also active in neighborhood outreach. The club often participates in fundraisers in helping communities it has ties to. The club co-sponsors a Christmas Toys for Tots event with other car clubs in Phoenix and their generosity is genuine in helping secure the Christmas spirit for many children who partake in receiving a Christmas meal, presents, goodies, and a visit from Santa Claus, of course cruising in with his lowrider sled. Earlier this year the club held their 40th anniversary party at Club 602 in Phoenix. All chapters and past members were invited to reminisce and celebrate 40 years of living the lowrider lifestyle.

In 40 years of lowriding, The Sophisticated Few can say they have almost seen it all. The cycle of membership has evolved as well. But some of the past has once again recreated a future for this club. Like Sal Gonzalez who was club president for a good portion of the club’s mainstream history. Sal bowed out years back, but recently took the reigns again in returning as president of the mother chapter. Sal was part of the slow times, and the fast times, good and bad, easy and hard, big and small. But he and his club have a determination that doesn’t allow them to stop. In fact, if you talk to any members today, they will tell you, ain’t no stopping us now!