Newsletter
Sign Up today for our FREE Newsletter and get the latest articles and news delivered right to your inbox.
Home » Efrain “Bugs” Gonzales – Bugs Auto Art – Lowrider Original 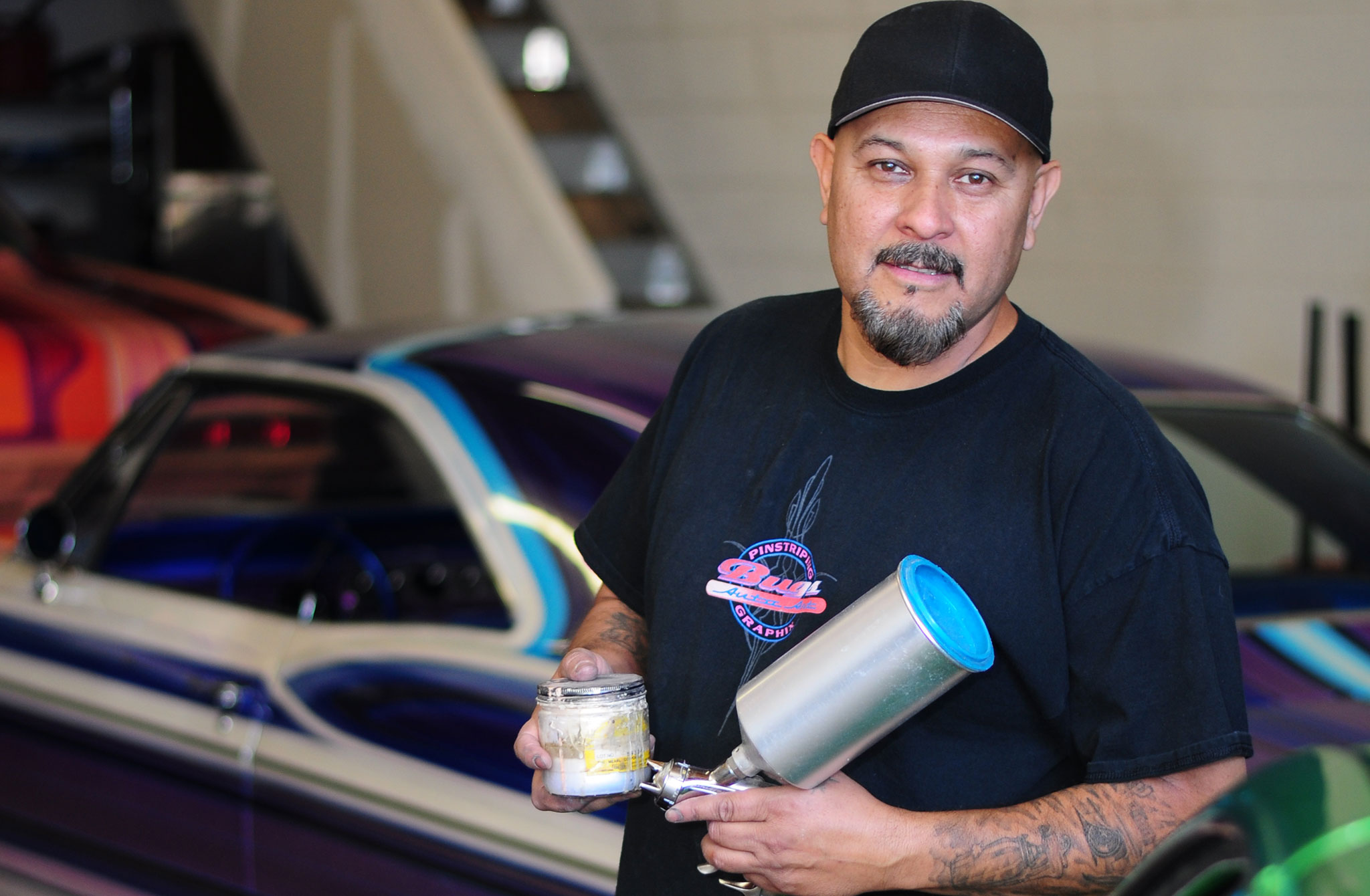 The first time I met Efrain “Bugs” Gonzales, he was in his teens and determined to learn about lowriding. Loving cars since he can remember, Efrain recalls his first experience in elementary school checking out his first book at the school library on dragsters. He loved the sound of a healthy engine and the graphics and lettering painted on the rail grabbed his attention first hand. Luckily for all of us, he eventually fell in love with the long sleek lines of lowered steel and left the need for speed.

As Efrain grew up, he needed to make some serious decisions as a young man. The south side streets of Mesa, Arizona, were not that innocent and Efrain had to decide whether he would follow the crazies forever or follow his mom’s heart in wanting the best for her son. The outcome is evident, but he did experience some harsh lessons that made him wiser and allowed him to grow as a man.

He cut his first lowrider tooth joining Society Car Club of Mesa, which was a newly formed club with a family-first atmosphere. At the time, he and one of his good friends Danny Ochoa were building their first rides. Both owning ’64 Impalas, Danny went original and Efrain went low and custom with his. Efrain loved to draw and often showed his talents on a drawing tablet. Once he mastered his freestyle designs on paper, he progressed to car parts and finally pinstriped his first projects, which cruised the streets of Mesa. This was the beginning of a long and strong friendship with a pinstriping brush and a toolbox full of “One Shot” enamel paints that would soon produce a master craftsman.

Though Efrain was brought up in Mesa, he was born in Idaho, and as many Hispanic families did, migrated along with the work to be done. Efrain’s mother, Carmen Emma Gonzales, was a single parent raising her family as best she could. As the oldest, Efrain became a father figure with his siblings: sisters Leaticia, Maria, Ninfa, and brother Ugo. His mother did a great job in providing for her children, putting God in her children’s lives, and showing the special unconditional love Efrain keeps in his heart and mirrors with his family today.

Once Efrain established himself as a car-building artist, his talent became a highly desired commodity, and his nickname “Bugs” became his trademark name with all who knew his work. We all grow as people, and once Bugs experienced the Phoenix lowrider scene, he wanted to try bigger things. He became good friends with Sophisticated Few Car Club President Sal Gonzales. He got to know them well and eventually joined that car club, which at the time was in its mini-truck era of lowriding. His mini truck did well in the show circuit and was a rolling billboard exposing his work.

Once the shine of clubbing wore off, he decided to go it solo and dedicate his time in further developing his talents. Bug’s self determination provided him opportunities in going to a graphic design school in Southern California. There he joined friends and other well-known artists Cartoon and O.G. Able. Bugs would later join the Lifestyle Car Club in Los Angeles and help paint and stripe most of their cars.

As time went on, Bugs’ talent flourished as he saw the different styles of artwork and striping performed on all kinds of different custom cars in So Cal. God blessed Efrain with many talents besides lettering, striping, and custom painting. He also gave him the talent of being a humble and appreciative person who is also well liked for his counseling of the many friends and customers he has had over the years. It can be said that Bugs is a loving dad, husband, family member, and friend and that by itself is his best artwork.