Newsletter
Sign Up today for our FREE Newsletter and get the latest articles and news delivered right to your inbox.
Home » Imperials Car Club – Lowrider Car Club Profile 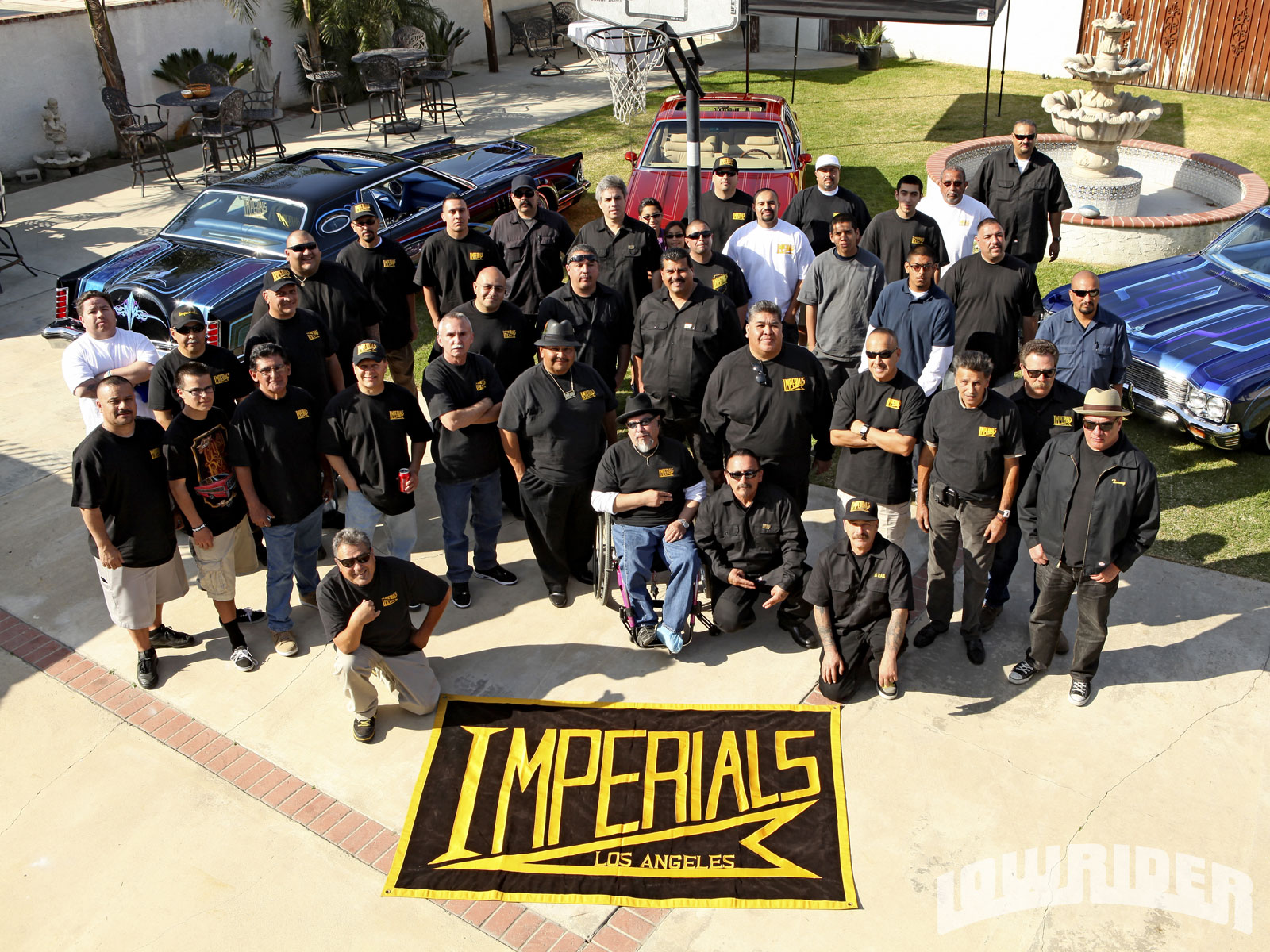 One of the biggest assets to any car club’s longevity is their foundation. Over a period of years, members and cars may come and go, but it is the core mission of the club that will dictate their success and legacy. Enter The Imperials car club, one of the oldest, most famous and most respected car clubs in our culture. The club, whose roots took hold in East L.A., has had a lot of ups and downs, but thanks to their resolve, they have managed to hold onto their standards throughout the years. In an effort to better tell their story, the club was kind enough to invite us over for a barbeque and drinks. After we had finished eating, I got the chance to sit down with a few of the old school Imperials members and talk about the club’s history. Imagine a roundtable of Lowrider veterans waxing fondly about the long road they’ve travelled and you’d have our night in a nutshell. It was exciting, interesting, and most of all informative − and this is what they had to say.

“I got in to Imperials because of two friends of mine named Manuel Camero and Richard Perez” says Raul Hoyo, the oldest member sitting at the table. “The club was the same back in the ‘70’s, the only difference was that back then we would meet up every Thursday and Friday, we would have a party every Saturday and we would meet up at church every Sunday,” says Raul with a smile. Not wanting to grow out of control, the club had set the limit of how many members could join the club at fifty. Any more than that meant a threat to their core values and the club was not about to lose sight of their pure passion for Lowriding. “Coming out of high school in 1974, I was looking to join a car club,” remembers Tommy Ramos. “Some of the clubs that I was looking to join included the Bachelor’s LTD, Group, and New Life. Then a guy named Tony told me that if I wanted to join the baddest club in East L.A., I had to join the Imperials.” Tommy, who was eighteen at the time, went to an Imperials party and met Jesse Valadez. “I talked to him for about an hour and he was so respectful and had so much class that I decided to join the club right then and there,” Tommy says with pride.

As the night went on, the club members began discussing the club’s keys to success, and these are values that the club continues to adhere to today. “We have two unwritten rules in the club,” says longtime member Moses. “Family comes first and the second rule is that the quality of the member comes before the quality of his car. Jesse himself told me that, and we have always maintained that belief and plan to carry it on for the future.” Another key to success was the aforementioned low membership limit, which helped the club to maintain its identity without growing out of control. “We didn’t have as many members as other car clubs, in part because we had a really strict car committee that would check every car,” adds longtime member Lencho. “We considered it a real privilege to be able to fly the Imperials plaque because of the rules we had, so you really had to be a person of good character to get into the club.”

Simply put, the Imperials car club is a true Lowrider club. Beyond the glamour and notoriety of longstanding car clubs, this club is one that is all about the passion for creating the perfect custom car to cruise on a Saturday night. “We don’t Lowride to outdo other clubs; we Lowride because we love to Lowride,” explains Tony Suarez. This ethos has made this club stand out for 45 years because the purity of their passion is on display at all times, and members old and new hold steadfast in their beliefs. The Imperials are a club that simply loves doing what they do. Even the loss of former members cannot stop this determined club. “Jesse Valadez was the heart and soul of the Imperials car club and he will always be,” says Moses. “His legacy will always live on through all of us.” His leadership will surely be missed, but it will not be forgotten. “When you think of the Imperials car club, nobody can really say anything negative about us and a lot of that has to do with Jesse,” explains Arnold Ontes. “I remember after one car show he had us pick up our mess and when we were getting ready to leave, he would say to pick up everyone’s mess because that would reflect on us.”

The ability to hold themselves to the highest standard has always been the biggest strength of this legendary car club. With a secure foundation and a passion for true Lowriding, it’s safe to say that this club will be around for another four decades.