Newsletter
Sign Up today for our FREE Newsletter and get the latest articles and news delivered right to your inbox.
Home » Oldies Car Club 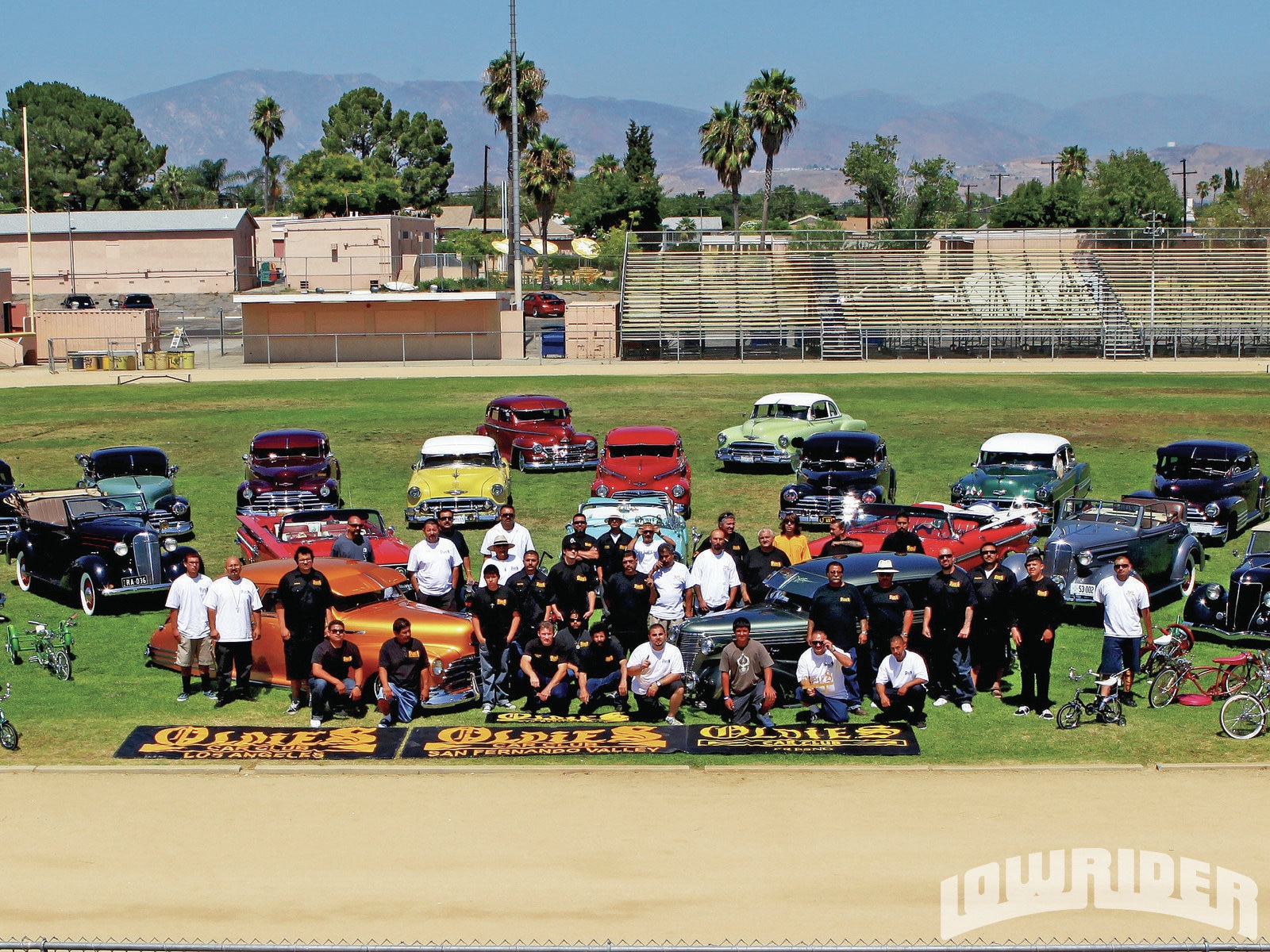 The mid-1970’s can be considered the golden era of the Lowrider scene. It was a glorious time in which parks throughout California would be brimming with Lowrider activity, and picnics would be filled with the sights of chrome and custom paint. As the sun set, these park attendees would trade the green lawns and picnic parking lots for the backdrop of the Boulevard, scraping pavement until the wee hours of the morning. This booming time period also saw the formation of many Lowrider car clubs, some of whom are still around to this very day. One of those few surviving clubs is Oldies Car Club, a club that has endured for nearly four decades!

The idea of forming this unique car club took shape in the summer of 1975, in a shipping yard in San Diego, CA. While on their lunch break at the shipping yard, three friends came up with an idea to start up a car club that only consisted of older makes. The first step they took in forming the club was to design a flyer that read, “If you like and have an old car and want to start a club, please attend the meeting which will be held in the evening on July 10th at Chicano Park.” The flyer was passed around to friends, family members, and anyone the three men came across, making its rounds all over the city of San Diego and its surrounding areas. When the date arrived, a total of eighteen beautifully maintained classic cars showed up to Chicano Park, eager to see what was behind the flyer. Of those eighteen cars that showed up, only ten of them decided to stay and help start the car club.

The club needed direction, and those on hand began the intimidating task of coming up with a name for the club that defined the shared enthusiasm they all felt for classic cars. There were three or four names being kicked around by everyone there, yet no one could agree on any of them. While discussing the name, the group was listening to oldie tracks and one of them said “Hey! we like to listen to oldies and we have oldies cars, why don’t we call ourselves “Oldies?” Everyone liked the sound of it and they all agreed on naming the club Oldies, a name that still defines the club to this day.

Excited, the club members began searching for plaque ideas immediately, and they also worked to choose the club colors that would define their dress code. The members decided to have Oldies written in Old English lettering for their design and had the plaque made out of brass. The club colors consisted of black shirts with white letters. Finally, the united front of Oldies Car Club was born, and as time went on, the club’s membership began to increase. As fate would have it, the club was about to get even bigger.

In 1981, an Oldies club member from San Diego drove up to Los Angeles and saw a young man wearing a hat that read “Oldies.” Not wanting to leave himself with any doubt of what his hat meant, the San Diego member approached him and asked what it stood for. The man told him that it stood for a car club named Oldies out of the San Fernando Valley. With no animosity, the San Diego member explained that he was also in a club called Oldies in San Diego. On June 28, 1981, the Oldies of San Diego invited the members of the San Fernando Valley Oldies and their families to come down to Chicano Park to have a good time with them. It was there that both clubs realized that they shared a common interest in older cars and the idea to come together and form one club was agreed upon.

Now that the club had officially merged the two groups together, the only difficulty came in trying to combine the pre-existing styles of both clubs. At the time, the SFV members sported brown shirts with block letters that had a wave-like manner to them, while the San Diego members had black shirts with white letters in Old English. Instead of embracing one or the other, both groups decided to form a new look, settling on black shirts with yellow letters and an Old English letter font arranged in a wave-like manner to represent the newfound unity between both clubs. The new plaques read “Oldies Car Club” and had no mention of the area that they were from, in order to show unity amongst themselves and solidarity. Currently, the club has both types of plaques; laser cut and brass. “We leave it up to the member on what kind of plaque they want to fly, we have no regulations on that,” explains George Mirzoian, the Vice President of the San Fernando Valley chapter.

Within time, the Oldies car club started growing and opening up different chapters throughout the states. “I think that if it wasn’t for Ricardo, the club wouldn’t be as big as it is,” says George. Oldies car club was crowned Lowrider Car Club of the Year in 1997 and again in 2005. “It’s hard for a club like us to be strong at the shows with numbers since we are a ’60 and under club,” George says. This is one rule that the club sticks to, and when they say ‘60s and under, they mean it; you will never see a ’61 or newer car flying the Oldies plaque. “We have two Club of the Year titles, and we would like another if they ever have the category again,” says George. “We may not have that many cars, but we have a lot of quality cars in the club,” he says proudly.

Oldies have always been a very active car club and still is today. The club does their part to help out the community and they host plenty of charity events, including toy drives and fundraisers. The club also throws their annual car show every year at one of Los Angeles’ high schools, San Fernando High School. “We had over 500 car entrees at our 2011 car show, which is big for the San Fernando Valley,” smiles George.

After almost forty years, the Oldies car club is still going strong and they remain positively involved in their communities while upholding the Lowriding way of life.