Newsletter
Sign Up today for our FREE Newsletter and get the latest articles and news delivered right to your inbox.
Home » Leroy & Kenny Gonzales – Lowrider Original 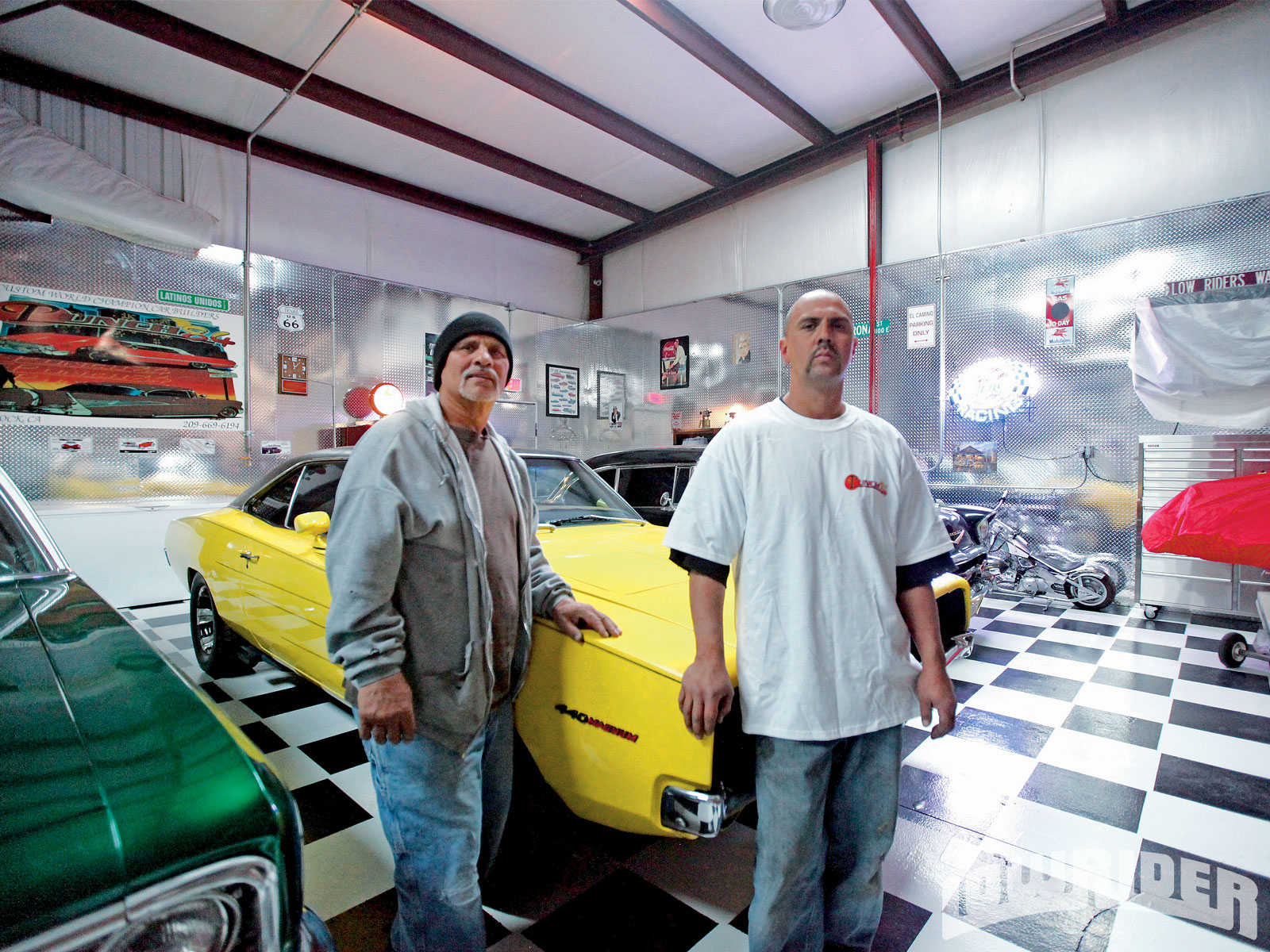 When my first assignment for Lowrider Original came in, I was pleased to find out that it was Leroy and Kenny Gonzales, owners of Truck of the Year, “Punch 84,” and Punch 84 Customs in Delhi, CA. Being from the same town, I decided to go pay them a visit at the shop. As I pulled up into the parking lot, I noticed the crew working late into the night on a ’53 Dodge pickup. The truck was scheduled to show and compete at the famous American Graffiti show in Modesto, CA, that same weekend, so the boys were burning a little midnight oil to get the build finalized. The show, on average, pulls in about 1,000 entries each year, and this year was no exception. Delivering the truck to the owner in time for the show, the father and son team were pleased to find out that their build took 20th out of 935 entries. “Not bad for not having any body mods,” says Leroy proudly. Scheduling the date and time to sit and chat with the father and son team that had built such award-winning cars as “Strictly Business,” “Funky ’51,” “Shop Laggard,” “Hawaiian Punch,” “Punch ’84,” and multiple others was something I had been looking forward to for quite a while.

As we sat in the new shop with the Gonzales family, Leroy began to explain to me how he grew up in a town called Marfa, TX, and that the town was so small, they had vocational AG in high school; however, they only taught you how to stick weld and lacked any mechanical or automotive courses. All through high school, Leroy and five close friends would always spend their days working on cars. He and his buddies would modify cars with what little tools and expertise they had. They used to experiment by going to junk yards and taking parts from different cars to adapt them to their own cars. “My first modification was adapting a ’56 Pontiac bumper to my ’55 Chevy,” explained Leroy.

The young but jobless eighteen-year-old Leroy got married to his wife, Elodia, on a Friday and went looking for a job the following Monday. With only a handful of job opportunities in town to choose from, Leroy couldn’t land a job. Not having any other choices, he turned to his last resort, and attempted to get a job at a wrecking yard without any tools or experience. Offering to intern at the yard for a week, Leroy landed the job by showing Bill Matt-Miller, the owner of the wrecking yard, that he was a quick learner and a hard worker. “That’s where I got most of my experience working on cars,” recalls Leroy. “He taught me how to do weld jobs, pull rear ends, drop transmissions and other tricky basics.”

Once Leroy’s wife graduated from the University, they packed their bags and moved to California, where her parents had moved the year prior to her graduation. Moving to Turlock’s West Side, Leroy began his search for a new job. With experience under his belt, he landed his first job in California at S&A Manufacture in Livingston, CA. “Back then, I was making $2 an hour, and I thought I was making good money,” laughs Leroy.

Fast forwarding to the future, Leroy bought his son Kenny a two-door ’57 Bel Air for his 13th birthday. The youngster got every imaginable ticket in that car. “From exhibition of speed, to unsafe lane changes, to hit and run, and even getting in high speed chases with police,” exhales Leroy. He can laugh about it now, since luckily, Kenny got everything except a DUI – since he’s not a drinker. Still, his son’s love for automobiles was genuine, and Kenny, who had learned everything about customizing cars from his dad, would come home from school to find several cars parked in front of his parents’ house. They would be dollar signs to him, as they were parked for him to lower them, which he used to do with a torch for side money.

In 1985, Kenny bought what would later become the consecutive Truck of the Year champion, “Punch ’84.” When he started working on “Punch ’84,” Kenny would only take the truck to sound off competitions. Since Leroy was too busy with his job, Kenny did all the wiring and set up on the truck himself. One weekend, Kenny invited his dad to go with him to a sound off competition in Tulare, CA. “I was under the impression that cars would pull up, open their doors, and play rap music for DB’s,” explained Leroy, who isn’t a fan of rap music. When they got there, Leroy was so impressed by the judging and inspections of the cars that he started getting nervous, thinking that Kenny wouldn’t place. With a first place win in his class, Leroy wanted to know what else could be done to improve his son’s truck’s performance. Kenny wanted more power for his truck, and wanted to add a second battery. Not wasting any time, Leroy fabricated a stainless steel box to fit both batteries. Being heavily involved in the sound off competition scene, Kenny started going to Lowrider shows to compete in sound offs. While in line for the sound off competition at a Lowrider show in Stockton, CA, a judge from the show came over to the truck and told Kenny that he would do well if he showed his truck. With a custom grill, shaved door handles, and shaved front and rear bumpers, Kenny took first place in mild custom. “That’s what fired us up to do the show part,” says Kenny excitedly, adding “the mods weren’t put on the truck to compete; they were added to make the truck look nicer.” After that show, the duo began doing modifications for competition.

Always doing well at shows in Northern Cal, Kenny’s “Punch ’84” would always fall short of the first place trophy in Tulare to a truck called “Wicked.” Next time they showed in Tulare they again got second behind that pickup truck. “That day we came home and decided to tear the truck down and go ballistic and chrome every possible inch of that truck,” declares Kenny. “There is nothing in that truck that isn’t plated, down to the 24k spark plugs, and neck on distributor; we plated everything.”

Between the father and son team, they tore “Punch ’84” down to the ground, and did all the metal fabrication and body modifications themselves. They reconstructed the whole floor, making the firewall and inner fender walls flat, so that the truck would be able to take the quarter inch mirror glass. “When we were building the truck, friends would come over and see some of the things that we were building,” says Kenny. “Before we knew it, we were getting requests to build similar items for their rides.” In 1989, they started doing a lot of side work for people, so much so that in 1991, they made it an official shop. “We never meant to start a shop, it just kind of happened,” Kenny explained with a grin.

In ’95, Leroy and Kenny took home the Lowrider Magazine “Truck of the Year” championship at the Los Angeles Super Show. The following week, they took “Punch ’84” to Oakland, CA, for the 45th Annual Grand National Roaster show, where they beat out every truck there. At that show, they were approached by a promoter from Sweden who wanted to take the truck overseas. “Punch ’84” went on a tour in Europe, where it brought back championships from Sweden, England, and Denmark.

“I got so bored of sitting around at the shows, that I started helping Larry Gonzales park the cars at the events,” Leroy says. “Next thing I know, Larry started sending me checks. I just did it to help him out.” One year, Larry called up Leroy and told him, “I need you to come to Los Angeles; you’re going to be working for Lowrider Magazine full-time.” Leroy started by parking cars and making sure that everything was okay according to the fire marshal. Next, he became the head judge for the trucks and bicycles. “My wife began registering cars at shows before becoming the first female judge for Lowrider Magazine. She was in charge of judging the bikes and motorcycles,” Leroy says with pride. Once Punch ’84 was retired, Leroy also joined the Lowrider Magazine staff as a judge.

The father and son team faded away from the Lowrider scene to do some industrial work for Gallo Winery in Livingston, CA. Now they’ve flipped back to doing cars again. The duo is currently building everything from motorcycles, to custom rods, and everything in between. “We are opening our avenue,” says Leroy. With about twenty years of customizing cars under his belt, Leroy hopes to only do it for a few more years before retiring. With Leroy’s wife, Elodia Gonzales handling the books, and Kenny’s wife, Bernadette Gonzales, handling all the marketing and promotional work, the “Punch ’84 Customs” shop is a family owned company in full swing. They hope that Kenny and Bernadette’s youngest sons, Antonio and Santana, will take over the shop someday.